This year’s Met Gala theme was ‘tech white tie,’ which is pretty broad, and the celebs didn’t disappoint us either in coming up with some inspiring ensembles. The gala was to celebrate the opening of the Metropolitan Museum of Art’s Manus x Machina exhibition.

And now, without further ado, let’s take a look at what fashion’s biggest names are wearing for the annual star-studded event.

Everyone’s favorite pop star, Taylor Swift, shunned ‘that red lip classic thing’ in favor of a vampy dark lip color, her newly acquired bleached blonde hair, and a Louis Vuitton mini dress. To round out her look, she donned a pair of knee-length strappy stilettos.

Naomit Watts walked the Met Gala red carpet with a techno-inspired Burberry gown, which was complemented by her vintage hairstyle and classy jewelry.

Taylor Swift’s BFF and a pop star in her own right, Gomez graced the Met Gala red carpet in a Louis Vuitton dress paired with a fitted sleeveless leather jacket and a pair of sturdy, chunky shiny leather boots.

The supermodel from the Kardashian klan wore an Atelier Versace cutout halter neck gown with geometric prints and minimal jewelry.

Queen Bey wore a figure-hugging skin-tight latex gown from Riccardo Tisci, which was complemented by her flawless makeup. A nude lip color, dark eye makeup, and long blond-highlighted tresses topped off her look.

New couple former One Direction member Zayn and supermodel Gigi walked the Met Gala red carpet together this year. Though donning Versace, Zayn looked like a cyborg-in-progress with two robotic arms. And his supermodel girlfriend wore a grey gown with a choker neck and a sheer skirt.

Oscar winner Vikander wore a Louis Vuitton ensemble, with a red leather bodice and a psychedelic skirt. She paired this with red ankle boots and a pulled back hairstyle.

The Oscar winner wore a cut out gown by Alexander McQueen, and looked like a queen to a distant galaxy with the cape rounding out her look.

The HeForShe ambassador and Harry Potter alum, Watson, wore an off-shoulder Calvin Klein gown with an uneven neckline and a long train.

The ‘Room’ star wore Proenza Schouler cut out glittery dress and paired it with a dark lip color and pulled back hair.

Kanye West and Kim Kardashian West walked the red carpet together, to no one’s surprise. While Kanye wore a pair of ripped jeans, a white t shirt, suede boots, and a bedazzled jacket, Kim K wore a figure-hugging silver gown with a thigh high split. With her hair slicked back, she looked like a slightly younger version of her momager Kris Jenner.

The beautiful actress wore a dress by designer Zac Posen, which lit up in the dark!

The ‘Fifty Shades’ star walked the red carpet wearing a Gucci number, with colorful star motifs over a black gown.

So these are the celebs whose outfits caught our attention at this year’s Met Gala.

Which ones did you find intriguing? Share your thoughts in the comments below. 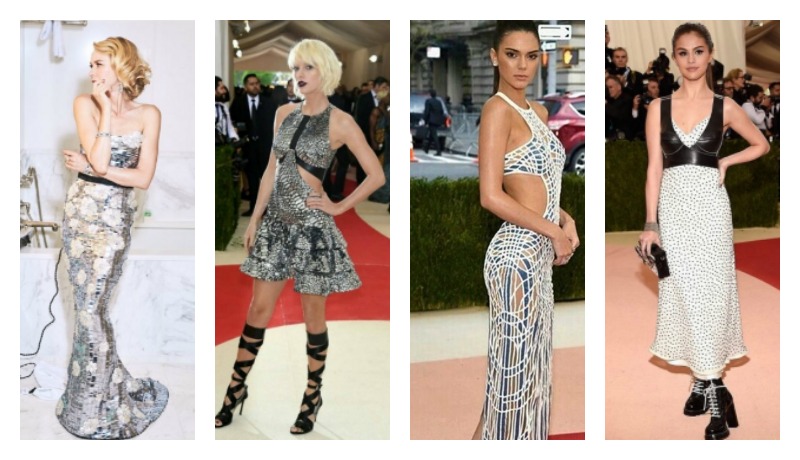 Article Name
15 Of The Best Looks From The 2016 Met Gala Red Carpet
Author
Chaitra Ramalingegowda
Description
The stars descended on the annual Met Gala red carpet, and we just can't get enough of these amazing looks!