Foul is fair and fair is foul!

Here’s to all the girls in the house! Raise your hands if:

All my soul sisters, this piece is about you! To know what your boyfriend things about this gift of yours not from up above but down below ;), keep reading!

1. She is a jerk-magnet because men think that a woman with a dirty sense of humor is available!!!

Oh! Wait! What does that make me?!

But why am I complaining about this? What is in it for me? 😉

Well, it was cute in the beginning. But now, ummm… too graphic!

4. Switching that funny side “off” is next to impossible!

Someone should just use the words “do” and “it” together and all hell’s gonna break loose! To find out how she can text a friend a sly pic of her boss’ wiener-bulge when in pleated pants, is the greatest struggle of her life!

It’s an internal debate for me coz I know my bros are going to absolutely love her and take her as one of one of their own in the pack, but isn’t she supposed to be my girlfriend?! Uh-oh!

6. The better her vein, the grosser the humor!

And when all crabby, she retains the filth minus the hilarity!

7. She will scare the hell out of you, and you, and everybody!

“Colorful vocab” is what she calls that; Humor Nazi would be more pertinent, methinks!

8. Meet the Parents? Have you lost your mind?!

To give you a reference point: Once she saw a picture of my mom, she whispered, “Woah! Your dad’s done a great job on her! Hmmm!! 😉 ”

I rest my case!

9. Phallic-shaped anything will not go unnoticed!

Which is a good thing! Of course, it is! I ain’t saying nothing about that!

“Jam and jelly, what’s the difference?”

And when I’m having a boner, she asks me to make sure there aren’t any dogs home!

She said the same thing to my 14-year old cousin as a part of sex education to teenagers!

I wonder how Bhat and Khamba didn’t bump into her. Wait! Did I just say “Khamba”?!!!

14. If you can’t laugh about a vigorous belch, she thinks you are denying your humanity!

The same applies to sh*tting, eatin, f*cking, so on and so forth!

Allow me to explain this. The gasp, the sigh, the gulp, the fart, the quiff, every single reverberation!

If she has some mayonnaise on her face, yes, she will wipe it off but not before she cracks a soul-stifling joke that must involve you-know-what! <wink><wink>

17. Her sexual advances are exceedingly inappropriate!

And I ABSOLUTELY love that sh*t!

If you too have a girlfriend with an off-color humor, you should thank the Gods! Just jesting! 😉 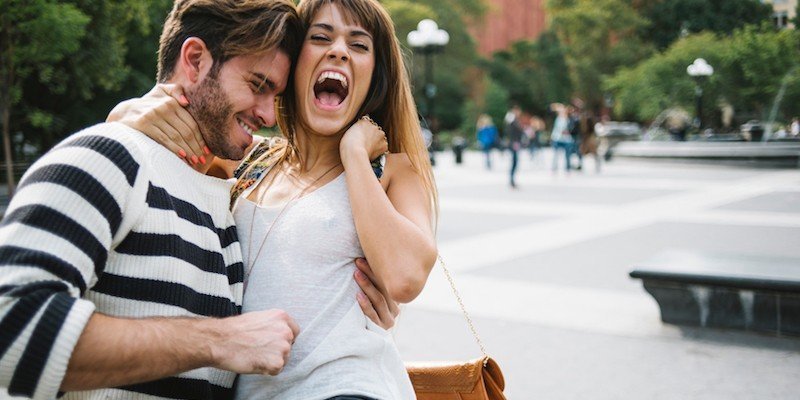 Article Name
17 Things You Will Get If You're Dating A Woman With A Dirty Sense Of Humor
Author
Riya Roy
Description
A dirty sense of humor is a turn-on...bring it on!