After Defeating Cancer, This Is What She Did To Wear Her Wounds Of War With Pride

Meet Nikki Black, a 23-year old comedian from Los Angeles. Just like the rest of us 20-somethings, she was going about the wonders of life when Life dealt her a hard slap. A biopsy of her breast tissue revealed she had breast cancer! 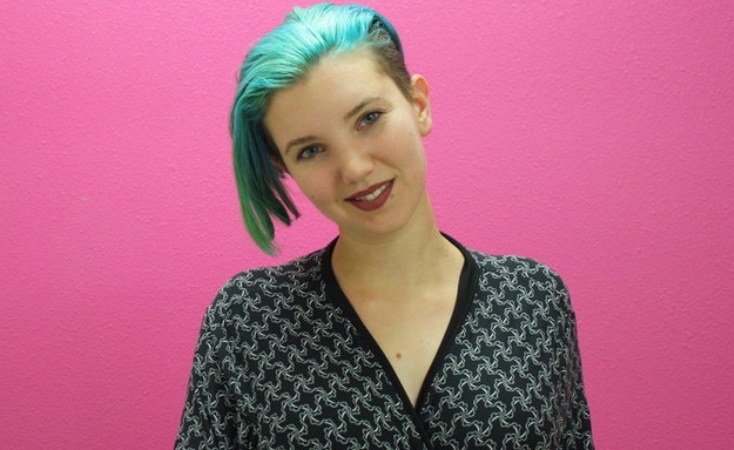 She was practicing comedy in Philadelphia at the time and chose to immerse herself in her work to keep herself from dwelling too hard upon the harsh reality. But she had to face the truth sooner or later and when she decided to go public with her news, the (sexualized) reactions took her by surprise,

“Unfortunately, I began experiencing an open sexualization of my disease I had not anticipated. Immediately, after going public with my diagnosis and posting a video of a cancer set on my Facebook wall, I received messages saying things like “Those were my second-favorite pair of boobs in Philly.”” 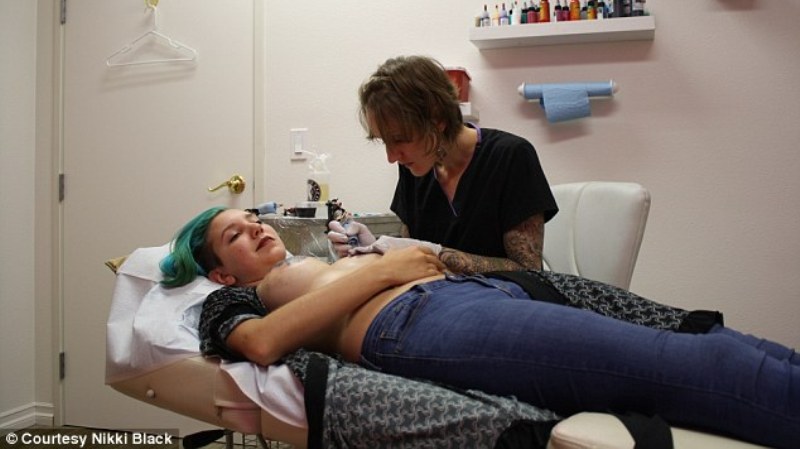 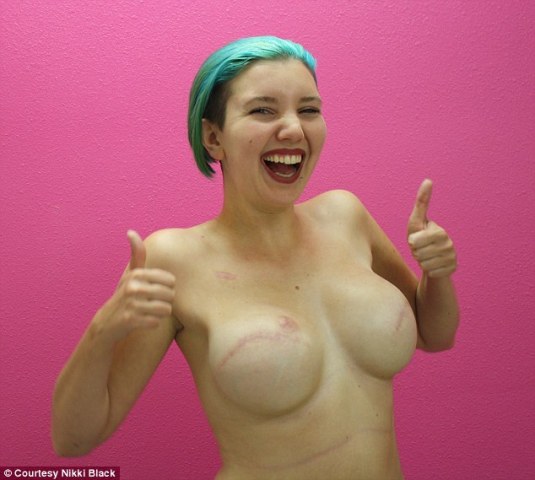 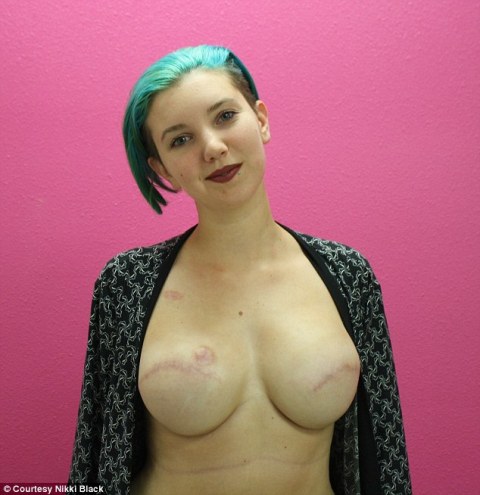 The chain continued, as Nikki, herself, avers,

“People openly asked me how I was going to handle reconstruction before I had even made that decision myself. One guy asked me what size I was going to get and I attempted to answer frankly by saying probably the same size. “Good choice,” he said, then he pointed at my soon-to-be-removed, cancer-filled breasts and added, “And I mean good choice.” I felt like my body was on the chopping block long before I was even in surgery. I was told that I could, at the very least, do some kind of fetish porn which suggested that my post-mastectomy body would be niche, would be other, would be up for consumption.” 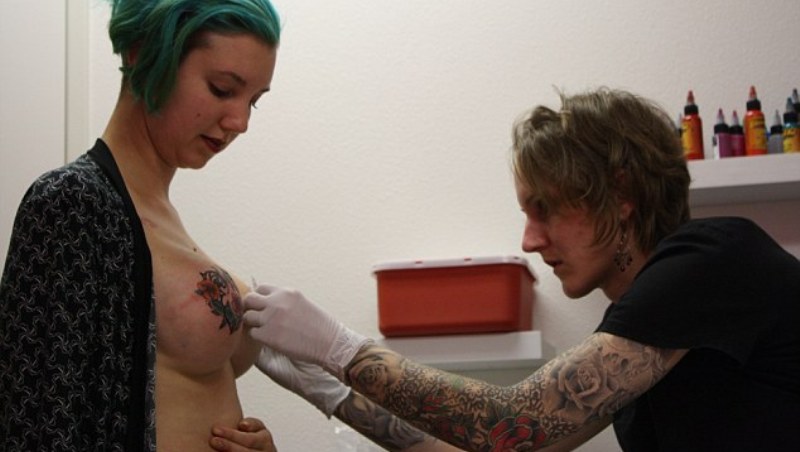 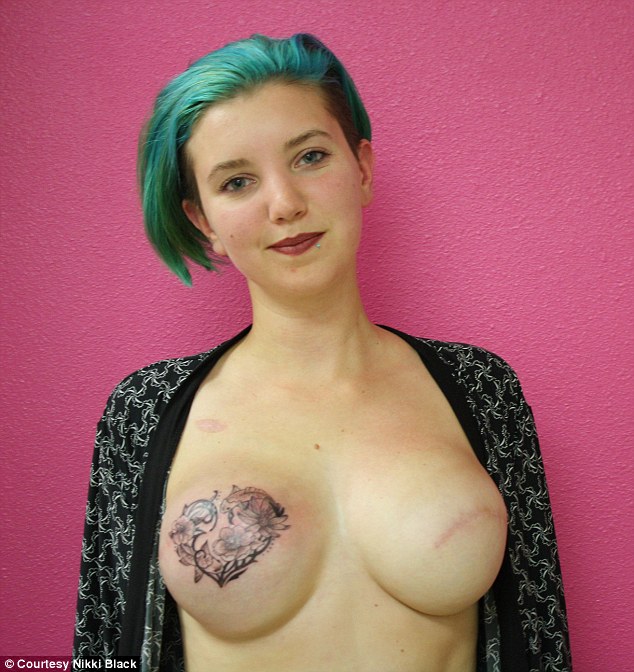 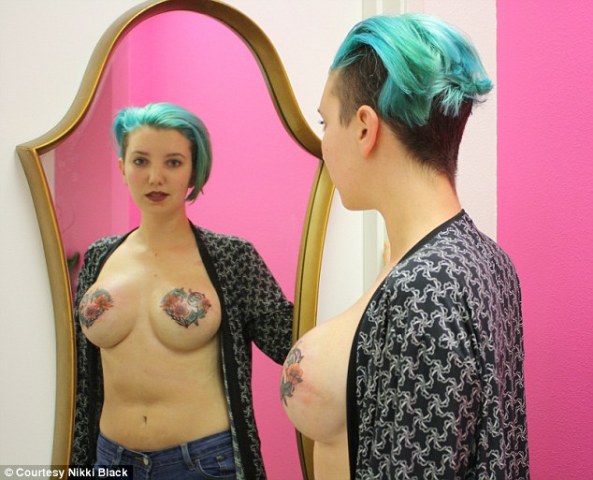 But Nikki wasn’t going to take the blow lying down. After braving the life-changing experience of chemotherapy and double mastectomy, she went for reconstruction and chose not to wear her cancer marks as nominals of the cancer’s victory- but modify them to represent the triumph of her spirit. 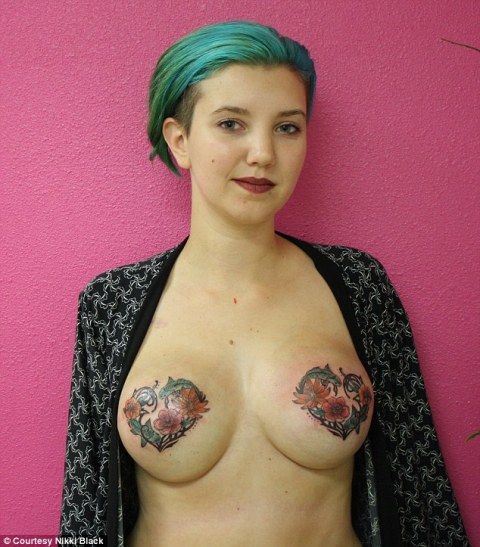 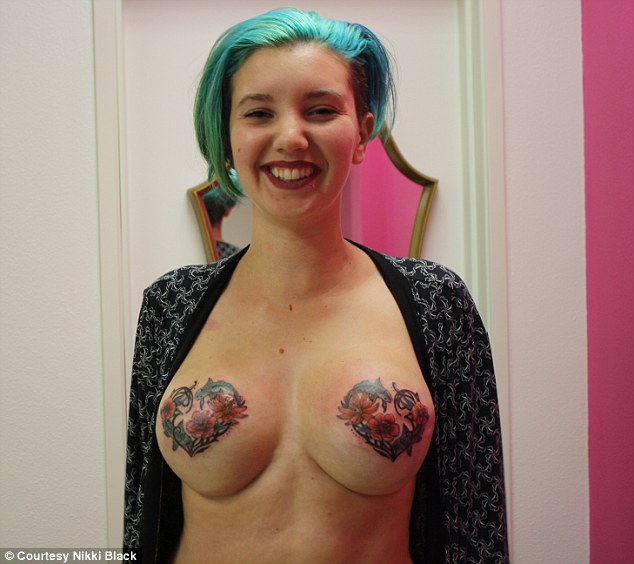 Despite knowing that she couldn’t get her pre-cancer body back, she chose to have floral tattoos in place of nipples to reclaim her body and feel a renewed vigor and energy vitalize her spirit and work. In sharing her experience, she hopes to pass on a crucial message to all breast cancer patients to come out on the other side as proud survivors,

The tattooing was like therapy, a surgery for the soul. Art got me through cancer. I may have felt like I lost that voice for a few months and I will mourn the time I spent shutdown and feeling worthless. It seems appropriate now to have a collaborative effort on my body, a reminder to open myself up to trusting others and give myself over to a support system. I walked away from that experience with a sore chest, minor nausea and an incredible feeling of lightness in spite of the tattoo-aftereffects. At 25, I finally feel renewed and ready to work on the most important piece of all- myself!”

That is one helluva powerful message Nikki and we are sure it will inspire many more to brave the disease! You go girl!

Article Name
This Is How Nikki Black Wears Her Wounds Of Cancer War With Pride
Author
Sejal Parikh
Description
Nikki Black has braved breast cancer and how! Her story is an inspiration!