So you have found yourself the perfect guy, who incidentally is also about a foot and a half taller than you are? I feel you, girl, I feel you.

The struggle of a short girl dating a TALL guy is very much real.

1. People seem to think you don’t realize that he is tall and you are short. So they tell you about it all the time. ‘Wow, he’s really tall!’ ‘Aren’t you a little too short for him?’

2. Borrowing his clothes is out of the question. Unless you want to look like a homeless person who is wearing clothes way too big for them. But heeeey. Large shirts = DIY dresses!

3. But he will lift you and put you on his shoulders in concerts. (Frankly, it’s a whole different world up there- the weather is nicer here!)

4. You starve till he gets home. Because all the cool food stuff is on the top shelf.

5. He can just pick you up and take you anywhere. He’s like a giant with a pet teddy bear.

6. Being the little spoon is the Best. Thing. Ever. You easily fit into his arms. It’s the cutest thing ever.

7. Looking into his eyes romantically = a neck crick.

8. Wearing high heels is useless. And so not worth the pain because he is still annoyingly tall.

10. Kissing him is a real struggle. He tries to bend down as much as he can and you try to do your best ballerina tip toe.

11. But you do get a ton of forehead kisses!

Suggested read: 7 types of creepy guys you bump into when you least expect it

13. When he takes you to hang out with his other ‘tall’ friends, you feel like a child who’s been brought to an adult event.

14. You cannot slow dance. Where do his long arms go? And you keep stepping on his large toes. Ugh. UGHHH

16. You can barely hold his hand. His arm length and yours just don’t match. So you just hold on to his bicep (which is cool, too).

17. The only way you can get a decent picture of you two is when you are both seated. But you do look good when he clicks a picture from above (and also shorter than you really are).

18. But no one ever hits on you when he is around. Have you seen his size?

19. You never have a shortage of blanket. Your tiny legs fit in just fine, even if he tugs on it.

20. You don’t line up in bed. That makes thing ahem, a bit difficult. Hey, not complaining – new moves!

21. You can never hear him in loud places. He has to lean down to your height and repeat everything.

22. You feel sorry for him in airplanes and trains because you have all this excess legroom and he has none.

23. You take the brunt of the short-tall jokes that are guaranteed to come your way.

Bonus point: If it works out with him, you can throw away the apology chit you wrote to your children for making them short! 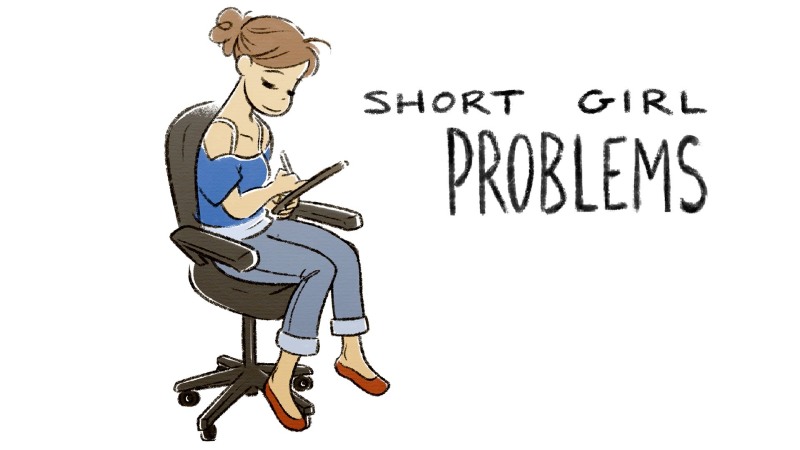 Article Name
25 Things Every Short Girl Dating A Tall Guy Will Relate To
Author
Amrin Talib
Description
Coz a short girl may be tiny, but she has quite a LOT to deal with!