Everyone loves compliments! Your man will love it when you tell him how good that shirt looks on him. The same goes with women, too! But complimenting a girl might be more difficult, because you don’t want it to come off the wrong way. When you are complimenting a girl, you don’t want to come off as patronizing, insincere, or the creepy stalker-kind of guy. You’ve probably fumbled out a compliment to that girl you saw at the pub or at a party, and all she did was smile awkwardly or just walk away, or maybe something even worse?

So, how to compliment a girl without sound like a downright creep who is out to prey on her, is the question on your mind. Yes, she looks beautiful in that dress but here’s the thing – it’s not about what the compliment is, it’s how you compliment her that’s important. The body language, the way you make eye contact, and even how your voice sounds when you say it will make all the difference in the world. How to compliment a girl is a very important thing when you’re trying to make a lasting impression. It shows her that you’re noticing her and that you like what you see. You need to keep it subtle yet direct, without weirding her out.

Suggested read: 15 women reveal the sweetest things to say to your girlfriend

Well, here is how you can do that.

Don’t compliment her just for the sake of it. Compliments for girls are an important signal of where the bond between you two might be heading. For her, it means that you’re paying attention to her and that’s something that she will definitely think about. Don’t give her a compliment simply because you feel like you have to or as a conversation starter. Say it if you really believe it. False compliments and insincere flattery are something you should just stay away from.

Look at her. And, make sure that she notices that you’re looking at her. It’s one of the best compliments that a guy has to offer. No, don’t creep her out by staring at her like you want to drain her of all the blood she has! We can leave that to the vampires. Look at her every now and then like a smitten puppy who can’t take his eyes off her. It will make her smile because I don’t think any girl can resist someone looking at her so lovingly.

Don’t tell her that she’s an amazing person. A hundred other guys have probably said the same thing already and been rejected. She’s probably never even spoken to you all that much, so telling her what kind of person she is will put you in a weak spot. You’ll be complimenting her for an approval instead of actually appreciating her. Pick on something specific even if it is simple, and turn that into a compliment instead of faking one.

This is very important because many men just end up fumbling out something crude that might overtly refer to some sexual attraction or interaction. You don’t want to make the girl think that you’re desperate to get her into bed and get it on with her. If that’s what you want, then try flirting or dirty talking if you are sensing the vibe might be mutual. If you’re looking to compliment her, then try something witty, confident, or just something simple. That’ll work much better.

Again, if you can do this without making her feel uncomfortable, then it will work just fine. It is a tested method and this compliment usually works! Say it as soon as you see her and watch that lovely smile appear on her face. You can compliment her eyes or her hair, but you need to have a good rapport with her if you want it to have a good effect. Someone telling me I have beautiful eyes with a half-hearted look and no enthusiasm is not very appealing. Use the specifics only if you’ve known her for a while or if you’ve been seeing each other for a few months. It’s not just about the words; it is about how you say it and when you say it.

Suggested read: 35 incredibly cute things to say to your boyfriend to make him adore you all the more

Get a little creative and put your knowledge of Shakespeare to use. Writers and poets wrote verses for their sweethearts because obviously it helped in the whole ‘wooing her’ process. It would be amazing if you write something down for her or recite it, but if not, you can use something from what the older generations have left behind (with due credit, of course). If you’re not confident with this, then you can possibly try dropping her a sweet message after you met her or after the date. Or, you can go old school and try writing her a letter or get her a card. That will work too.

If you don’t know much about her, then pick from what you know about her. Whether she’s a karaoke singer or a coder or anything under the sun, just compliment her on it. Did you notice how well she knows her whiskey? Or how much you like her taste in music? Then tell her that! It doesn’t matter what it is, because something like that will definitely make her happy. So start noticing if you haven’t already. It will work as a good compliment as well as a conversation starter.

Composure is necessary for just about everybody, and you should remember this if you don’t get the reply you expected. If she laughs at your compliment or calls you too cheesy and you don’t like it or didn’t expect that reaction, then you just need to smile and kiss her and tell her that you mean it. She’ll believe it and accept it as a compliment the minute it starts sounding sincere and not desperate to her in her head. So, keep your composure intact.

Now, I’m not all for chivalry because you know, even women can open doors for men and all that! But a little chivalry means that you care about her and it’s all about making her feel special. Paying attention to her and making sure that she’s having a good time is a compliment in itself. It will make her feel wanted and she is bound to notice how much effort you put into taking good care of her even though she might not have needed it.

10. Think of how it would make you feel

If you’re still worried about how it might sound, think about how you’d feel if someone gave you the same compliment. Think about what she might worry about or how she might react to it once you’ve said it out loud. Take it out of context and see if it might make you or anyone else even a little bit uncomfortable. If it does make you feel uncomfortable, then you probably shouldn’t be saying it to her either.

When you finally figure out and learn how to compliment a girl, things will get better for you. Complimenting her is the same as flirting with her, though if things go well, you can get to flirting with her too. If you don’t know what compliment to give her, then try thinking about what stands out about her. You can go for her eyes, hair, fragrance, or voice, and if you’ve known her for a while, maybe her lips too. It doesn’t have to be just these. These are personal, yet safe. If you want to say anything ‘sexier,’ then make sure you’ve gone on at least three successful dates.

Also, remember that sincerity is very important when you compliment a girl. Keeping it spontaneous is always a good option. The minute you lay your eyes on her, what do you think? As long as it isn’t overly sexual, it will be a sincere compliment – straight from the heart.

But don’t lose hope if things don’t work out as you hoped they would. These skills take a bit of time and practice; so if you get them wrong occasionally, don’t feel bummed out. Try to get to know the lady well and try again if you can. Like someone said, it is never too late for a compliment because women (and everyone else too) love it! 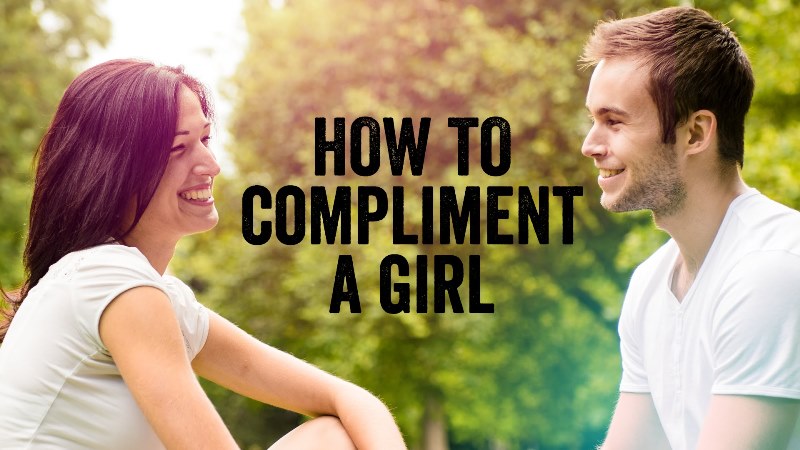 Article Name
How To Compliment A Girl And Make Her Blush With Pleasure In 10 Easy Steps
Author
Deepika Singhania
Description
Wondering how to compliment a girl without coming across as a creep? Here's how to successfully do it and make her blush - in 10 easy steps!