One Of America’s Greatest And Most Original Poets, Emily Dickinson

Emily Dickinson is one of America’s greatest and most original poets of all time. She took definition as her province and challenged the existing definitions of poetry and the poet’s work. Like writers such as Ralph Waldo Emerson, Henry David Thoreau, and Walt Whitman, she experimented with expression in order to free it from conventional restraints. Like writers such as Charlotte Brontë and Elizabeth Barrett Browning, she crafted a new type of persona for the first person. The speakers in Dickinson’s poetry, like those in Brontë’s and Browning’s works, are sharp-sighted observers who see the inescapable limitations of their societies as well as their imagined and imaginable escapes. To make the abstract tangible, to define meaning without confining it, to inhabit a house that never became a prison, Dickinson created in her writing a distinctively elliptical language for expressing what was possible but not yet realized. Like the Concord Transcendentalists whose works she knew well, she saw poetry as a double-edged sword. While it liberated the individual, it as readily left him ungrounded. The literary marketplace, however, offered new ground for her work in the last decade of the 19th century. When the first volume of her poetry was published in 1890, four years after her death, it met with stunning success. Going through eleven editions in less than two years, the poems eventually extended far beyond their first household audiences.

Here are some of the best poems by Emily Dickinson that I encourage you to read.

I taste a liquor never brewed –

From Tankards scooped in Pearl –

Not all the Frankfort Berries

Yield such an Alcohol!

And Debauchee of Dew –

From inns of molten Blue –

When “Landlords” turn the drunken Bee

Out of the Foxglove’s door –

When Butterflies – renounce their “drams” –

I shall but drink the more!

Till Seraphs swing their snowy Hats –

And Saints – to windows run –

To see the little Tippler

Leaning against the – Sun!

By those who ne’er succeed.

To comprehend a nectar

Not one of all the purple Host

Who took the Flag today

Can tell the definition

So clear of victory

As he defeated – dying –

On whose forbidden ear

The distant strains of triumph

Were I with thee

Wild nights should be

To a Heart in port –

Done with the Compass –

Done with the Chart!

I felt a Funeral, in my Brain,

And Mourners to and fro

That Sense was breaking through –

And when they all were seated,

My mind was going numb –

And then I heard them lift a Box

And creak across my Soul

With those same Boots of Lead, again,

Then Space – began to toll,

As all the Heavens were a Bell,

And Being, but an Ear,

And I, and Silence, some strange Race,

And then a Plank in Reason, broke,

And I dropped down, and down –

And hit a World, at every plunge,

And Finished knowing – then –

A Bird, came down the Walk –

He bit an Angle Worm in halves

And ate the fellow, raw,

And then, he drank a Dew

From a convenient Grass –

And then hopped sidewise to the Wall

To let a Beetle pass –

He glanced with rapid eyes,

That hurried all abroad –

He stirred his Velvet Head. –

I offered him a Crumb,

And he unrolled his feathers,

And rowed him softer Home –

Than Oars divide the Ocean,

Too silver for a seam,

Or Butterflies, off Banks of Noon,

Leap, plashless as they swim.

Because I could not stop for Death –

He kindly stopped for me –

The Carriage held but just Ourselves –

We slowly drove – He knew no haste

And I had put away

My labor and my leisure too,

We passed the School, where Children strove

We passed the Fields of Gazing Grain –

We passed the Setting Sun –

The Dews drew quivering and Chill –

For only Gossamer, my Gown –

My Tippet – only Tulle –

We paused before a House that seemed

A Swelling of the Ground –

The Roof was scarcely visible –

The Cornice – in the Ground –

Since then – ’tis Centuries – and yet

Feels shorter than the Day

I first surmised the Horses’ Heads

My Life had stood – a Loaded Gun –

In Corners – till a Day

And carried Me away –

And now We roam in Sovreign Woods –

And now We hunt the Doe –

And every time I speak for Him

And do I smile, such cordial light

It is as a Vesuvian face

Had let it’s pleasure through –

And when at Night – Our good Day done –

I guard My Master’s Head –

’Tis better than the Eider Duck’s

Deep Pillow – to have shared –

None stir the second time –

On whom I lay a Yellow Eye –

Or an emphatic Thumb –

Though I than He – may longer live

For I have but the power to kill,

Without – the power to die –

Tell all the truth but tell it slant —

Too bright for our infirm Delight

As Lightning to the Children eased

The Truth must dazzle gradually

Or every man be blind —

This is all we have on today’s post on the Best Poems By Emily Dickinson. This is, however, not an exhaustive list, and if we have missed out on some of your favorites, then please feel free to add them in the comment section below. 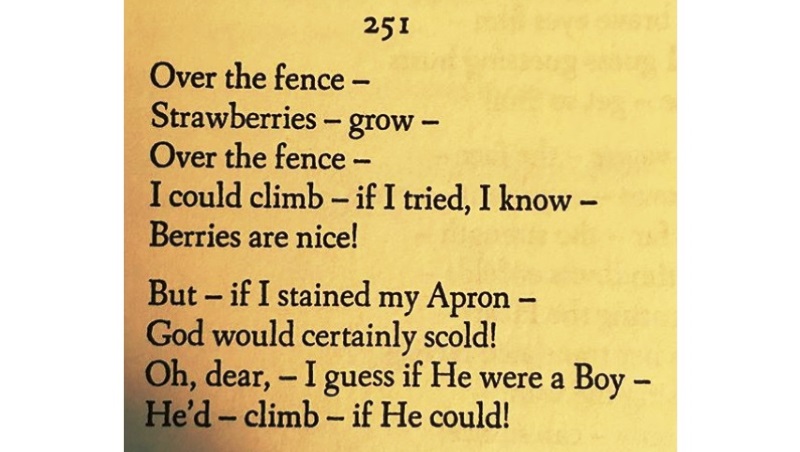