Chivalry, it seems, has gone out of fashion. While some women rue its gradual disappearance, some others cheer the same, stating that it’s old-fashioned. It’s all in the individual perspectives, I guess. So, aimed at the women in the former group, a new dating app, Dapper, has entered the mobile dating app scene. Dapper hopes to bring chivalry back by making its male users sign a “gentleman’s pledge.”

Here are the details.

Dapper was launched on November 16th, 2014, in New York City. Just like on Tinder, Dapper users sign up using their Facebook accounts, and the app matches up users based on location and mutual availability. And just like on Tinder, users can “like” a prospective date. But the similarities end there. 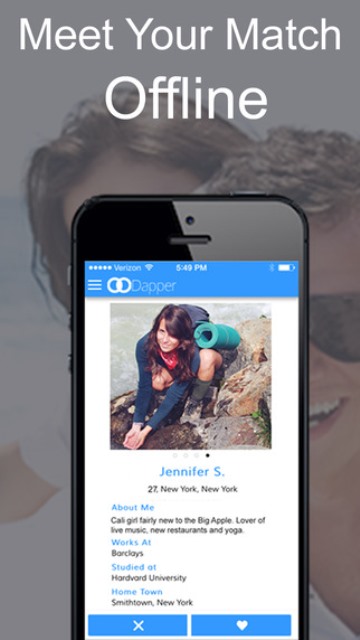 Dapper app page showing the profile of a prospective date

Once two users have expressed mutual interest based on pictures and basic information taken from their respective Facebook profiles, Dapper sends them on a date to a bar or a restaurant. The parent company has tied up with various New York restaurants like Midtown East’s VinoTapa and the Lower East Side’s Barramundi Bar to name a few. And Dapper dates get the first drink free, with the following drinks and / or dinner to be paid by the dates – based on how it’s going.

Oh, and in keeping with the concept of chivalry, three major aspects of the app jump out: first, female daters decide in which neighborhood to meet; second, men pay more than women to go out on a Dapper date. While men are required to shell out $19 per date, women pay a measly $9. And third, men have to sign the “Gentlemen’s Pledge,” much like what Barney Stinson spouted on How I Met Your Mother about “Bro Code.” 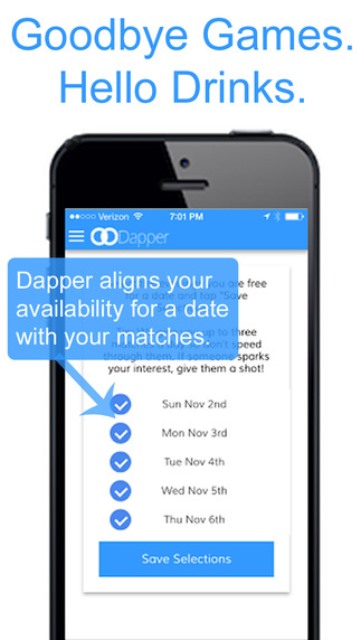 Dapper app page showing the available dates of a user

Here’s the “Gentlemen’s Pledge” in its entirety:

“My intention for using Dapper is to meet someone for a real romantic connection. I understand that Dapper collects feedback after my dates and will end my membership if I have acted in a non-gentlemanly fashion. I will not push for sex on the first date. I will be courteous at all times. I know how to dance, at least a little bit. I know the difference between confidence and arrogance. I believe that chivalry is not dead. I know how to cook at least one good meal.”

Another aspect that differentiates Dapper from Tinder and other such apps, is the fact that before the actual in-person date, there is no way to communicate for two mutually ‘liked’ users, meaning, there is no messaging / chat facility. While this sounds refreshing for someone who hates small talk and values fact-to-face interaction, it is bothersome for those who would want to vet their dates before actually meeting them offline.

According to Josh, the absence of the chat facility helps foster in-person communication: “If you believe that you have to talk to somebody face-to-face to get that chemistry, this is the app that will do that for you so you don’t end up wasting all that time online.” He also added that chatting on a dating site can make women vulnerable to lewd photos and comments from anonymous male users.

Agreed, that meeting someone without actually having talked / chatted with them seems a bit daunting. But the rationale behind no chat facility was the survey that Dapper conducted in July, of 400 single New Yorkers. Apparently, among the singles who participated in the survey, 35 percent considered online correspondence before a date useless. And almost 50 percent of them said online dating in general, was too much work.

And as mentioned in the Gentlemen’s Pledge, the app collects information from the women on how the man behaved on their dates. Three demonstrations of behaving in a “non-gentlemanly fashion,” that man will be kicked off the app.

All these seem like good precautions taken by the app to make it ‘female-friendly’ along the lines of other such apps – Siren, The Grade, The Catch, Bumble. But if you read the Gentlemen’s Pledge, you’ll notice that almost all of it seems arbitrary. Take for example, ‘confidence’ and ‘arrogance.’ Both words are open to interpretation and are purely subjective. And based on these subjective terms, men may or may not be kicked off the app.

Although Dapper’s intentions are pure in the hopes of making it easier for women to avoid douchebags and a-holes, it is not a foolproof method to avoid them. But, we do commend them for their efforts to clean up the mobile dating app world. Here’s wishing them good luck!

Article Name
Dating app, Dapper, hopes to bring chivalry back
Author
Chaitra Ramalingegowda
Description
To the already serpentine list of mobile dating apps, a new player, Dapper, is added. It hopes to bring back old-fashioned chivalry. Here are the details.