“I Passed Into The Dusk”: Some Of The Best Works By Ivor Gurney

“Ivor Bertie Gurney was an English poet and composer, particularly of songs. He was born and raised in Gloucester. He suffered from manic depression through much of his life.”

Here are some of the best poems by Ivor Gurney.

Out of the smoke and dust of the little room

With tea-talk loud and laughter of happy boys,

I passed into the dusk. Suddenly the noise

Ceased with a shock, left me alone in the gloom,

To wonder at the miracle hanging high

Time passed from mind. Time died; and then we were

Once more at home together, you and I.

The elms with arms of love wrapped us in shade

Who watched the ecstatic west with one desire,

One soul uprapt; and still another fire

Consumed us, and our joy yet greater made:

That Bach should sing for us, mix us in one

The joy of firelight and the sunken sun.

Watching the dark my spirit rose in flood

On that most dearest Prelude of my delight.

The low-lying mist lifted its hood,

When I return, and to real music-making,

And play that Prelude, how will it happen then?

Shall I feel as I felt, a sentry hardly waking,

With a dull sense of No Man’s Land again?

As I went up by Ovillers

In mud and water cold to the knee,

That walked abreast and talked of me.

That walks the dark unfearingly;

Soon he’ll come back on a fine stretcher,

And laughing for a nice Blighty.’

No kind of lucky chance I see;

One day he’ll freeze in mud to the marrow,

Then look his last on Picardie.’

Though bitter the word of these first twain

Then live one hour of agony.’

Liars the first two were. Behold me

At sloping arms by one – two – three;

Waiting the time I shall discover

Whether the third spake verity

After the dread tales and red yarns of the Line

Anything might have come to us; but the divine

Afterglow brought us up to a Welsh colony

Soft foreign things. Then we were taken in

Oilsheets, and there but boys gave us kind welcome,

So that we looked out as from the edge of home,

Sang us Welsh things, and changed all former notions

To human hopeful things. And the next day’s guns

Nor any Line-pangs ever quite could blot out

Candles they gave us, precious and shared over-rations—

Ulysses found little more in his wanderings without doubt.

‘David of the White Rock’, the ‘Slumber Song’ so soft, and that

Beautiful tune to which roguish words by Welsh pit boys

Are sung—but never more beautiful than here under the guns’ noise.

Suggested read: #NaPoWriMo These Poems Will Break Your Heart In The Most Beautiful Of Ways

Watching the candle guttering in the draught;

Hearing the great shells go high over us, eerily

Singing; how often have I turned over, and laughed

With pity and pride, photographs of all colors,

Or girls whose eyes were challenging and must dance,

Though in a picture only, a common cheap

(Babies) waiting on Dicky-bird to peep

Out of the handkerchief that is his home

(But he’s so shy!). And some with bright looks, calling

Delight across the miles of land and sea,

That not the dread of barrage suddenly falling

Could quite blot out—not mud nor lethargy.

The pain of them, wide Earth’s most sacred things!

But once—O why did he keep that bitter token

Of a dead Love?—that boy, who, suddenly moved,

Showed me, his eyes wet, his low talk broken,

A girl who better had not been beloved.

He’s gone, and all our plans

We’ll walk no more on Cotswold

Where the sheep feed

Quietly and take no heed.

His body that was so quick

Is not as you

Knew it, on Severn river

Driving our small boat through.

You would not know him now …

But still he died

Nobly, so cover him over

With violets of pride

Purple from Severn side.

Cover him, cover him soon!

Thing I must somehow forget.

One would remember still

Laventie was, as to the line and elm row

Shimmer of summer there and blue autumn mists

Cunning found out at last, and smashed in the unspeakable lists.

And the guns in the smashed wood thumping and grinding.

The letters written there, and received there,

Books, cakes, cigarettes in a parish of famine,

And leaks in rainy times with general all-damning.

The crater, and carrying of gas cylinders on two sticks

(Pain past comparison and far past right agony gone)

Strained hopelessly of heart and frame at first fix.

Café-au-lait in dug-outs on Tommies’ cookers,

The Australian miners clayed, and the being afraid

And the cooler hush after the strafe, and the long night wait —

The relief of first dawn, the crawling out to look at it,

(Though not on Coopers where music fire took at it,

Yet the dawn with aeroplanes crawling high at Heaven’s gate

Of trench food, but the everlasting clean craving

For bread, the pure thing, blessed beyond saving.

Bullets or such for grouse roused surprisingly through (Halfway) Stand-to.

And the shell nearly blunted my razor at shaving;

But Laventie, most of all, I think is to soldiers

The Town itself with plane trees, and small-spa air;

And the clarity, amiability of North French air.

Like water flowing beneath the dark plough and high Heaven,

Music’s delight to please the poet pack-marching there.

Now, youth, the hour of thy dread passion comes;

Thy lovely things must all be laid away;

And thou, as others, must face the riven day

Unstirred by rattle of the rolling drums,

The sense of being, the sick soul doth sway,

Remember thy great craft’s honour, that they may say

Nothing in shame of poets. Then the crumbs

Of praise the little versemen joyed to take

Shall be forgotten; then they must know we are,

For all our skill in words, equal in might

And strong of mettle as those we honoured; make

The name of poet terrible in just war,

And like a crown of honour upon the fight.

When I remember plain heroic strength

Then read the blither written by knaves for fools

In praise of English soldiers lying at length,

Who purely dream what England shall be made

By us, who pay the price that must be paid,

Will freeze all winter over Ypres plains.

Our silly dreams of peace you put aside

And brotherhood of man, for you will see

An armed mistress, braggart of the tide,

Her children slaves, under your mastery.

We’ll have a word there too, and forge a knife,

Suggested read: A Comprehensive List Of All The Poet Laureates Of Britain

This is all we have on today’s post on the Best Poems By Ivor Gurney. This is, however, not an exhaustive list, and if we have missed out on some of your favorites, then please feel free to add them in the comment section below. 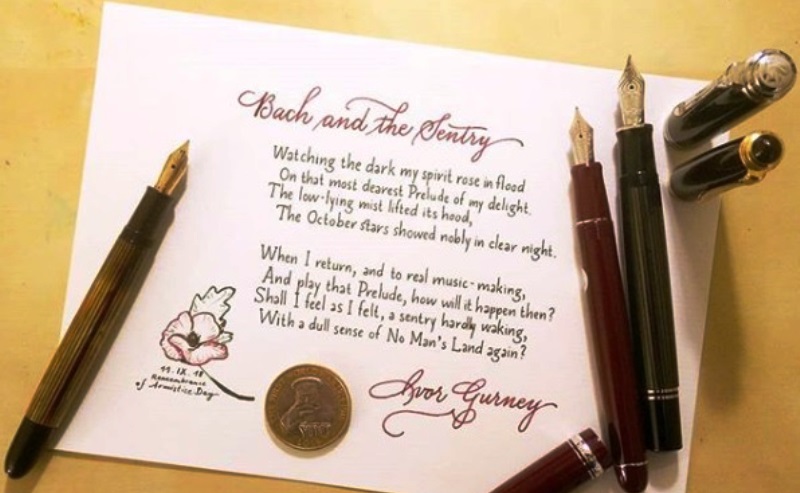 Author
Riya Roy
Description
Here are some of the best poems by Ivor Gurney, the famous English poet and composer.