You know the man. 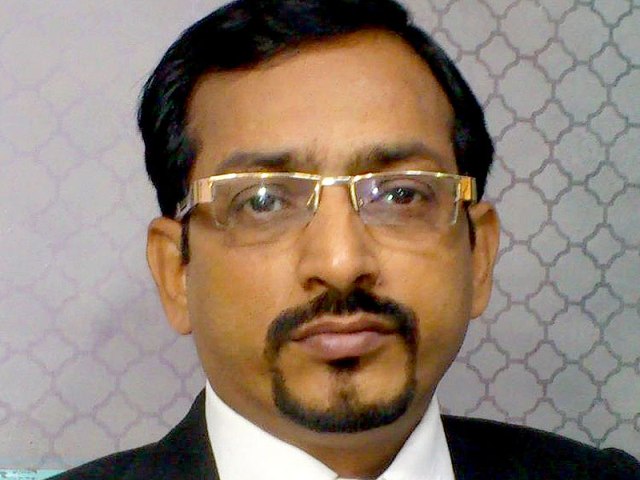 And if that were not enough, the ‘humanitarian’ petition, that failed to get an interim order passed by the chief justice HL Dattu who rightly observed that the step would be a violation of the right to personal liberty under Article 21 of the Constitution, was acceded by the Centre despite its non-basis in any research.

And before they ‘ban’ me for having typed that and attempting to bring about a surge of keyboard activism, let me draft my reply to  Kamlesh Vaswani’s PIL submissions with facts from my own anti-porn-ban PIL.

1. PIL for the “innocent, susceptible, vulnerable”

Vaswani says in his PIL that he is fighting for the fundamental rights of 75 percent Indians who are the “innocent, susceptible, vulnerable women and children of India.”

Suggested read: Why is marital rape an oxymoron in India?

“In 1983, the Metropolitan Toronto Task Force on Violence Against Women commissioned Thelma McCormack to study pornography’s connection to sexual aggression. McCormack’s study indicated that pornography might be cathartic and, so, it might reduce the incidence of rape. Her report was discarded and reassigned to David Scott, a non-feminist committed to anti-pornography, who produced more palatable conclusions. Statistics almost always contain assumptions and biases. Sometimes the bias is an honest one. For example, a researcher who believes that sexual aggression is a learned behavior will naturally ask different questions than someone who believes aggression is an instinct. Other forms of bias are not so honest. For example, when a reporter for the Boston Phoenix asked the radical feminist Susan Brownmiller to supply some evidence for her assertions, she snapped back: “The statistics will come. We supply the ideology; it’s for other people to come up with the statistics.” For the sake of argument, let’s assume that a correlation exists between pornography and rape. What would such a correlation prove? A correlation is not a cause-and-effect relationship. It is a logical fallacy to assume that if A is correlated with B, then A causes B. Both might be caused by a totally separate factor, C. For example, there is a high correlation between the number of doctors in a city and the amount of alcohol consumed there. One does not cause the other. Both result from a third factor: the size of the city’s population. Similarly, a correlation between pornography and rape may indicate nothing more than a common cause for both. Namely, that we live in a sexually repressed society. To further repress sex by restricting pornography might well increase the incidence of rape. Opening up the area of pornography might well diffuse sexual violence by making sexuality more understandable.”

My argument is the same – can you allow for freedom of women, sexual liberalization, and freedom of choice to remain fellow travelers? If not (which, clearly, you have succeeded in doing to an extent), you will simply succeed in keeping antiquated sexual mores, dominant socio-cultural scripts, and sexual hypocrisy intact. This, in turn, will underscore the sexual needs of a nation. I will leave you with Myra Kostash’s answer in relation to the gross violation of the right to liberty you are intent on accomplishing:

“Freedom to read, publish or watch does not necessarily assure a society of justice and peace, but without these freedoms it has no assurance at all.”

As for children, there is no excuse to be made for pedophiles. I’m with you on that one. We do need to take steps to stop the exploitation of children. There is, of course, content on the web that should be kept away from children lest it mess their mental and emotional makeup – but we, as a society, are technologically equipped to prevent that access. For kids who still skirt around security, the issue is one that holds to all forms of access-denial. So, weed out the objectionable material. It is difficult but not unfeasible.

However, an important consideration in the matter is that if curiosity is the animal to blame, then, wouldn’t we do better to undo the mute button we hold ourselves on around children whilst having conversations about sex. Wouldn’t the inane attempt to protect our ‘culture’ by denying our children any sex education be better off banned? Wouldn’t it be better to teach them what they NEED to know to be ‘safe,’ – what they NEED to know so as to not be ‘susceptible and vulnerable?’

You are a smart man, Mr. Vaswani – you know the answer to that one!

He claims that pornography “is like moral cancer that is eating our entire society at every second across country.” He has described it as “a trade more deadly than potassium cyanide.”

And it may interest you to know, Mr. Vaswani, that a regarded scholar of pornography Neil M. Malamauth, who had for decades been a member of your faction and argued for the ills of pornography, conducted a research with Gert Martin and leapt beyond his a priori bias in his paper Self-Perceived Effects Of Pornographic Consumption. In their survey of 688 young Danish adults (men = 316; women = 372), Hald and Malamuth found that respondents construed the viewing of hardcore pornography as beneficial to their sex lives, their attitudes towards sex, their perceptions and attitudes towards members of the opposite sex, toward life in general, and over all. The obtained beneficial effects were statistically significant for all but one measure across both sexes. Now here is the kicker: A positive correlation was obtained between the amount of hardcore pornography that was viewed and the impact of the benefits reaped. This positive correlation was found for both sexes. In other words, the more that one watched porn, the stronger the benefits (for both sexes)!

Moreover, on a personal level, Sir, I’d like to point out that morality is subjective. A short skirt might be immoral for you but even nudity for a twenty-something might be completely okay! And what one finds obscene is not so much about the content as about the mind that ‘judges’ it. You, Mr. Vaswani, find CollegeHumor obscene. There are millions who love it for being so close to reality!

I only have one question there – how many have been killed? Is there a number? Any proof that pornographic content was lurking about in the shadows, with a knife that it could stab the ‘victim’ with after the ‘gratification’ was over?

4. “Worse than AIDS or Hitler”

7. Not an attack on freedom of expression

Hah! I am not even getting started on this one. Didn’t the Chief Justice give you a crisp, pithy statement on the same? That’s my argument. Article 21 – just to refresh your memory.

8. “Mental images can never be erased”

We didn’t even begin the argument on this one, Sir. For a man who seems to indulge in reruns of Sasuraal Simar Ka, I don’t see how a natural process (sex) is so vital to be erased right off the mental slate when the highly unrealistic notions of ‘family dynamic’ as shown in soaps as these that uphold our ‘culture’ can freely rove about our mental landscapes – free to cloud all sense! Seriously, Sir, those images from porn, as long as they stay, in the situated context of healthy sexual expression, are really healthier than any other thing the Indian television is ever likely to produce!

Plus, can you explain marital rapes in these soaps? Or for that matter, the non-criminalization of marital rape in the country?

And that is that.

I rest my case.