When it’s over, I want to say: all my life I was a bride married to amazement. I was the bridegroom, taking the world into my arms.

In today’s #NaPoWriMo post, we will be looking at the 9 best poems by one of America’s most popular modern day poets, Mary Oliver. We hope you enjoy reading these gems, just as much as we did curating them for you.

Here are some of the best poems by Mary Oliver.

There is a thing in me that dreamed of trees,
A quiet house, some green and modest acres
A little way from every troubling town,
A little way from factories, schools, laments.
I would have time, I thought, and time to spare,
With only streams and birds for company,
To build out of my life a few wild stanzas.
And then it came to me, that so was death,
A little way away from everywhere.

There is a thing in me still dreams of trees.
But let it go. Homesick for moderation,
Half the world’s artists shrink or fall away.
If any find solution, let him tell it.
Meanwhile I bend my heart toward lamentation
Where, as the times implore our true involvement,
The blades of every crisis point the way.

I would it were not so, but so it is.
Who ever made music of a mild day?

She sends me news of blue jays, frost,
Of stars and now the harvest moon
That rides above the stricken hills.
Lightly, she speaks of cold, of pain,
And lists what is already lost.
Here where my life seems hard and slow,
I read of glowing melons piled
Beside the door, and baskets filled
With fennel, rosemary and dill,
While all she could not gather in
Or hid in leaves, grow black and falls.
Here where my life seems hard and strange,
I read her wild excitement when
Stars climb, frost comes, and blue jays sing.
The broken year will make no change
Upon her wise and whirling heart; –
She knows how people always plan
To live their lives, and never do.
She will not tell me if she cries.

I touch the crosses by her name;
I fold the pages as I rise,
And tip the envelope, from which
Drift scraps of borage, woodbine, rue.

Every year
the lilies
are so perfect
I can hardly believe

their lapped light crowding
the black,
mid-summer ponds.
Nobody could count all of them —

only so many, they are that
rife and wild.
But what in this world
is perfect?

half nibbled away —
and that one is a slumped purse
full of its own
unstoppable decay.

Still, what I want in my life
is to be willing
to be dazzled —
to cast aside the weight of facts

and maybe even
to float a little
above this difficult world.
I want to believe I am looking

into the white fire of a great mystery.
I want to believe that the imperfections are nothing —
that the light is everything — that it is more than the sum
of each flawed blossom rising and fading. And I do.

Wherever I am, the world comes after me.
It offers me its busyness. It does not believe
that I do not want it. Now I understand
why the old poets of China went so far and high
into the mountains, then crept into the pale mist.

I would like to write a poem about the world that has in it
nothing fancy.
But it seems impossible.
Whatever the subject, the morning sun
glimmers it.
The tulip feels the heat and flaps its petals open and becomes a star.
The ants bore into the peony bud and there is a dark
pinprick well of sweetness.
As for the stones on the beach, forget it.
Each one could be set in gold.
So I tried with my eyes shut, but of course the birds
were singing.
And the aspen trees were shaking the sweetest music
out of their leaves.
And that was followed by, guess what, a momentous and
beautiful silence
as comes to all of us, in little earfuls, if we’re not too
hurried to hear it.
As for spiders, how the dew hangs in their webs
even if they say nothing, or seem to say nothing.
So fancy is the world, who knows, maybe they sing.
So fancy is the world, who knows, maybe the stars sing too,
and the ants, and the peonies, and the warm stones,
so happy to be where they are, on the beach, instead of being
locked up in gold.

And I have seen,
at dawn,
the lark
spin out of the long grass

and into the pink air —
its wings,
which are neither wide
nor overstrong,

fluttering —
the pectorals
ploughing and flashing
for nothing but altitude —

and the song
bursting
all the while
from the red throat.

And then he descends,
and is sorry.
His little head hangs
and he pants for breath

for a few moments
among the hoops of the grass,
which are crisp and dry,
where most of his living is done —

and then something summons him again
and up he goes,
his shoulders working,
his whole body almost collapsing and floating

to the edges of the world.
We are reconciled, I think,
to too much.
Better to be a bird, like this one —

an ornament of the eternal.
As he came down once, to the nest of the grass,
“Squander the day, but save the soul,”
I heard him say.

It doesn’t have to be
the blue iris, it could be
weeds in a vacant lot, or a few
small stones; just
pay attention, then patch

a few words together and don’t try
to make them elaborate, this isn’t
a contest but the doorway

into thanks, and a silence in which
another voice may speak.

“Make of yourself a light,”
said the Buddha,
before he died.
I think of this every morning
as the east begins
to tear off its many clouds
of darkness, to send up the first
signal — a white fan
streaked with pink and violet,
even green.
An old man, he lay down
between two sala trees,
and he might have said anything,
knowing it was his final hour.
The light burns upward,
it thickens and settles over the fields.
Around him, the villagers gathered
and stretched forward to listen.
Even before the sun itself
hangs, disattached, in the blue air,
I am touched everywhere
by its ocean of yellow waves.
No doubt he thought of everything
that had happened in his difficult life.
And then I feel the sun itself
as it blazes over the hills,
like a million flowers on fire —
clearly I’m not needed,
yet I feel myself turning
into something of inexplicable value.
Slowly, beneath the branches,
he raised his head.
He looked into the faces of that frightened crowd.

down the mountain.
All night
in the brisk and shallow restlessness
of early spring

I think of her,
her four black fists
flicking the gravel,
her tongue

like a red fire
touching the grass,
the cold water.
There is only one question:

how to love this world.
I think of her
rising
like a black and leafy ledge

to sharpen her claws against
the silence
of the trees.
Whatever else

my life is
with its poems
and its music
and its glass cities,

it is also this dazzling darkness
coming
down the mountain,
breathing and tasting;

all day I think of her -—
her white teeth,
her wordlessness,
her perfect love.

This is all we have on today’s post on the Best Poems by Mary Oliver. This is, however, not an exhaustive list, and if we have missed out on some of your favorites, then please feel free to add them in the comment section below. 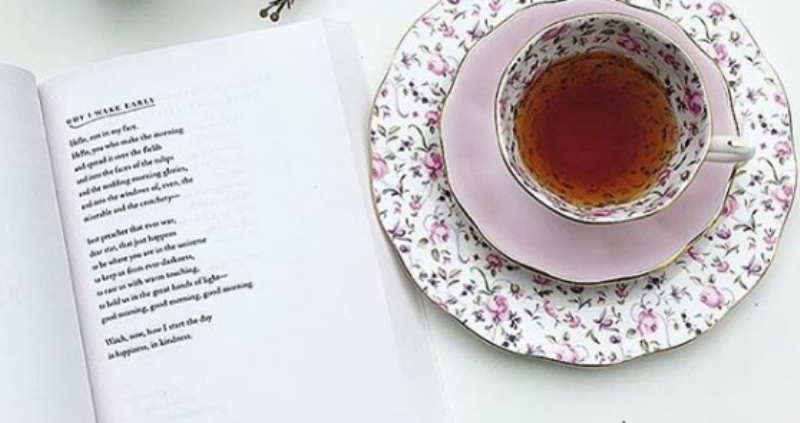 Article Name
#NaPoWriMo Read These Best Poems By Mary Oliver
Author
Riya Roy
Description
In today’s #NaPoWriMo post, we will be looking at the 9 best poems by Mary Oliver, one of America’s most popular modern day poets.