He may not be a real person but he is surely winning the internet, one-forty characters at a time- most times with even less! Meet Pakalu Papito, a guy whose twitter handle has amassed over 850K followers and whose tweets earn over 5K retweets on a minimum! 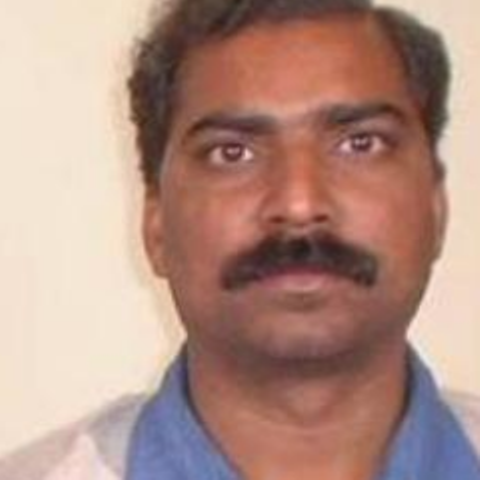 Wondering what is so special about the guy whose twitter name, according to the urban dictionary, means “the act of crashing a camel into a bridge, and not caring about the consequences derived from the act in any way besides feeling a strong satisfaction from doing so?” Well, well….

Equipped with a brutally honest armory, this man fires hilarious tweets on, well, all topics under the sun – or maybe not – he is, by self-admission, a lazy bum! But he sure knows to string his laziness into words that shall not just leave you in splits, but also split you apart from all the laughter. His camel-loving, self-loathing, self-deprecating, and lone humor may not be a breakthrough in the e-avalanche of the meme-scape but as silly and shallow as it may be, it sure is a refreshing change from the Rajnikanth Vs CID jokes that keep popping in our news feeds ever-so-often.

And if you haven’t heard of the man yet, do not worry, we have brought you a yum platter of his most delightful tweets ever.

Disclaimer: We aren’t responsible if these give you an upset stomach. Dig in at your own risk!

be nice to me i may be hot one day

how do i put people on mute

you know what really turns me on? unprotected wifi

4. He has his deep moments, though…

*picks up crying baby* it’s fine buddy when u grow up you will learn how to do this on the inside — pakalu papito (@pakalupapito) June 11, 2015

*plays hard to get by staying at home and having no contact with anyone* — pakalu papito (@pakalupapito) June 8, 2015

10. He offers solutions for global problems too…

11. Coz he knows to rev up the interest rates…

Know what’s on the menu? Me-n-u

18. And that’s how the gag lord shows some swag…

just because i hate me doesnt mean u can — pakalu papito (@pakalupapito) June 3, 2015

19. ‘Mirror, mirror on the wall’ brings him back to the humble hall…

How to set flat stomach: Remove all ur organs — pakalu papito (@pakalupapito) May 31, 2015

I can’t even go to the shop because people think I am Kanye west and want photos with me pic.twitter.com/wCX68iJNsO

my favorite outdoor activity is going back inside — pakalu papito (@pakalupapito) May 30, 2015

25. The painkiller – spit the sarcasm out!

sometimes it physically pains me to hold back my sarcastic comments

26. He teaches us REAL generosity…

today a man knocked on my door and asked for a small donation toward local swimming pool. i gave him a glass of water — pakalu papito (@pakalupapito) May 29, 2015

27. Just like I eat one lettuce leaf and get on the weighing scale…

28. Next time your boss asks for consistence performance… 😛

29. Find the deeper ‘time is an illusory concept’ laid bare in Papito-style…

im having one of those unattractive days i mean years

am i from tennessee? cause i’m the only ten i see

does it look like I’ve goat time for your nonsense? pic.twitter.com/zR2SQaMhpr — pakalu papito (@pakalupapito) May 26, 2015

33. Replacing TGIF with TGIT! What, these Tuesdays are yummilicious…

itunes has got it all wrong the hottest single of the year is me — pakalu papito (@pakalupapito) May 26, 2015

35. And that’s the lipstick I’d like to gift some basic b*tches…

this lipstick would look great on you pic.twitter.com/uAyBAVlODU

the problem with rich people is that i am not one — pakalu papito (@pakalupapito) May 24, 2015

me: better check my phone for texts from friends me: *checks phone* me: better get some friends — pakalu papito (@pakalupapito) May 21, 2015

the only 6 pack i need pic.twitter.com/gwvaN8GsJ7

40. And that’s how you spark some chemistry…or not…

you must be a combination of copper and tellurium cause you are CuTe — pakalu papito (@pakalupapito) May 16, 2015

42. And here Papito corrects the thesaurus…

43. And the best mutual breakup ever…

44. Every dark cloud has a silver lining, eh?

at least i know nobodys using me for my looks — pakalu papito (@pakalupapito) May 3, 2015

45. He gets that beauty is only skin deep…

dont send nudes… send xrays its whats inside that counts

46. Haha, coz the way to Pakalu’s heart is certainly through his stomach…

48. And he has finally unraveled the mystery…

my mom say that everyone has a beautiful side. so i guess im a circle. — pakalu papito (@pakalupapito) April 7, 2015

49. In that case, I guess my parents shoplifted me…

u can only bring sexy back if u have the receipt

50. And oh, I couldn’t help picking this one from Facebook… 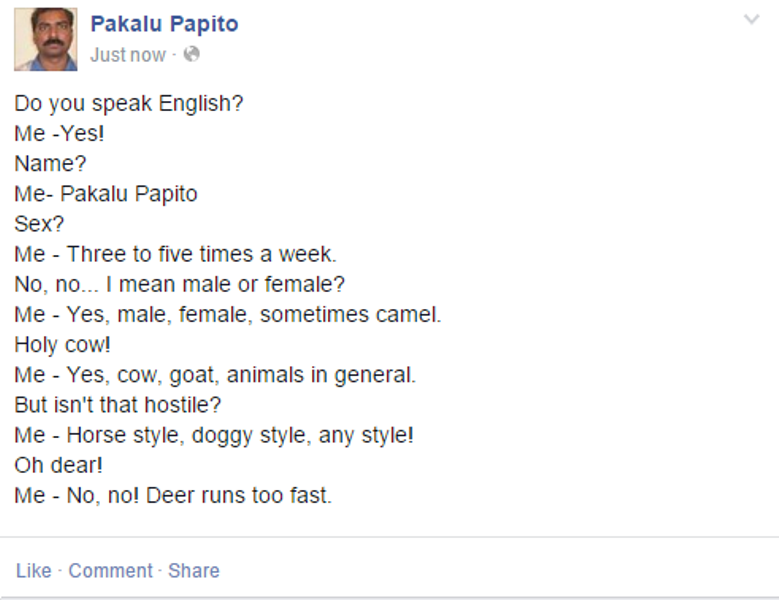 If you found the man funny, punny, gunny or whatever… sorry I ain’t as good as Papito… don’t forget to check out his Twitter handle for more! 😀

Article Name
Meet Pakalu Papito - The Man Whose Tweets Will Leave You In Splits
Author
Sejal Parikh
Description
The new internet sensation, the 'gag lord' of the Twitter-scape, Pakalu Papito, knows how to tickle that funny bone. Check him out at his funniest best!