10 incredible images that broke the Internet in 2015

It’s only been two months and a half since the ball dropped and woopsie, and the Internet has already begun to quiver under the ginormous impact of the ohh-so-@#%^&*-photos!! Well yeah, not all in the category can be really clubbed under one blanket adjective. So without further ado, here are the ten images that broke the internet in 2015: 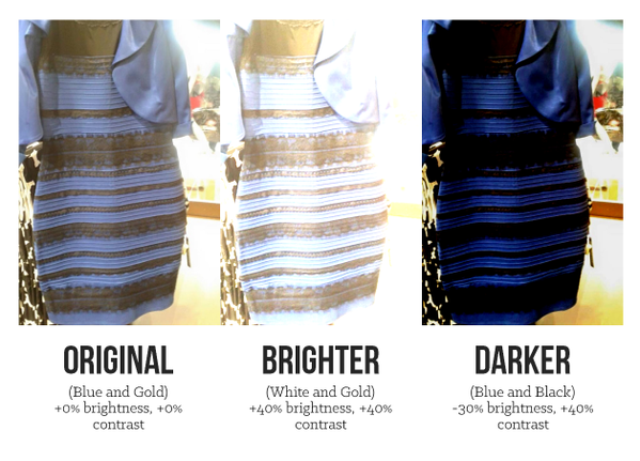 The DressGate controversy actually succeeded in splitting the web into two factions – #WhiteAndGold and #BlueAndBlack. Triggered by a post that first appeared on Tumblr by a user named Swiked who swore that the dress was blue and black, the dress quickly made millions of servers blow up. The dress was shared, tweeted, pinned, and reshared, retweeted, and repinned until not a single soul remained untouched by this short piece of clothing! The maddening confusion and lack of a general consensus about the actual color of the dress was quickly picked up by popular news websites like Buzzfeed and Gawker to fan the flames. Soon, several theories started to pan out explaining why the dress was a specific color. Many of them went ahead and stated that the dress appears differently-colored to different people. We’d just leave it unto you to decide, coz, hey we didn’t say we have the answers! 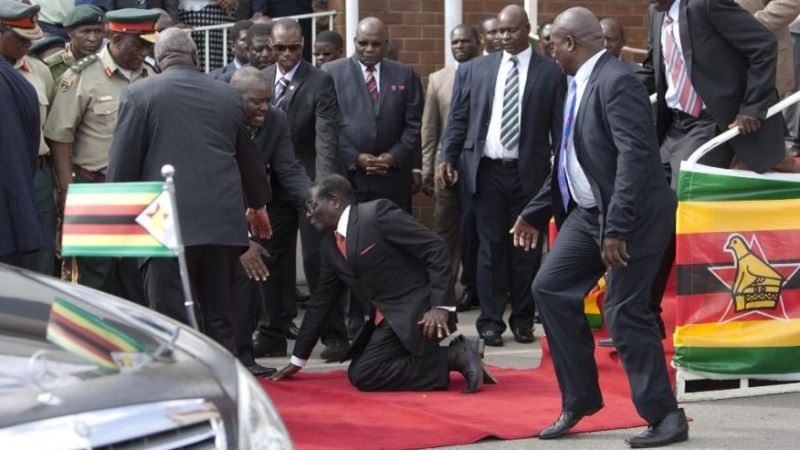 Yes, shortly after being elected as African Union Chairman in Ethiopia, the 90-year old Zimbabwean President missed a step and tripped at Harare International Airport. Though the unfortunate moment was immediately captured by the paparazzi for its ‘breaking news’ section (after all, all news today is breaking news!!), the government officials forced them to take the picture down from all media portals. However, creative minds have used the ‘Humpty Dumpty had a great fall’ moment to their advantage and made #MugabeFalls into a trending topic. Some of the photoshopped images are truly hilarious and the potshots only serve to reiterate the amplifying power of social media.

Suggested read: Benedict Cumberbatch and girlfriend all set to welcome a ‘cumberbaby’! 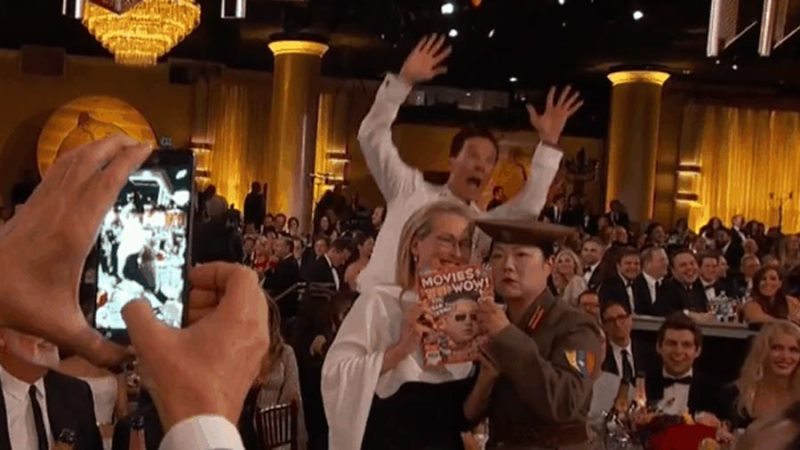 Yes, after his famous photobomb jump behind U2 with a goofy expression at the 86th Academy Awards, the man has done it again. Whilst the first stint had by no means gone unnoticed, Benedict Cumberbatch has repeated that epic ‘photobomb’ moment again. At the 72nd Annual Golden Globe Awards, actor Benedict ‘Sherlock’ Cumberbatch stole the show with his oh-so-adorable jumpy photobomb move. Michael Keaton was taking a snap of Meryl Streep and Margaret Cho when our very own Holmes jumped into the frame for the ‘jumpy’ joys of jumping. Just saying!! 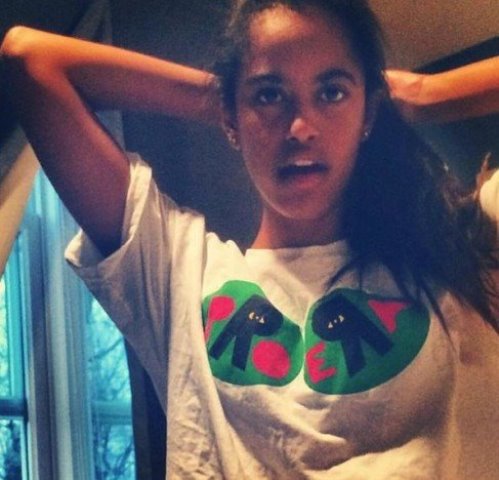 Since interest in the First sisters is in no way a new thing, the Internet immediately broke into a frenzy when an unauthorized picture of Obama’s elder daughter, Malia, began to do the rounds. The picture was first posted on Instagram on 5th January, with the caption “Malia Obama rocking that classic Pro-Era tee!” The White House officials refused to comment on the matter. They have been very careful about the public appearances of Malia and her younger sister, the 14-year-old Sasha, ensuring that no shutterbugs capture them when the President or the First lady isn’t accompanying them. Although it isn’t clear how and when the picture was taken, it is certain that the viral effect has certainly revved up the popularity of the Brooklyn rap group. After all, the White House has a fan!!

Suggested read: Kim K spends a ridiculous amount of money on her selfies!

I’d be surprised if Kim Kardashian wasn’t on this list. After her unsuccessful attempt to break the Internet with her nude photoshoot for Paper magazine in November 2014 (as if we hadn’t seen enough of it already), seemed like she enlisted the help of hubby dearest for achieving the goal. Arguably, the most famous couple on the web, Kanye West and Kim Kardashian have teamed up for a brilliant stroke. Since Kim has never been shy and Kanye is as supportive as one can be, Kanye has posted a series of nude pictures of wifey on Twitter. The pictures are from the same shoot that aired on the season premiere of ‘Keeping Up With The Kardashians’ a couple of days ago. Also, Kanye says he is oh ‘SO LUCKY.’ Also, did we tell you – the couple is doing it like rabbits. I mean, 15 times a day, all because they want to give North West a sibling?!? Well, good luck getting preggers, Kim!

6. Lady Gaga takes it up another notch 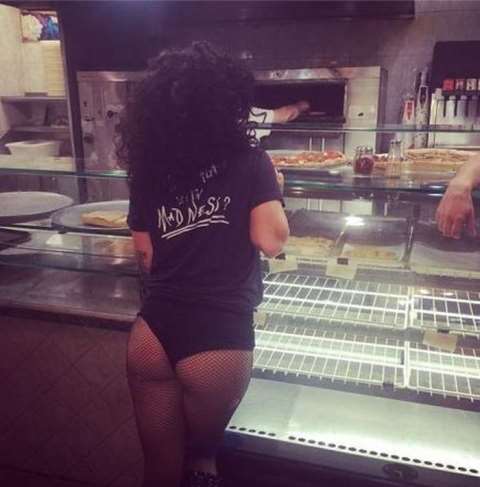 Image source There is no need to stress upon how oddly unsettling it can get when it is this generation’s Madonna we’re talking of. After her much-hyped engagement to boyfriend Taylor Kinney, it is this weird photograph of Lady Gaga’s derriere that seems to have blown minds and browsers. 7. Adam Levine strutting his stuff 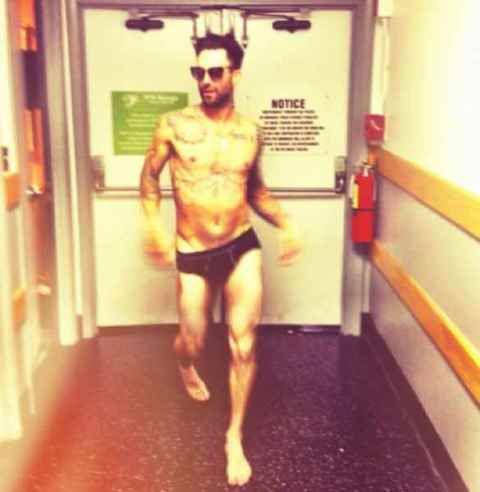 Image source Here’s where we dive headlong into more weird territory. The Maroon 5 singer just plays with the promise of baring it all. Although, it is his girlfriend who is capturing the picture. So ladies, hard luck. 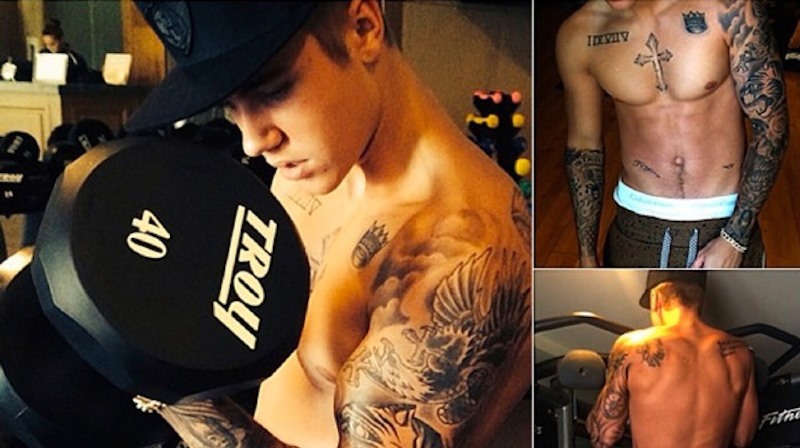 Image source: Youtube I know, I know. But one of us had to mention him and it had to be me <don’t know what expression to give> 😛 Love him or hate him, the guy is here to stay. Especially, if he has managed to put up those shirtless pictures of him pumping iron in the gym! Did it just blow it up??? 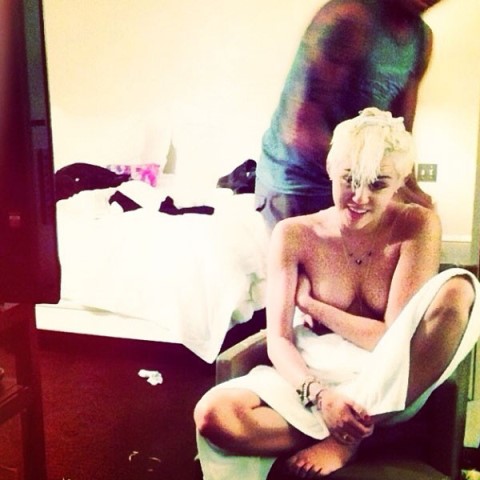 Image source: Google, copyright-free image under Creative Commons License After the great celebrity photo leak last year, it seems like nude and semi-nude photos on the web have become a hot favorite with celebs. They have turned the odds in their favor and these pictures are their new winning formula. Watch Miley Cyrus use it here – with amazing dexterity and ohh-that-winning Instagram filter. 10. And of course, Ellen DeGeneres nabs it all

We had to end the list with a bang. Only this is like the big bang. Does this picture even need an introduction?? Ellen DeGeneres took it all away when she rolled out this most retweeted tweet of the year with the quip that is so her: “If only Bradley’s arm was longer. Best photo ever. #oscars” With 3.3 million retweets and 2 million favorites and circulation in over 151 countries, this is one of the most cheerful selfies ever. Plus, I know why I have reason to cheer. It has Bradley Cooper front and center! Okay, it also has other Hollywood A-listers – Meryl Streep, DeGeneres herself, Brad Pitt, Kevin Spacey, Julia Roberts, Angelina Jolie, and Lupita N’yongo. What else do you need to break the Internet, huh?

Had fun much? We will be back soon with more!! J