Someone Who Dared To Disturb The Universe: Best Poems by T.S. Eliot

When T. S. Eliot died, wrote Robert Giroux, “the world became a lesser place.” Certainly the most imposing poet of his time, Eliot was revered by Igor Stravinsky “not only as a great sorcerer of words but as the very key keeper of the language.” For Alfred Kazin he was “the mana known as ‘T. S. Eliot,’ the model poet of our time, the most cited poet and incarnation of literary correctness in the English-speaking world.” Northrop Frye simply states: “A thorough knowledge of Eliot is compulsory for anyone interested in contemporary literature. Whether he is liked or disliked is of no importance, but he must be read.”

In 1945 Eliot wrote: “A poet must take as his material his own language as it is actually spoken around him.” Correlatively, the duty of the poet, as Eliot emphasized in a 1943 lecture, “is only indirectly to the people: his direct duty is to his language, first to preserve, and second to extend and improve.” Thus he dismisses the so-called “social function” of poetry. The only “method,” Eliot once wrote, is “to be very intelligent.” As a result, his poetry “has all the advantages of a highly critical habit of mind,” writes A. Alvarez; “there is a coolness in the midst of involvement; he uses texts exactly for his own purpose; he is not carried away. Hence the completeness and inviolability of the poems. What he does in them can be taken no further…. [One gets] the impression that anything he turned his attention to he would perform with equal distinction.” Alvarez believes that “the strength of Eliot’s intelligence lies in its training; it is the product of a perfectly orthodox academic education.” But Jacques Maritain once told Marshall McLuhan that “Eliot knows so much philosophy and theology that I do not see how he can write poetry at all.” Eliot, however, never recognized a conflict between academic and creative pursuits.

Suggested read: Don’t Tell Me You Love Me; Show Me You Do!

Someone Who Dared To Disturb The Universe: Best Poems by T.S. Eliot

Here are some of the best poems by T.S. Eliot.

And lived in a small house near a fashionable square

Cared for by servants to the number of four.

Now when she died there was silence in heaven

And silence at her end of the street.

The shutters were drawn and the undertaker wiped his feet —

He was aware that this sort of thing had occurred before.

The dogs were handsomely provided for,

But shortly afterwards the parrot died too.

The Dresden clock continued ticking on the mantelpiece,

And the footman sat upon the dining-table

Holding the second housemaid on his knees —

Who had always been so careful while her mistress lived.

The readers of the Boston Evening Transcript

Sway in the wind like a field of ripe corn.

When evening quickens faintly in the street,

Wakening the appetites of life in some

And to others bringing the Boston Evening Transcript,

I mount the steps and ring the bell, turning

Wearily, as one would turn to nod good-bye to Rochefoucauld,

And I say, “Cousin Harriet, here is the Boston Evening Transcript.“

Suggested read: “I Passed Into The Dusk”: Some Of The Best Works By Ivor Gurney

Strode across the hills and broke them,

Rode across the hills and broke them —

And danced all the modern dances;

And her aunts were not quite sure how they felt about it,

But they knew that it was modern.

Upon the glazen shelves kept watch

Matthew and Waldo, guardians of the faith,

The army of unalterable law.

Thou hast nor youth nor age
But as it were an after dinner sleep
Dreaming of both.

Here I am, an old man in a dry month,

Being read to by a boy, waiting for rain.

I was neither at the hot gates

Nor fought in the warm rain

Nor knee deep in the salt marsh, heaving a cutlass,

My house is a decayed house,

And the Jew squats on the window sill, the owner,

Spawned in some estaminet of Antwerp,

Blistered in Brussels, patched and peeled in London.

The goat coughs at night in the field overhead;

A dull head among windy spaces.

Signs are taken for wonders.  ‘We would see a sign!’

The word within a word, unable to speak a word,

Swaddled with darkness.  In the juvescence of the year

In depraved May, dogwood and chestnut, flowering judas,

To be eaten, to be divided, to be drunk

Among whispers; by Mr. Silvero

With caressing hands, at Limoges

Who walked all night in the next room;

By Hakagawa, bowing among the Titians;

By Madame de Tornquist, in the dark room

Who turned in the hall, one hand on the door.

Weave the wind.  I have no ghosts,

An old man in a draughty house

Under a windy knob.

After such knowledge, what forgiveness? Think now

And issues, deceives with whispering ambitions,

Guides us by vanities.  Think now

She gives when our attention is distracted

And what she gives, gives with such supple confusions

That the giving famishes the craving.  Gives too late

What’s not believed in, or is still believed,

In memory only, reconsidered passion.  Gives too soon

Into weak hands, what’s thought can be dispensed with

Till the refusal propagates a fear.  Think

Neither fear nor courage saves us.  Unnatural vices

Are fathered by our heroism.  Virtues

Are forced upon us by our impudent crimes.

These tears are shaken from the wrath-bearing tree.

The tiger springs in the new year.  Us he devours.  Think at last

We have not reached conclusion, when I

Stiffen in a rented house.  Think at last

I have not made this show purposelessly

And it is not by any concitation

Of the backward devils.

I would meet you upon this honestly.

I that was near your heart was removed therefrom

To lose beauty in terror, terror in inquisition.

I have lost my passion: why should I need to keep it

Since what is kept must be adulterated?

I have lost my sight, smell, hearing, taste and touch:

How should I use it for your closer contact?

These with a thousand small deliberations

Protract the profit of their chilled delirium,

Excite the membrane, when the sense has cooled,

In a wilderness of mirrors.  What will the spider do

Suspend its operations, will the weevil

Beyond the circuit of the shuddering Bear

In fractured atoms. Gull against the wind, in the windy straits

Of Belle Isle, or running on the Horn,

White feathers in the snow, the Gulf claims,

And an old man driven by the Trades

To a sleepy corner.

Tenants of the house,

Thoughts of a dry brain in a dry season.

This is all we have on today’s post on the Best Poems By T.S. Eliot. This is, however, not an exhaustive list, and if we have missed out on some of your favorites, then please feel free to add them in the comment section below. 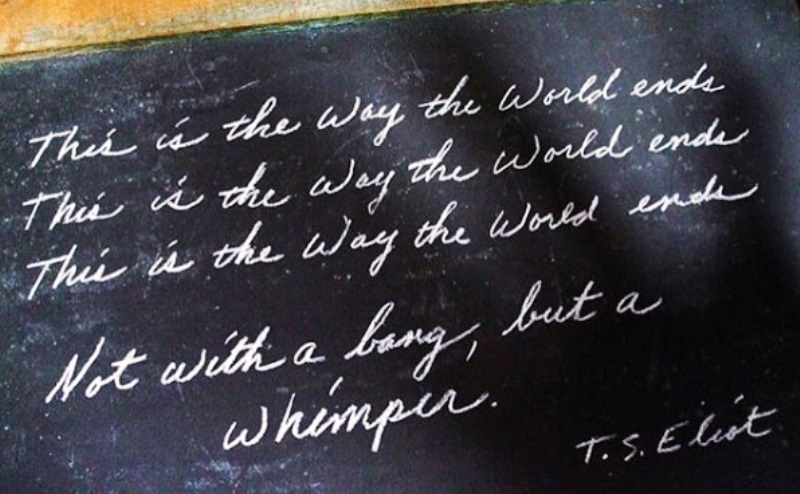