Swedish artist Nina Linde believes ‘everyone needs sexual stimulation.’ And therefore, the 33-year-old has created a book to give the blind a chance to experience p*rn.

The book aptly titled Occasionally Blind is, in Linde’s own words, ‘a story about a couple trying out different sex positions.’ The book contains tactile illustrations of heterosexual, gay, and lesbian couples engaging in diverse sexual acts. Each tactile picture is captioned with a Braille explanation of what the couple is doing and how. These descriptions include pointers on the most basic sexual acts to tips for performing group sex as well as using strap-ons!

When asked about the original conception of the book, Linde averred that a visit to the Braille Library in Stockholm and a consequent discovery of no existent pornographic literature for the visually impaired exhorted her to take matters into her own hands and create something of titillating value for the blind, who do not, by virtue of their blindness, confiscate their right to the realms of pleasure. She published Occasionally Blind in 2010 but the book has recently taken the world by storm after a copy has been made available at the National Library of Sweden. 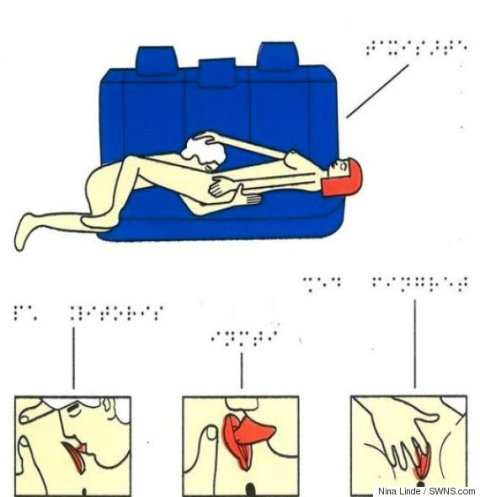 The president of Sweden’s National Federation of the Visually Impaired, Håkan Thomsson, said that the books were a positive step for blind people.

“I think that some imagine that we have no sexuality, which is not true,” he said. “Visually impaired people are just as sexual as any other.”

Richard Lane from Disability Charity Scope concurs. He says, “too often people assume that disabled people don’t have fun, fulfilling sex lives and relationships. Many of us enjoy looking at a few tantalizing pictures and it’s great to see this artist enabling visually impaired people to get in on the fun.”

And we couldn’t agree more. A disability does not and should not rule out normalcy in life.

Nina Linde’s bold and welcome step to challenge conventional and ill-founded assumptions about the visually impaired and their sexuality is a step in the right direction! Let us all join in and forge ahead!