Dating For Dummies: The Complete Guide On How To Talk To A Girl You Like

There has been a point in all our lives where we want to go up to a person and strike up a conversation. However, not all of us can smartly walk up to them and be all smooth and suave. They make it look really easy in the movies but for some of us, it’s more daunting than rocket science. Especially, if this person happens to be an attractive girl and you happen to be a social retard.

How then, do you come across as approachable, fun, intriguing, and impressive at the same time?

Imagine yourself at a place – a park, a bar, a cafe or a bookstore – of your preference. You see a girl who is attractive, perhaps your type, if you happen to have a type. She’s with a friend or two (it would be easy if she had been alone). You see that she is too animated or preoccupied or engrossed with the conversation she’s having. In any case, she isn’t paying you any attention. Perfect. Then you can plan your move.

What would you say if you went up to her? Hi? No, that’s way too common. Everyone says that. How would you begin? With a joke? What is her kind of humor? Nah, a joke could be too risky. Something safe that isn’t hi. What about one of those cheesy conversation openers? One that you read over the internet or saw your friend use it?

“Are you a pulmonary embolism? Because you make me breathless.” No, that might make her throw up.

What about, “I would offer you a cigarette but you’re already smoking hot”? No, that will definitely make her throw up. It would make you throw up too.

What could you possibly say that wouldn’t make you look like a creep and at the same time interest her? This is too much of a pain. Maybe you should just head back home, watch television, and binge on that jar of Nutella in your fridge. That’s what your life is going to be like, anyway. A non-event that will lead to an equally boring death where you will probably just choke on the snacks that you were stuffing yourself with, alone. Death is inevitable and everything gets over, anyway; so what’s the point?

That was your incorrigible mind talking to you. Take a deep breath, calm your mind, and think about the worst possible thing that could happen if she doesn’t like what you say. She’ll just walk away. Will it feel horrible? Yes. Will you survive it? Possibly. Will it be the absolute and utter end of your social and romantic life?
The answer is no for sure.

The first step to how to talk to a girl is to not over think it. The more you over think it, the worse it will get in your head. When you’re not the most confident, suave individual, it’s important to get over your initial inhibitions. Moreover, it’s not really that important to stand out. A simple ‘Hi’ works well too. In the attempt to shine, you will probably embarrass yourself enough to climb back into your hole for the rest of the year.

2. Stay away from cheesy pickup lines. 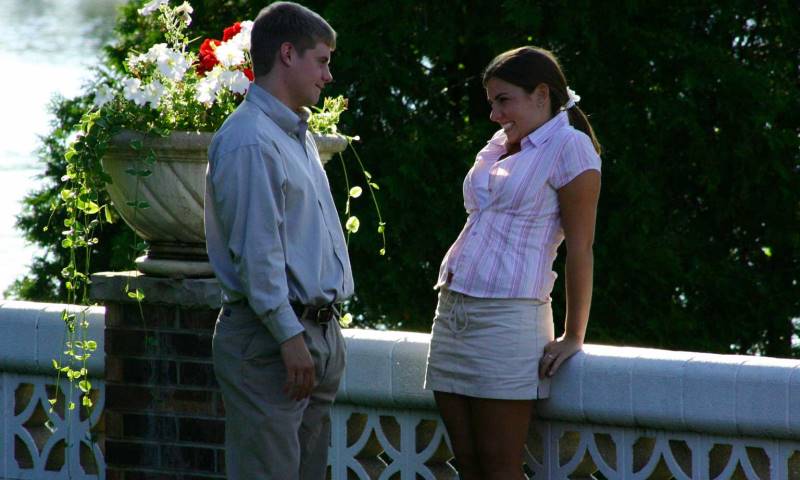 Some guys can carry them off because of luck, charm, looks, whatever you want to call it. Considering that you are an amateur at this game, don’t go down that perilous path. The key is to be yourself but not that much of yourself that you talk yourself into not going up to her. Just talk the way you do normally, and she might find your awkwardness funny, even endearing.

3. Don’t feign your way into the conversation.

How to talk to a girl is a frequently asked question, and this is the most essential of things to remember. Honesty is appreciated by women and men alike. It’s an appealing trait. Avoid farces of any kind – preferences, interests or accents. If she sees through the act you put on, it will be even more ridiculous.

Keeping the above points in mind, you can greet the woman in question and introduce yourself in the most normal way possible. Don’t even think about rapping or singing (some people have been known to do that), don’t appear too excited, and keep your voice as pleasant as you can. And even if your voice cracks or something, just shrug it off and carry on.

Now that you have gotten the ball rolling and the conversation started, make sure you pay attention to everything she says, most things she looks at, and do watch her eyes. That way you get a vague idea about the things she likes or dislikes and so, more topics to talk about. However, don’t watch too closely or intensely. The last thing you need is her creep alert going off.

This is actually a tricky one because the woman may be a little shy initially or not that much of a talker. Then again, everyone likes to be heard and a good listener is one who everyone appreciates. The better you listen, the more you know about the person and that will help you make any decisions in future.

7. Try to present your opinions in the most interesting way possible.

In case you agree or disagree with her views, keep them as intriguing as possible. Don’t give away too much information right away. If you want to keep her interested and coming back for more, it is important that you know how much to disclose and when.

You need to exude confidence. Humble and spineless are two completely different things. Self-possessed people are very alluring. When you avoid eye contact, it seems like you have something to hide. Body language is a major part of dating. You want to seem relaxed but interested, welcome but not desperate.

A lot of people would say be a ‘gentleman.’ That is not necessarily helpful. Being overly nice to someone just because they’re someone you are attracted to is rather inane. Just treat her nicely without altering your personality; however, don’t be rude. Originality is attractive. Pay her authentic compliments in the adequate amount that does not sound like flattery but genuine admiration. Also, don’t forget your sense of humor. Even if it’s minimal. Even if it’s twisted. Everyone likes to laugh. It doesn’t have to be a joke, it could be a witty remark or a comical observation. Just try to have fun.

Suggested read: 10 effective tips on how to get your girlfriend to kiss you

There’s a Chinese saying that I learnt from The Karate Kid (the one in which Jackie Chan has starred). It goes something like this, “Wu ji bi fan,” roughly meaning too much of anything can be a bad thing. To keep her interested, you need to know when to terminate the encounter. Ask her out another time or get a way to contact her. Also, if she tells you that she is too busy or something that suspiciously sounds like an excuse, take the hint and back off.

It’s far easier to make a list of what to do, but to be honest, socializing is difficult. Even after preparing yourself on how to talk to a girl, it may be plausible that you don’t click because human beings don’t come with manuals. So don’t be discouraged if it doesn’t work out. Practice makes perfect. The fear of rejection should not inhibit you. The point of this is to have fun. So, don’t try too hard or feel disappointed. It might take some time to get your game on point.

Dating is a complex puzzle. You may have to experience a lot before you finally meet a puzzle piece with the weird edges that fit into yours and a level of anomaly to match yours. In the end, it will all be worth it.

Article Name
The Complete Guide On How To Talk To A Girl You Like
Author
Diksha Chakraborty
Description
You see a girl across the crowded bar, but don't know how to talk to a girl and make a good impression? Here's everything you need to know about it.