“You Didn’t Show Up, I Keep Waiting”: Richard Siken Poems To Heal Your Heart

Richard Siken is an American poet who also paints and makes movies. His collection of poems, Crush, won the Yale Series of Younger Poets Competition in 2004. ‘War of the Foxes’, his second poem collection was released from Copper Canyon Press in 2015.

Here are some of my favorite Richard Siken poems.

Tell me about the dream where we pull the bodies out of the lake
and dress them in warm clothes again.
How it was late, and no one could sleep, the horses running
until they forget that they are horses.
It’s not like a tree where the roots have to end somewhere,
it’s more like a song on a policeman’s radio,
how we rolled up the carpet so we could dance, and the days
were bright red, and every time we kissed there was another apple
to slice into pieces.
Look at the light through the windowpane. That means it’s noon, that means
we’re inconsolable.
Tell me how all this, and love too, will ruin us.
These, our bodies, possessed by light.
Tell me we’ll never get used to it.

There are so many things I’m not allowed to tell you.
I touch myself, I dream.
Wearing your clothes or standing in the shower for over an hour, pretending
that this skin is your skin, these hands your hands,
these shins, these soapy flanks.
The musicians start the overture while I hide behind the microphone,
trying to match the dubbing
to the big lips shining down from the screen.
We’re filming the movie called Planet of Love-
there’s sex of course, and ballroom dancing,
fancy clothes and waterlilies in the pond, and half the night you’re
a dependable chap, mounting the stairs in lamplight to the bath, but then
the too white teeth all night,
all over the American sky, too much to bear, this constant fingering,
your hands a river gesture, the birds in flight, the birds still singing
outside the greasy window, in the trees.
There’s a part in the movie
where you can see right through the acting,
where you can tell that I’m about to burst into tears,
right before I burst into tears
and flee to the slimy moonlit riverbed
canopied with devastated clouds.
We’re shouting the scene where
I swallow your heart and you make me
spit it up again. I swallow your heart and it crawls
right out of my mouth.
You swallow my heart and flee, but I want it back now, baby. I want it back.
Lying on the sofa with my eyes closed, I didn’t want to see it this way,
everything eating everything in the end.
We know how the light works,
we know where the sound is coming from.
Verse. Chorus. Verse.
I’m sorry. We know how it works. The world is no longer mysterious.

A man walks into a bar and says:
Take my wife–please.
So you do.
You take her out into the rain and you fall in love with her
and she leaves you and you’re desolate.
You’re on your back in your undershirt, a broken man
on an ugly bedspread, staring at the water stains
on the ceiling.
And you can hear the man in the apartment above you
taking off his shoes.
You hear the first boot hit the floor and you’re looking up,
you’re waiting
because you thought it would follow, you thought there would be
some logic, perhaps, something to pull it all together
but here we are in the weeds again,
here we are
in the bowels of the thing: your world doesn’t make sense.
And then the second boot falls.
And then a third, a fourth, a fifth.

A man walks into a bar and says:
Take my wife–please.
But you take him instead.
You take him home, and you make him a cheese sandwich,
and you try to get his shoes off, but he kicks you
and he keeps kicking you.
You swallow a bottle of sleeping pills but they don’t work.
Boots continue to fall to the floor
in the apartment above you.
You go to work the next day pretending nothing happened.
Your co-workers ask
if everything’s okay and you tell them
you’re just tired.
And you’re trying to smile. And they’re trying to smile.

All the cows were falling out of the sky and landing in the mud.
You were drinking sangria and I was throwing oranges at you,
but it didn’t matter.
I said my arms are very long and your head’s on fire.
I said kiss me here and here and here
And you did.
Then you wanted pasta,
so we trampled out into the tomatoes and rolled around to make the sauce.
You were very beautiful.
We were in the Safeway parking lot. I couldn’t find my cigarettes.
You said Hurry up! but I was worried there would be a holdup
And we would be stuck in a hostage situation, hiding behind
the frozen meats, with nothing to smoke for hours.
You said Don’t be silly,
so I followed you into the store.
We were thumping the melons when I heard somebody say Nobody move!
I leaned over and whispered in your ear I told you so.
There was a show on the television about buried treasure.
You were trying to convince me that we should buy shovels
and go out into the yard
and I was trying to convince you that I was a vampire.
On the way to the hardware store I kept biting your arm
and you said if I really was a vampire I would be biting your neck,
so I started biting your neck
and you said Cut it out!
and you bought me an ice cream, and then we saw the UFO.
These are the dreams we should be having. I shouldn’t have to
clean them up like this.
You were lying in the middle of the empty highway.
The sky was red and the sand was red and you were wearing a brown coat.
There were flecks of foam in the corners of your mouth.
The birds were watching you.
Your eyes were closed and you were listening to the road and I could
hear your breathing, I could hear your heart beating.
I carried you to the car and drove you home but you
weren’t making any sense

I took a shower and tried to catch my breath.
You were lying on top of the bedspread
in boxer shorts, watching cartoons and laughing but not making any sound.
Your skin looked blue in the television light.
Your teeth looked yellow.
Still wet, I lay down next to you. Your arms, your legs, your naked chest,
your ribs delineated like a junkyard dogs.
There’s nowhere to go, I thought. There’s nowhere to go.
You were sitting in a bathtub at the hospital and you were crying.
You said it hurt.
I mean the buildings that were not the hospital.
I shouldn’t have mentioned the hospital.
I don’t think I can take this much longer.
In the dream I don’t tell anyone, you put your head in my lap.
Let’s say you’re driving down the road with your eyes closed
but my eyes are also closed.
You’re by the side of the road.
You’re by the side of the road and you’re doing all the talking
while I stare at my shoes.
They’re nice shoes, brown and comfortable, and I like your voice.
In the dream I don’t tell anyone, I’m afraid to wake you up.
In these dreams it’s always you:
The boy in the sweatshirt,
The boy on the bridge, the boy who always keeps me
from jumping off the bridge.
Oh, the things we invent when we are scared
and want to be rescued.
Your jeep. Your teeth. The coffee that you bought me.
The sandwich cut in half on the plate.
I woke up and ate ice cream in the dark,
hunched over on the wooden chair in the kitchen,
listening to the rain.
I borrowed your shoes and didn’t put them away.
You were crying and eating rice.
The surface of the water was still and bright.
Your feet were burning so I put my hands on them, but my hands
were burning too.
You had a bottle of pills but I wouldn’t let you swallow them.
You said Will you love me even more when Im dead?
And I said No, and I threw the pills on the sand.
Look at them, you said. They look like emeralds.
I put you in a cage with the ocelots. I was trying to fatten you up
with sausages and bacon.

Somehow you escaped and climbed up the branches of a pear tree.
I chopped it down but there was nobody in it.
I went to the riverbed to wait for you to show up.
You didn’t show up.
I kept waiting.

Suggested read: Vocabulary And Other Brilliant Poems By Jason Schneiderman

This is all we have on today’s post on the some of the best Richard Siken poems. This is, however, not an exhaustive list, and if we have missed out on some of your favorites, then please feel free to add them in the comment section below. 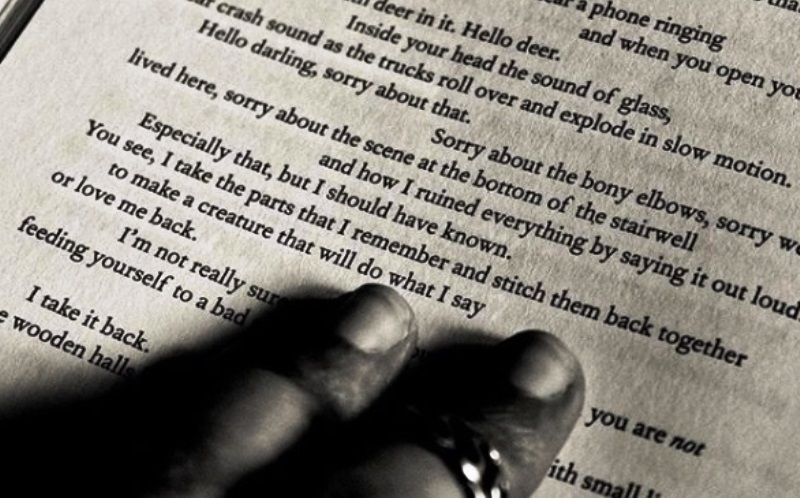 Article Name
"You Didn't Show Up, I Keep Waiting": Richard Siken Poems To Heal Your Heart
Author
Riya Roy
Description
Richard Siken is an American poet who also paints and makes movies. Here are some of the best Richard Siken poems for you to read and love.