Since the beginning of time, we have been living in a male-dominated society. In some cultures, mythology says that Eve was made from Adam’s ribs. Fortunately, we have come a long way from there, and society has been slowly progressing from the prehistoric concept of females being inferior to males. Certain preconceived notions have become a part of our lives – women are meant to be docile, men are not supposed to care about how they look: there is no brief way to describe how fundamentally incorrect the social evil called male chauvinism really is. It is vital that we speak up against not only blasphemous acts like female infanticide and deprivation of basic human rights to women, but also refuse to accept those little, irksome things that happen every day.

A misogynist is a word used to describe those who hate or don’t trust women. It is absurd to hate any kind of people because the world is incomplete without the female species just like their male counterparts. It’s devastating to find out that the person you’re dating, while otherwise pleasant, is a closeted misogynist.

Here’s a list of 10 clear signs that you are dating a misogynist (so sorry for you):

1. Whenever you’re in a bad mood, he assumes you’re menstruating.

People do have bad days and get cranky. Just because we’re women, doesn’t mean the only problems we face are either period or pregnancy. It is true, having our period is often annoying to deal with, but not all our problems are linked to our ovaries and our high tolerance for pain. If this guy you’re dating thinks the only problem big enough to put you in a foul mood is the monthly flow of blood along the lining of your uterus coupled with cramps and headaches, then you’ve got yourself a problem: a misogynistic one.

If he seriously meant this when he told you this, you shouldn’t be going out with someone that condescending in the first place. Second of all, smartness or intellect is not limited to any sex, creed, religion, race or color. Let him know that before you dump him.

3. He gets defensive when you want to pay your half.

Assuming that you can pay your half of the bill, and he can pay his, why won’t you? Or he could pay some bills and you can pay some. If he’s so loaded, tell him to donate to good causes, impose his dominance at his work place, and not flash his authority to you.

These men are omnipresent. They’re there on the streets, in your college, at your workplace, everywhere. To constrict a person’s identity to the shape and size of their organs is just sad.  We all watch movies and music videos, and see pictures of celebrities showing off their bodies and that is not wrong—because they are all consenting adults who choose to do that and no one has the right to question them as long as they earn an honest living. What is appalling is to refer to women with profane and ridiculous words. The truth is, we’re all worth so much more than our waistlines and body parts.

While everyone appreciates courtesy and niceness, to undermine a woman’s power because of her ‘poorer upper-body strength’ is most ignorant and obnoxious. In today’s day and age, a woman, when given the opportunity, can do as much and more than a man can – and her ‘fragile constitution’ doesn’t get in the way. So many stereotypes are yet to be overcome.

6. He regards feminism as a joke.

We hear a lot of guys say things like: “you’re not one those feminist types, are you?”

The word has been misused and misinterpreted so many times. Feminism does not refer to superiority of women or hating men; it defines the belief that women and men are equal and have equal rights in any given situation. No, I’m not one of those feminist types, I am a feminist and you should be one too. Dating a misogynist goes against that idea.

7. He is against the idea of a woman being ‘allowed’ to have an abortion.

The decision of having an abortion is one only the woman in question is allowed to make. Whether she wishes to be a mother or not is up to her. Anyone who questions that is not only violating her privacy, but also reflecting a doubtful personality. If your date has expressed similar opinions, it is time to wonder whether he respects you as a person.

8. He actually uses demeaning words like ‘whore,’ ‘slut,’ or ‘skank’ to describe women.

A woman who is sexually active does not prostitute herself; she chooses to enjoy carnal pleasures to which she is entitled as a consenting adult. Her sex life has nothing to do with marriage. No one else’s opinion on how frequently she chooses to have sex and with whom matters. If your boyfriend says lowly things like that, beware of him after you break up.

9. He opines that women should look pretty for other people.

Looking good and being in good shape is great for one’s physical and mental health. Of course, your self-esteem does not depend on your appearance, but there is no doubt that it makes you feel nice when you look decent. The idea that women put on makeup and wear clothes that complement their figures so as to impress other people is utter nonsense. We often put on makeup to reveal our artistic selves and also because it can be fun. As women, we are not bothered one tiny bit whether you men approve of our makeup or clothes.

10. He expects you to respect him because he is a ‘male’.

As preposterous as it sounds, many of us have encountered this creature in our lives. He makes you wonder if he is from the same species as you are. Everyone deserves to be respected and treated right, no matter their gender, race, or sexual orientation. A man who expects respect only because his genitals are different from yours is a man who needs extensive help and he is beyond therapy.

Jokes aside, female oppression is a serious issue that has to be eradicated from our society. Every time a man that takes a dig at your prestige to establish that you are beneath him in any respect, it is your duty to show him his place. If you happen to be dating one of these people, God bless your soul; don’t continue any kind of association with him. Dating a misogynist is not only encouraging the likes of him but also detrimental to your own mental well-being. As a person who champions the idea of people of all kinds being treated equally, misogyny is to be spoken and taught against. 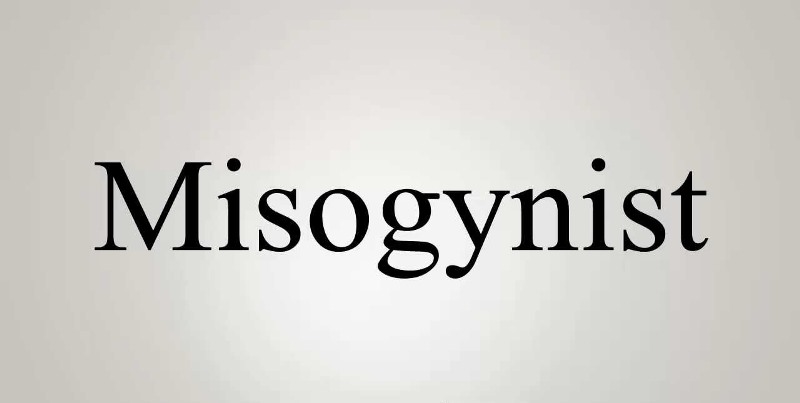 Article Name
10 Sure Signs You're Dating A Misogynist
Author
Diksha Chakraborty
Description
Beware of these signs that show if you're dating a misogynist. If so, then RUN, as far away from him as possible.