14 Definite Signs Your Guy Friend Wants To Be Your Boyfriend

You have a close guy friend, who has been through so much with you. You rely on him too much, and you can’t imagine what your life would be like without him by your side. He’s there when you need him the most, no matter the time or day. He values what you two have, and isn’t afraid to show how much your friendship means to him, from time to time.

However, lately, he has been… kinda weird. Weird, as in, he has been giving you mixed signals, and is blowing hot and cold. He says he’s happy for you when you go out on a date with a nice guy, but then, he doesn’t want to hear anything about how the date actually went. He says he cares about you one minute, and the next, he storms off when you say how much you value his friendship. What’s going on then?

You scratch your head thinking up awful scenarios, going over the past few days and weeks, trying to figure out what happened and why everything seems off-kilter, with no apparent reason. No matter how hard you try, you can’t seem to pin down the reason for his odd behavior. So what is the reason he’s acting so out of character with you?

Suggested read: The complete guide on how to tell your parents you have a boyfriend

He may have developed feelings for you!

Yep, that’s right. He may have more than friendly feelings towards you, but he doesn’t know how to let you know. If you want to figure out if this is the case, keep your eyes peeled for these signs he wants to be your boyfriend!

1. He never admits to any crushes he has

Despite the fact that you have spoken to him about any and probably all of your crushes, he hasn’t said a peep about his own crushes. You prod him, annoy him, cajole him – but nothing works and he never admits to any crushes. More than likely, he’s trying to give you a hint.

2. He texts you quite regularly

He sends you good morning texts, replies to your texts almost immediately, and he has a tendency to panic if he doesn’t hear from you when you said you’d call or text him. This shows that he thinks about you when he wakes up, and is worried about your safety. I’m sure he won’t be doing the same with his other buddies. If you’re still skeptical, check with your other common friends. I’m sure a few of them would be frustrated that their texts went unanswered for days on end!

3. He remembers the little things

Most men often can’t remember what they ate for breakfast that morning, let alone what significant occurred a week or a fortnight ago. But when it comes to you, he remembers even the littlest details. How you like your first dose of coffee, how much sugar you want in your latte, the way you always carry your phone in your left pocket, how you don’t like to talk about your cousin who accused you of cheating on a test, your absolute favorite flavor of ice cream, how you like regular water instead of sparkling water. Trust me, he’ll know every teeny tiny detail when it comes to you. All this attention to detail is his way of showing you how much you mean to him, and how important you are to him.

4. He always has time for you

However close you might be with your friends, they’re not available every time you have a crisis. That’s just reality. But if this guy friend of yours is there for you, no matter day or night, returns your calls and texts when he says he will, and lends an ear when you need to vent, then he sure is making every effort known to him that he wants more than friendship with you. You have got to be blind if you don’t see such sweet gestures, unless of course, you have noticed them and are not interested in him that way.

5. He seems protective of you

You’re stranded at a club when your best friend ditched you to go bar crawling with a new guy she met? Don’t worry, your guy friend will be there in a jiffy to make sure you reach home safe. You need a ride for work because your car broke down at the side of the road? He’ll be there to pick you up and drop you off at work. No biggie, because he can go to any length to keep you safe. Whatever you need, he’s just a phone call away, he might even be able to beat Superman, for all you know! 😉

6. He shows how he feels through his body language

He knows just how to get close to you, without making you feel uncomfortable. His body language says it all. When you’re out in a crowded bar, he slides a bit closer to you, so that you’re not jostled by others, he pulls you into him so that you don’t get elbowed on the dance floor, and he puts a little more into his hugs and cheek-kisses than what a friend gives. These should be enough for you to figure out that he wants more from you, more than friendship.

Suggested read: 16 amazingly fun games you can play with your boyfriend

7. He slips in compliments in your conversations – smooth as butter

You changed your hair? He noticed that and told you how the new hairstyle suits you. You wore a different shade of blue shirt that makes your eyes pop? He sure does noticed it and let you know how bright you looked. No matter how small the change you made to your appearance, he notices them all and compliments you on them, like it’s no big deal. But, it is a big deal, because rarely do people pay that much attention to detail. That’s a point for him!

8. He is comfortable with your friends

He doesn’t mind hanging out with your girls. In fact, he enjoys the easy banter you girls share, and more often than not, he suggests that all of you hang out together. He knows how much you value your girlfriends and their opinions, so he knows not to antagonize them or upset you in any way by picking a fight with one of your besties.

9. He does things he wouldn’t normally do 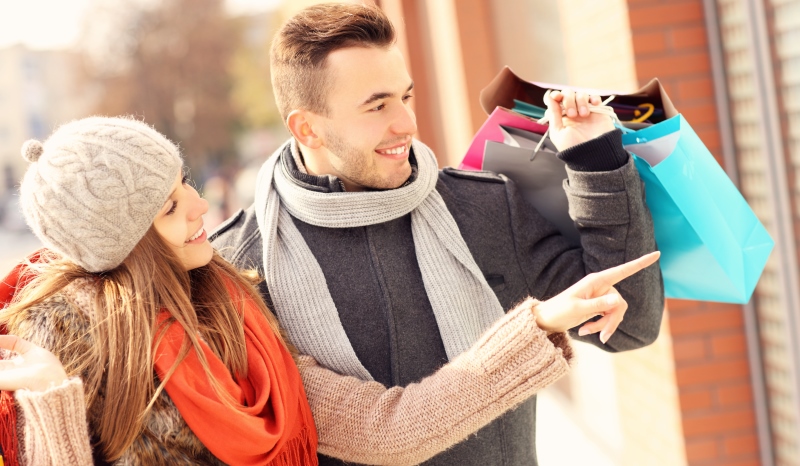 Like go shopping with you, or take you on a museum tour, even though he hates museums. Or take you up on your offer to go on a guided tour of your city’s historic gallery, even though artsy stuff bores him to death. Or watch that dark TV show How To Get Away With Murder, even though he’s not a fan of dark, complex thrillers. Why? Because he cares about you and your passions and interests. He wants to show you, subtly, that he would do things even though he doesn’t like them, just because he wants to see you happy.

10. He tells you how much fun he has with you

No matter what you’ve been doing with him – touring your city’s art galleries, or watching documentaries, or shopping – he tells you how much fun he has with you. Having fun is part of being your friend. But if he says this even after doing boring things with you, then he’s definitely giving you signs he wants to be your boyfriend and do them quite regularly.

He can listen to you talk for hours on end. Whether you’re ranting on the injustice your boss did you, or the fact that your favorite author is taking too darn long to bring out their next book, he’ll listen to every little thing you have to say, without complaining or judging. He’ll be the perfect listener, who listens to even the things you don’t say. And if you talk about your dreams and ambitions, then he’ll take that as a sign of trust from you.

12. He shares his feelings

On the flip side of being a good listener, he also shares and confides things with you, that he hasn’t shared with anyone else. And if he has shared his dreams and aspirations about the future, then he most probably trusts you more than he can express in mere words. That means he holds you in a special place in his life.

So your ex has been texting you, or that cute guy from office wants to take you out for dinner. But when you share this info with your guy friend, he’ll most definitely act all weird, may be even get angry at you (for no apparent reason), or change the topic, or walk away from there. You’ll be left staring after him open-mouthed, wondering what the bleep happened. This is when he lets you know that he cares for you too much, and the thought you with another guy just about tears him up. Take the hint, lady.

Suggested read: 10 absolutely perfect things to talk about with your partner

14. He asks a lot of questions

You both have been friends for a long time, but only recently has he come to ask you a lot of questions – personal, professions, emotional, hypothetical, imaginary, fantasy ones, and everything in between. This is his way of trying to gauge where you are at, so that he can figure out what to do next.

So if your guy friend is acting weird lately and exhibits most or all of the signs mentioned in this list, then he sure wants to be your boyfriend. Now that you know what he has in mind, it’s up to you on what you want to do. If you think you’d like to take a chance on him and give dating him a chance, go ahead and do it. Or, if you think you’d be better off being friends and that your friendship is too valuable to you to risk it this way, then don’t lead him on. Drop enough hints that you’re just not interested in him that way, and chances are, he’ll pick them up on his own and back off. But whatever course you take, don’t, I repeat, don’t lead him on by stringing him along. And don’t give him mixed signals. That’s just cruel.