18 Things I Want To Tell The Guy Who Thinks I Am Playing Hard To Get, When I’m Plain Disinterested

It is always nice to have that cute guy across the counter eye you or have that irresistible colleague compliment you on how amazing you look. But that does NOT mean it will go any further. If the guy is sensible, he will take the cue and leave but if he isn’t (which happens like all the fu*king time), he just won’t get that you are not interested. And now, that cute guy becomes annoying AF.

We bet these are the 18 things that you want to tell the guy who thinks that your are playing hard to get, when all you are is plain disinterested –

1. I smiled and said hello when we met in a group because I that’s the polite thing to do when someone pops a ‘hi.’ That does not mean it’s okay for you to badger me the entire night.

2. You thought my Facebook status was about you? The one which said ‘If you want me, earn me!’? It was what Olivia Pope said in Scandal you doofus! You better hope I don’t get you fixed like she does.

3. ‘No, I don’t want a free drink’ said no drunk woman ever, so, of course, I accepted your drink but it does not give you a free pass to stick by my side or sidle up to me on the dance floor.

4. Fine, we went out once and had a good time. I don’t remember signing an entire lifetime to you. So, just bugger off, asking me ten times won’t change my mind.

5. You need a refresher course in communication because last I knew ‘Please don’t call or message me again’ didn’t mean ‘I am just making you work harder, please don’t stop!’

6. I wore red a couple of times this week to work, it’s not because you mentioned once that you love red and I am trying to look pretty for you. It just means I have my bloody period!

7. I am talking to other guys and going out with them because I want to. I am not doing it as a part of a grand strategy to make you jealous and work twice as hard to impress me. No, I am not interested.

8. It’s not you who I was giving a look at the smoke break; it was the hot guy you were with. Coy looks and smiles are not what I dole out freely after letting someone know I don’t give a tiny rat’s behind.

9. Blue ticks are for a reason, to let you know the reader has seen your message. And yet, you don’t get it? I usually stop responding after ‘I am not interested in speaking to you anymore.’

10. Stop pestering my friends; they are not those giggling girlfriends who help out the love sick fellow by putting in a good word to their friend. Be careful lest they make a bigger fool of you! 😉

11. Those self help lists and books which push you to ‘get the girl of your dreams’ and teach ‘how to turn a no to a yes,’ should be swapped for ‘how not to come across as a despicable me.’

12. Stalk my social media all you want but don’t expect me to ‘friend’ you or ‘follow’ you. If you want to creep on my life, do so, but I am not going to give you a free pass at it.

14. I love puzzles and mysteries, while I would fancy describing myself as a mystery to be unraveled, I am not interested in creating one for you. I am not playing games with you, never have.

15. Getting disappointed when I pick up your call and chiding me with ‘you didn’t even save my number’ is quite ridiculous, it’s time you figured out I am not interested in contacting you EVER.

Suggested read: 10 facts that women who hate flirting want you to know

16. I was drunk AF and yes, you were around to help me to my cab- that is just chivalry or common courtesy-  not a chance for you to offer me your shoulder for life.

17. Yes I am witty and sarcastic but when I tell you off nicely, it doesn’t mean I have a soft corner for you, it just means you are not worthy enough to use my grey cells for a smart comment.

18. Stop bending over backward for me. Getting me ketchup and napkins on a group lunch outing is weird as shit, and really does not make me suddenly wonder ‘Oh what a helpful guy.’ Thank you very much; I don’t need you to do stuff for me.

What are your own personal lines to ask them to f*ck off? Tell us in the comments below. 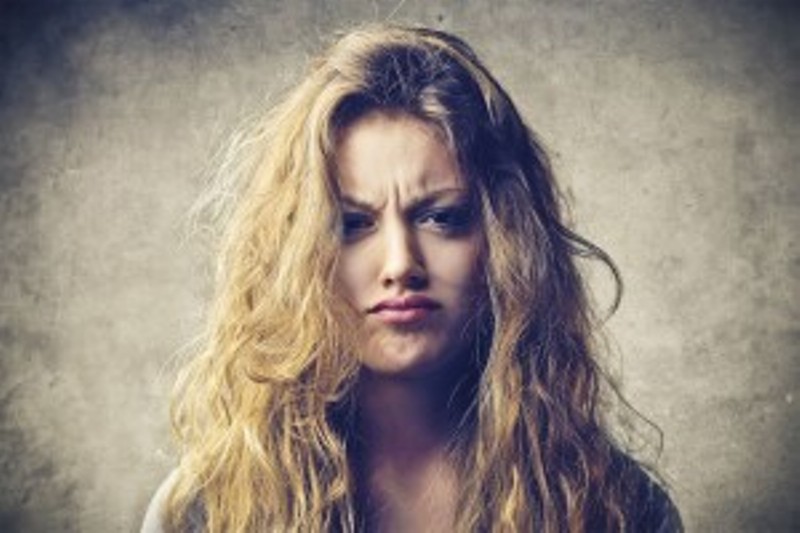 Article Name
18 Things I Want To Tell The Guy Who Thinks I'm Playing Hard To Get, When I'm Plain Disinterested
Author
Shilpa Kulkarni
Description
I'm NOT playing hard to get? Why don't you get that through your thick skull?