A good children’s book is one that even adults can enjoy, and The Little Prince by Antoine de Saint-Exupéry is definitely one that tops the list. The story is timeless, the lessons inspiring, and quotes which will make you think. It comforts those who are troubled, and disturbs those who have become too complacent.

I had read this book for first time when I was 8 years old. I read it again when I turned 18. This is the third time I am reading it, and I have realized how a book and its lessons mean different at different phases of life. This book is all about growing up, but never once forgetting how it feels to be curious and creative.

Le Petit Prince (in French) was first published in 1943. It is a novella written by Antoine de Saint Exupéry, who was a French aristocrat, poet, writer and pioneering aviator.

Counted among the most-translated book ever, it was voted as the best fictional work of the 20th Century in France. It was translated into 300 languages and dialects, and sells more than 2 million copies every year. No wonder it is one of the best-sell books ever published.

During the Second World War, Saint Exupéry fled to North America. During this period, in spite of his personal tragedies and falling health, he went on to write some of his best works including this book which is a delicate tale of friendship, loneliness, love, and loss. According to experts, the author has drawn from his aviation experiences in the Sahara Desert while writing this novella.

The novella has been, over the years adapted to various art forms and media, like radio plays, movie, television, opera, ballet, and audio recordings. It is must read, so get your copy NOW!

Quotes from The Little Prince

“And now here is my secret, a very simple secret: It is only with the heart that one can see rightly; what is essential is invisible to the eye.”

“It is much more difficult to judge oneself than to judge others. If you succeed in judging yourself rightly, then you are indeed a man of true wisdom.”

“All grown-ups were once children… but only few of them remember it.”

“It is the time you have wasted for your rose that makes your rose so important.”

“The most beautiful things in the world cannot be seen or touched, they are felt with the heart.”

“All men have stars, but they are not the same things for different people. For some, who are travelers, the stars are guides. For others they are no more than little lights in the sky. For others, who are scholars, they are problems… But all these stars are silent. You-You alone will have stars as no one else has them.”

“No one is ever satisfied where he is.”

“One day, I watched the sun setting forty-four times……You know…when one is so terribly sad, one loves sunsets.”

“It is such a mysterious place, the land of tears.”

“You become responsible, forever, for what you have tamed.”

“But the conceited man did not hear him. Conceited people never hear anything but praise.”

“Well, I must endure the presence of a few caterpillars if I wish to become acquainted with the butterflies.”

“What matters most are the simple pleasures so abundant that we can all enjoy them…Happiness doesn’t lie in the objects we gather around us. To find it, all we need to do is open our eyes.”

“Where are the people?” resumed the little prince at last. “It’s a little lonely in the desert…” “It is lonely when you’re among people, too,” said the snake.”

“A rock pile ceases to be a rock pile the moment a single man contemplates it, bearing within him the image of a cathedral.”

“What makes the desert beautiful,’ said the little prince, ‘is that somewhere it hides a well…”

“I am looking for friends. What does that mean — tame?”

“It is an act too often neglected,” said the fox. “It means to establish ties.”

“Just that,” said the fox. “To me, you are still nothing more than a little boy who is just like a hundred thousand other little boys. And I have no need of you. And you, on your part, have no need of me. To you I am nothing more than a fox like a hundred thousand other foxes. But if you tame me, then we shall need each other. To me, you will be unique in all the world. To you, I shall be unique in all the world….”

“All men have stars, but they are not the same things for different people. For some, who are travelers, the stars are guides. For others they are no more than little lights in the sky. For others, who are scholars, they are problems… But all these stars are silent. You-You alone will have stars as no one else has them… In one of the stars I shall be living. In one of them I shall be laughing. And so it will be as if all the stars will be laughing when you look at the sky at night. You, only you, will have stars that can laugh! And when your sorrow is comforted (time soothes all sorrows) you will be content that you have known me… You will always be my friend. You will want to laugh with me. And you will sometimes open your window, so, for that pleasure… It will be as if, in place of the stars, I had given you a great number of little bells that knew how to laugh”

“And your friends will be properly astonished to see you laughing as you look up at the sky! Then you will say to them, ‘Yes, the stars always make me laugh!’ And they will think you are crazy. It will be a very shabby trick that I shall have played on you…”

“Grown-ups love figures… When you tell them you’ve made a new friend they never ask you any questions about essential matters. They never say to you “What does his voice sound like? What games does he love best? Does he collect butterflies? ” Instead they demand “How old is he? How much does he weigh? How much money does his father make? ” Only from these figures do they think they have learned anything about him.” 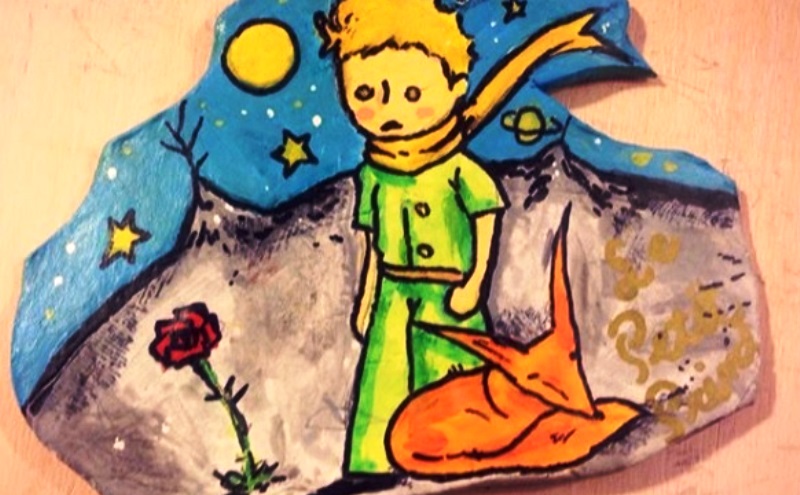