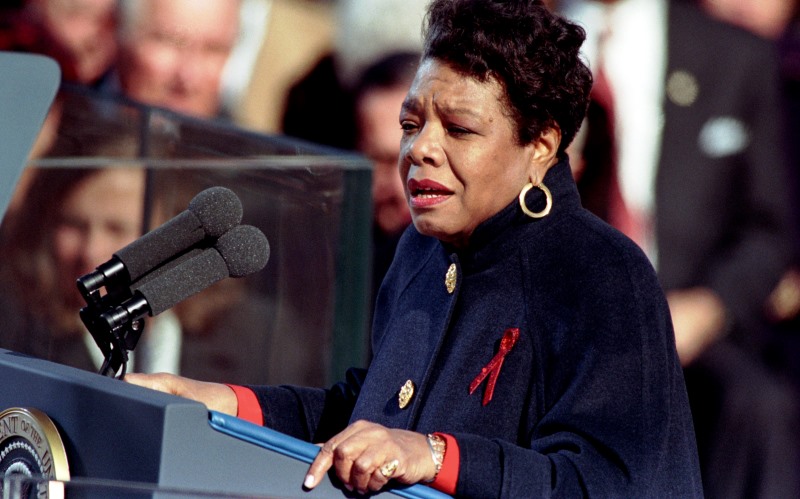 Popularly called “the people’s poet”, Angelou’s poetry is phenomenal and it will inspire you to rise.

Suggested read: Spoken Word Poems By Women That Will Lead You To Yourself

Here are our favorite 5 works from the complete collected poems of Maya Angelou that we think you will enjoy reading just as much as we did compiling.

You may write me down in history

With your bitter, twisted lies,

You may trod me in the very dirt

Does my sassiness upset you?

Why are you beset with gloom?

Pumping in my living room.

With the certainty of tides,

Did you want to see me broken?

Weakened by my soulful cries?

Does my haughtiness offend you?

Don’t you take it awful hard

Diggin’ in my own backyard.

You may shoot me with your words,

You may cut me with your eyes,

You may kill me with your hatefulness,

Does my sexiness upset you?

Does it come as a surprise

At the meeting of my thighs?

Out of the huts of history’s shame

Up from a past that’s rooted in pain

Welling and swelling I bear in the tide.

Leaving behind nights of terror and fear

Into a daybreak that’s wondrously clear

Bringing the gifts that my ancestors gave,

I am the dream and the hope of the slave.

Published in 1978, this poem has been called a, “proud, even defiant statement on behalf of all Black people”. It draws attention to ways in which oppression operates like writing some people down in history that Angelou speaks about in the first stanza of this poem. The poem also fills one with hope of a triumph despite the adversity and discrimination, which is want makes it such a marvelous piece. The poem was so influential that in 1994, none other than Nelson Mandela recited Still I Rise at his presidential inauguration.

But when I start to tell them,

It’s in the reach of my arms,

The span of my hips,

The stride of my step,

The curl of my lips.

I walk into a room

Just as cool as you please,

The fellows stand or

Fall down on their knees.

Then they swarm around me,

A hive of honey bees.

It’s the fire in my eyes,

And the flash of my teeth,

The swing in my waist,

And the joy in my feet.

Men themselves have wondered

What they see in me.

They try so much

But they can’t touch

When I try to show them,

They say they still can’t see.

It’s in the arch of my back,

The sun of my smile,

The ride of my breasts,

The grace of my style.

Just why my head’s not bowed.

I don’t shout or jump about

Or have to talk real loud.

When you see me passing,

It ought to make you proud.

The bend of my hair,

the palm of my hand,

The need for my care.

’Cause I’m a woman

It is not possible to have a list of Maya Angelou’s most stunning poems and not include Phenomenal Woman. This poem talks of how the narrator does not bother to adhere to what society considers phenomenal in a woman, and yet, she talks about all the qualities in her that make her phenomenal nonetheless. This poem featured in Poetic Justice, a 1993 American film.

My favorite line would definitely be:

They try so much

But they can’t touch

3. On the Pulse of Morning

Hosts to species long since departed,

The dinosaur, who left dried tokens

Of their sojourn here

On our planet floor,

Any broad alarm of their hastening doom

Is lost in the gloom of dust and ages.

But today, the Rock cries out to us, clearly, forcefully,

Come, you may stand upon my

Back and face your distant destiny,

But seek no haven in my shadow,

I will give you no hiding place down here.

You, created only a little lower than

The angels, have crouched too long in

Have lain too long

The Rock cries out to us today,

You may stand upon me,

But do not hide your face.

This poem was published in 1993, and Angelou recited it at the inauguration of President Bill Clinton on the 20th of January, 1993. She was the second ever poet to be honored this way. Before her, Robert Frost had recited “The Gift Outright” at President John F. Kennedy’s inauguration.

on the back of the wind

till the current ends

and dips his wing

in the orange sun rays

and dares to claim the sky.

But a bird that stalks

down his narrow cage

can seldom see through

his bars of rage

his wings are clipped and

his feet are tied

with a fearful trill

but longed for still

and his tune is heard

on the distant hill

for the caged bird

The free bird thinks of another breeze

and the trade winds soft through the sighing trees

and the fat worms waiting on a dawn bright lawn

and he names the sky his own

But a caged bird stands on the grave of dreams

his shadow shouts on a nightmare scream

his wings are clipped and his feet are tied

with a fearful trill

but longed for still

and his tune is heard

on the distant hill

for the caged bird

Maya Angelou’s first autobiography, “I Know Why The Caged Bird Sings”, gets its name from a line in Paul Lawrence’s poem, Sympathy. This poem is inspired by Sympathy, and uses the imagery of a caged bird to talk about discrimination toward African Americans. For those of you who don’t know Paul Lawrence Dunbar, he was an African American poet too.

Caged Bird is different from Sympathy in that it also talks about the difference between the whites and the blacks by using the imagery of a caged bird and a free bird.

The last poem on this list, Africa, speaks of the continent’s history. It speaks of how Africa wa plundered by European imperialist for its resources and its people being taken as slaves.

In the first stanza, Angelou compares Africa to a woman. In the second, she says that white invaders “took her young daughters, “sold her strong sons” and “bled her with guns”.

Like all her poems, she ends the poem on a note filled with hope when she says,

her history slain
now she is striding
although she has lain.

That is all we have on today’s post on the complete collected poems of Maya Angelou. Did you like what you just read? Let us know in the comment section below.