Some weddings are magical, some are enchanting. And this couple’s wedding was both – literally! Magician Justin Willman tied the knot with photographer Jillian Sipkins over Labor Day weekend, and the couple made sure that people would talk about it for years to come – at least. Plus, they’re going to cherish and wow their kids later too with the pictures they managed to capture.

How did they make it memorable, you ask?

Well, for their first dance as newlyweds, the couple chose to sway to ‘I Put A Spell On You,’ which was the perfect accompaniment to Willman’s levitating dance move. Yep, he actually pulled off the coveted The Matrix move.

Suggested read: Father’s letter to his daughter with Down Syndrome…

Not just that, Willman’s father’s reaction to his son’s dance move is really priceless. You can notice the older man’s reaction in the picture above. The photo was originally taken by wedding guest Enrico de la Vega. Willman put it up on his Instagram account and captioned it, “My dad’s reaction. Worth every penny.” We agree, Justin.

Sharing another picture of his levitating dance move, Justin captioned it, “She put a spell on me.”

If you think the couple seems kinda recognizable, that’s because Justin and Jillian made a Drunk History-esque video on YouTube about how they first met. The video went viral before their wedding dance photos wowed the Internet.

With the clever wedding hashtag #JustinTakesASip, more of the couple’s first dance images were shared, one of which featured Willman casting a spell over Sipkins’ head with abracadabra hands. Wait, not just that, but the couple cut their cake in an innovative manner as well, chopping it with a long saber sword! Along with the snap of them cutting the cake, Willman wrote, “I HAVE A WIFE NOW.”

Check out the video of Justin doing his levitating dance move here:

Have you done anything crazy on your wedding day? What did you think of Justin’s levitating dance move? Tell us in the comments below! 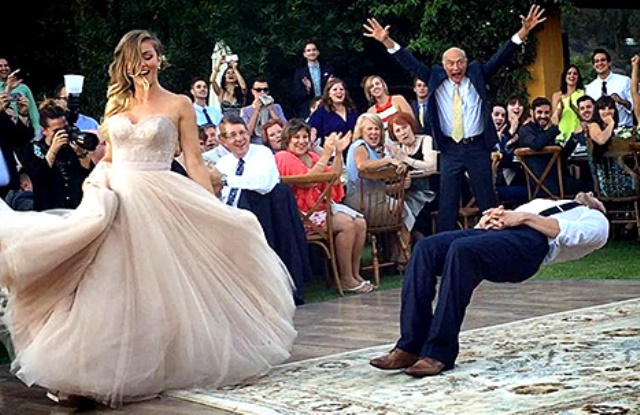