Face painting isn’t just for kids and it’s definitely not just painting whiskers or rainbows or stars and stripes on your cheek. Makeup artist Laura Jenkinson takes it up a notch with her amazing and artistic lip art. So what is it that Laura does? Well, she just turns her lips into various cartoon characters with just makeup! And it’s fricking amazing! In fact, you could say that it’s like cosplay for your lips!

She has painted on animals, cartoon characters, and even Disney and Pixar’s animated characters. Her Instagram is flooded with pictures of her lip art, and some videos too, where she’s seen applying makeup to her lips. Even though it’s hard to imagine cartoon characters on someone’s lips, the likenesses are truly bang on. Plus, she also adds shadows and highlights too. Laura paints these characters in such a way that her facial features figure as though they belong to the characters instead of being a part of her face.

The obviously talented makeup artist has so far drawn Shrek, Genie from Aladdin, the Powerpuff Girls, Popeye, Nemo from Finding Nemo, Timon and Pumba from The Lion King, Kermit the Frog, Bugs Bunny, Goofy, Winnie the Pooh, Dewey from The Family Guy, Mario, The Simpsons to name a few.

Suggested read: 12 DIY makeup tutorials we can’t seem to get enough of

Laura, who is from London, has received more than 15000 likes on some of her posts on Instagram.

Talking about her inspiration for this, Laura Jenkinson said,

“I’d seen loads of other fantastic makeup artists on Instagram and I wanted to do something similar and on a bigger scale so I started doing about one a week.”

She said she creates her amazing lip art using theatrical makeup, but on occasion, uses regular makeup too. She said,

“I use theatrical makeup normally, but occasionally use lipstick if I need to get the exact shade of something.”

Although the images she paints on her face seem super accurate, she says her method of achieving the final look is quite simple. She said,

“I find a picture and then just hold it up to the mirror as a guide and draw straight onto my face – it’s easier than you think! Ironically, drawing onto someone else is more difficult – I think it’s more straightforward drawing onto my own face.”

Obviously, Laura is thrilled with the response she’s gotten for her work, and the positive feedback has been a boost to her art. She said,

“People always say it makes them really happy and it’s nice to bring a bit of joy.”

Check out more of her lip art here: 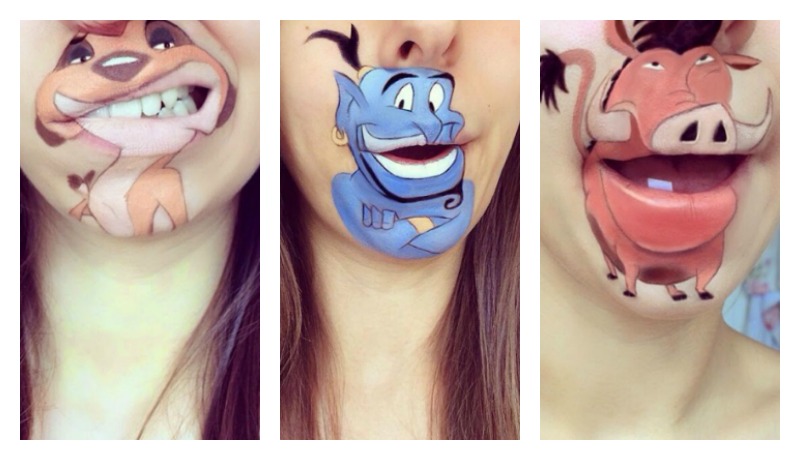