Guy proposes to girlfriend with a global scavenger hunt!

Marriage proposals are not what they used to be. Now, the bigger the better; the splashier the better. To help plan extravagant, unforgettable, and memorable marriage proposals, even ‘marriage proposal consultants’ have emerged onto the scene. Some go all out to ask their partners one of the most questions of their lives, while some others keep it simple and direct. Whatever be your mode of asking that one question, this guy beats them all – hands down!

Meet Brett Arnold, 30, and Amy Linville, 28, of Colorado, Denver. Brett and Amy have been together for the past eight years, and both of them are travel enthusiasts. While Brett works as a project manager, Amy just concluded her master’s degree while also working as an instructional designer at a college. So, when Brett decided to pop the question, he went all out to suit his lady love’s interest – traveling. He planned and executed the perfect global scavenger hunt, which ended in a marriage proposal! 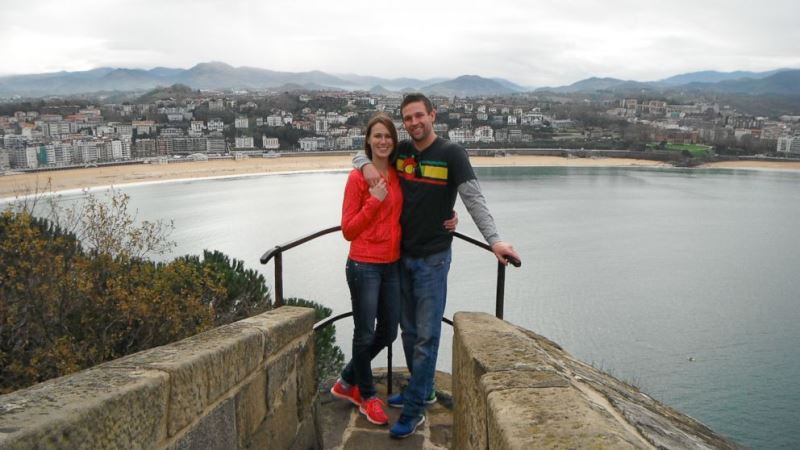 “Brett and I have been together for eight years,” said Amy. “As a graduation gift he told me I had to go on a scavenger hunt. We’ve traveled the world together, so it makes sense that he would do this.”

Brett led Amy atop a mountain in their neighborhood, where he had left her the final clue on that day.

“When I reached the top there was a bag with a clue inside that said, ‘Pack your shit. You leave at 7AM,” said Amy. “I wasn’t really excited because Brett’s always joking and messing with me. He handed me a one-way ticket to Tokyo and a map. I was leaving in 13 hours.”

The note with Amy’s first clue

Brett told Amy that as a graduation gift, she would embark on a world scavenger hunt, with Tokyo being the first stop.

“I still did not believe him,” Amy said. “No way … I had work, Christmas parties, plans … what about my plans?! Later I would find out that he contacted my boss months ago to arrange it and had let everyone know that I would not be making any appearances at Christmas parties.”

Brett drove Amy to the airport, and hours later, she found herself in Tokyo, in pursuit of her next clue.

“Everything was in Japanese and all I had was a map to a friend’s apartment that lives there,” she said.

Amy found her next clue on the fridge of their friend Mike’s apartment in Roppongi, Tokyo.

The clue Amy found in Tokyo

The consummate planner that he was, Brett had roped in Kassie, a childhood friend of Amy’s, who currently lives in Okinawa with her husband. It was from Kassie, whom Amy hadn’t seen in years, who gave her Clue no. 8.

“I was in Japan for about seven days,” Amy said. “I traveled on the speed train, played with snow monkeys in Jigokudani, did a Santa pub crawl, sang karaoke with some German girls I met, ate lots of sushi, felt my first earthquake, and had an absolute blast. I’m definitely a free spirit.” 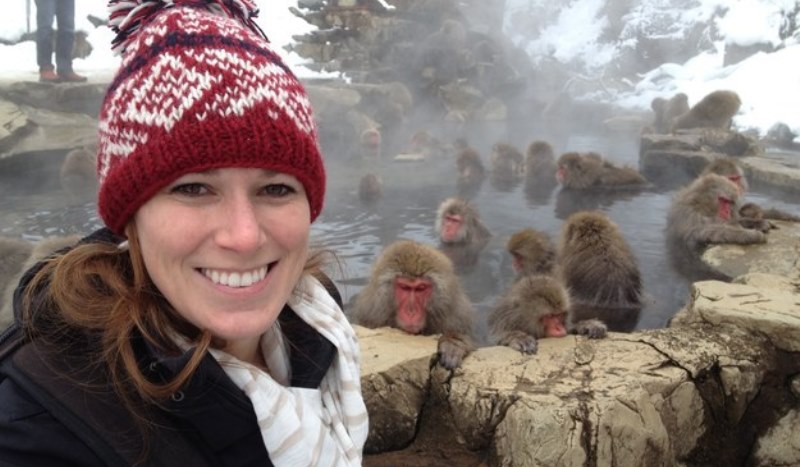 Amy with the snow monkeys in the background

Next, armed with her previous clue, and in search of the next one, Amy was off to Barcelona. But when she got to Casa Bar Pepe, where her next clue was supposed to be, the bar was apparently closed for Christmas.

“Brett was a little upset about this one; he had overnighted the clue to the bar owner, and the bar owner said he would definitely be open,” said Amy.

In the end, Brett emailed her the clue, which saw her off to San Sebastian. 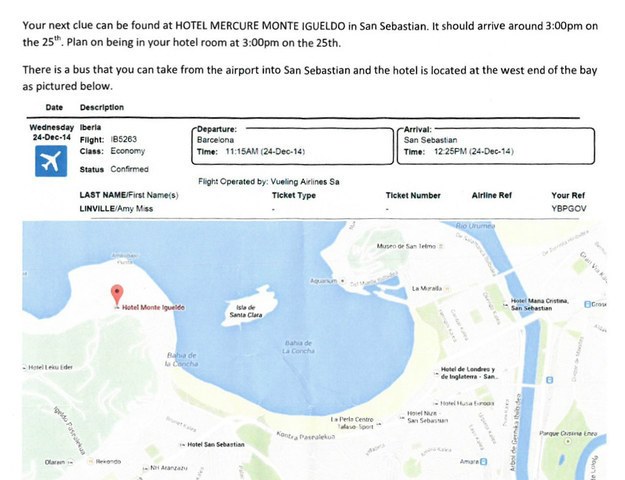 The clue that Brett had to email Amy, that sent her from Barcelona to San Sebastian

“In San Sebastian, Brett put me up in the most beautiful hotel I have ever seen: Hotel Mercure Monte Igueldo. I was instructed that a clue would be delivered to my room on Christmas Day at 3pm.”

As promised, Amy received the clue, which contained instructions for her to hike up a peninsula across the bay from the hotel and to find the view in the picture below: 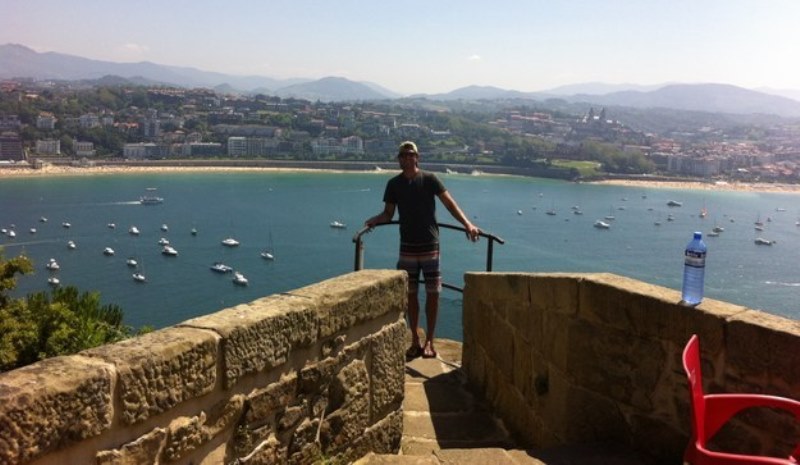 The overlook that Amy had to find on the peninsula

Amy confessed that she was slow hiking up that day, and was feeling a ‘little depressed’ to find herself alone on Christmas.

“I know, I know … I should have been jumping for joy to be traveling around the world, and I was, but this day I was a little sad,” she said. “I knew Brett was back home celebrating with family; he had been texting me and FaceTiming me so I thought there was no way he would be joining me.”

After trudging up the peninsula, Amy, to her dismay, found four other overlooks that looked exactly like the one in the picture that Brett had left as a clue. 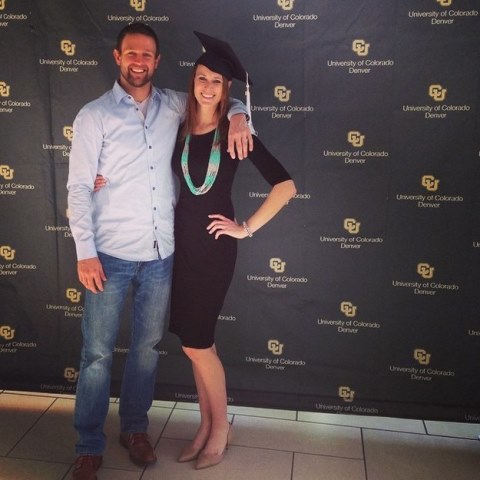 Brett and Amy at her graduation

“It was raining, cold, and starting to get dark. I was scouring park benches looking for my next clue and thought I should turn back and try again the next day, when I ran into a Spanish man who knew the spot where the photo was taken,” said Amy.

This man showed her to a cliff and pointed out the spot where the picture was taken. And as she was hiking down the last few steps, she realized her boyfriend was there with her, hiking up at the same time.

“I was completely shocked,” she said. “He had really thrown me off that day! I asked him if there was still a clue or if he was my clue … He said, ‘Actually, I have it right here…’”

It was then and there that Brett pulled out a ring from his pocket and popped the question.

“He asked me if I was willing to go on another adventure with him … and I said, ‘Of course!’” 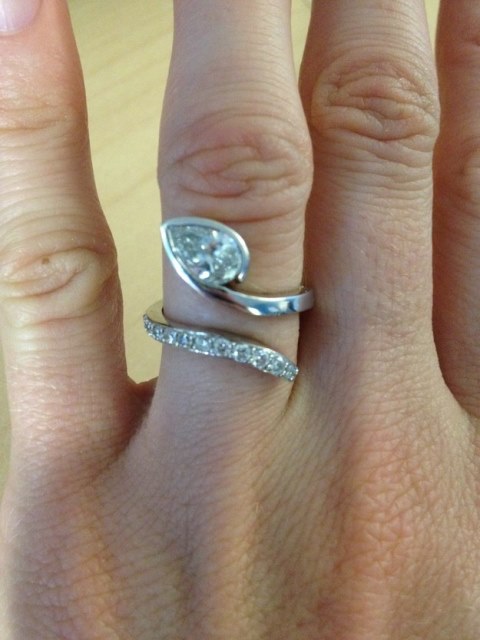 The ring that Brett proposed Amy with

Brett had come prepared with champagne to celebrate the moment, but since he had forgotten the glasses, both took turns sipping it from the bottle before hiking down, affianced.

Amy said that Brett had been planning to propose by way of a scavenger hunt for about four years, but started putting together all the elements of it just about eight months before her graduation. The happy couple is to wed in October, in Fort Lauderdale.

“Our love for travel runs deep, as you can tell from this engagement story!” said Amy. “He is my biggest fan, my travel partner, my compass.” 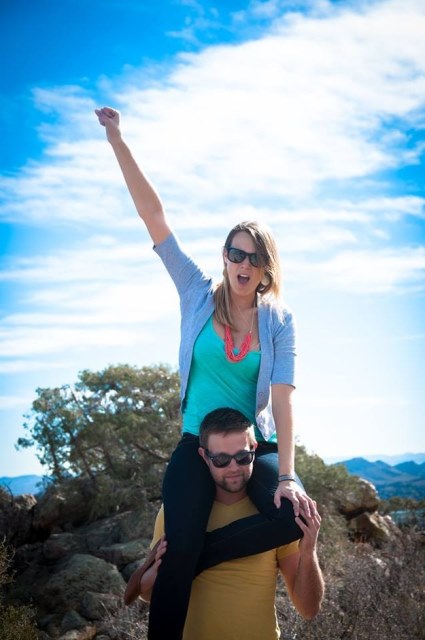 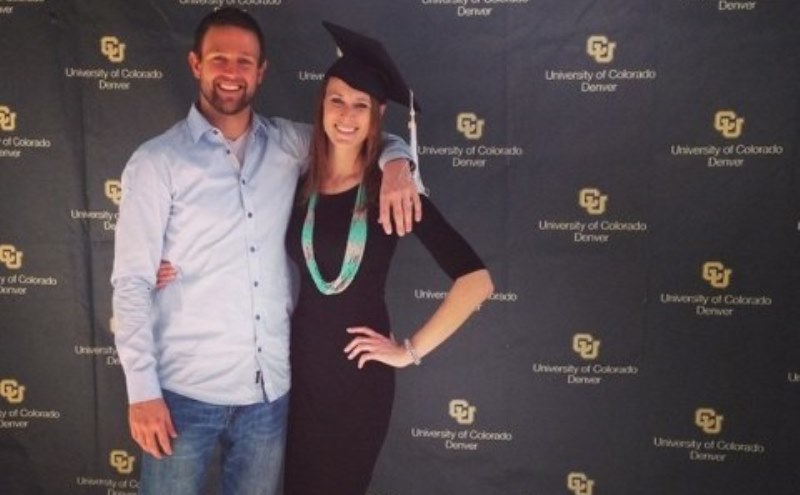