Seems that we have now come to a stage where dropping to one knee holding an engagement ring just doesn’t cut it anymore. Some men go to extreme lengths to make a proposal happen, like a global scavenger hunt marriage proposal, or a Disney Frozen-themed marriage proposal with all the trappings, or a dad taking his newborn son’s help in proposing marriage to mom. And others take another route and go for the thoughtful proposals, whether their attempts to viral or not. This one clearly belongs to the latter category for sure, and what’s more, it has crossed more than 5 million views on YouTube!

Meet Dean Smith. When he decided that he wanted to spend the rest of his life with his girlfriend, Jennifer, he planned an epic marriage proposal, taking 365 days to prepare it. Apparently, Jennifer is a fan of countdowns, so, Dean counted down from 365, videotaping himself each and every day, asking Jennifer to marry him, via a message written on a white board, with the date visible on the bottom. The messages vary from ‘will you marry me, Jen,’ to ‘make me your husband,’ to ‘make me the happiest man in the world,’ to ‘be my wife, Jen,’ and other such variations. Oh, and he also holds up several messages with him telling her how much he loves her too. 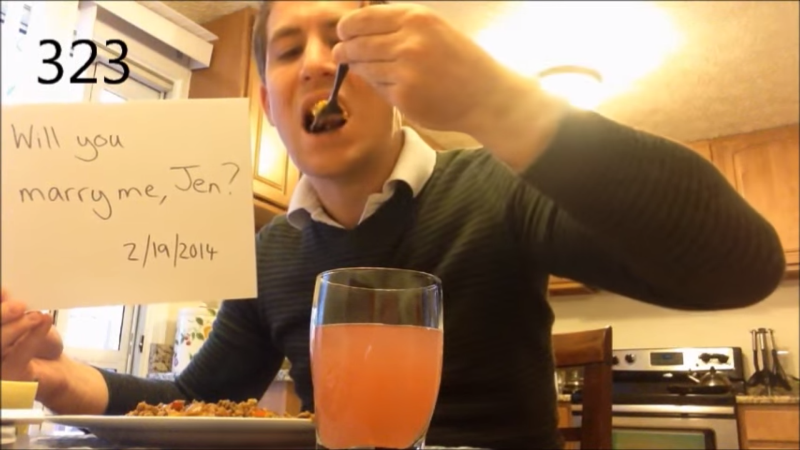 Dean started to videotape himself on January 8th, 2014, Jennifer’s birthday. Another endearing thing about the video is that Dean holds up the white board with his messages to Jennifer while doing everyday things like brushing his teeth, cooking, working at his lab, eating breakfast, folding laundry, and blowing snow off the car.

The video includes snippets from Dean and Jennifer’s lives together, and also their pets, a cat and an adorable dog. 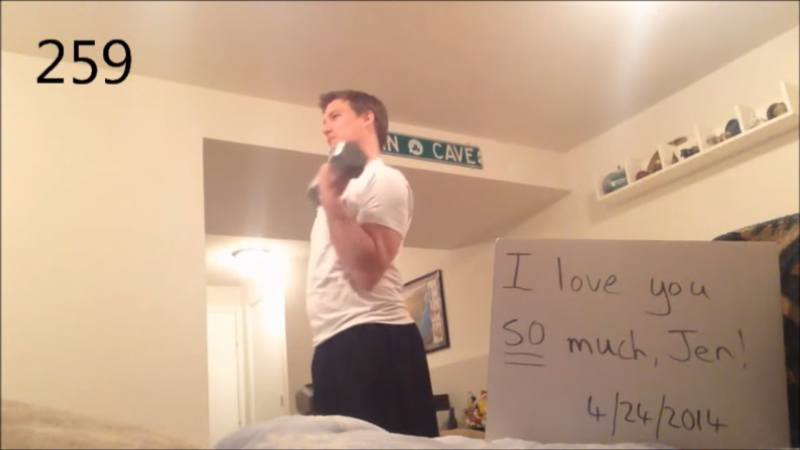 Dean Smith asking Jennifer to marry him while lifting his dumbbells

The big moment came while they were vacationing in Aruba with Jennifer’s family. In the final few days leading up to the big day, her family members hold up the white board with Dean’s messages on them. In the video, Jennifer’s family escorts her to a beach using white boards similar to those Dean used, sat her down in a chair, and asked her to watch Dean’s video.

In the video, Dean said,

“I just wanted to let you know how much I love you, how incredibly smart, funny, caring and stunningly beautiful you are. To me, you are perfect.”

“Jennifer, I love you more than anything in the world,” he said. “I know that you’re the person I want to spend the rest of my life with, but I want the timing to be perfect and make this moment special. For the next year, I’ll show you how much I love you and that you’re in my thoughts every day. I want to marry you.”

At the end of the video, he instructs her to turn around, which she does with tears in her eyes. Sure enough, Dean’s there, with rose petals strewn, gets down on one knee, and proposes to her.

The beautiful 365 day marriage proposal concluded with a big group hug from family and friends, and lots of happy tears all around.