A marriage proposal is a once in a lifetime event. You want it to be special and memorable and worthy of cherishing it long after your marriage to your sweetheart. While we have seen almost every kind of marriage proposal there is, this one will surely make you go ‘Awww…’ Coz this happened in Disney World and it’s been tagged as one of the most romantic among all of the proposals till date. 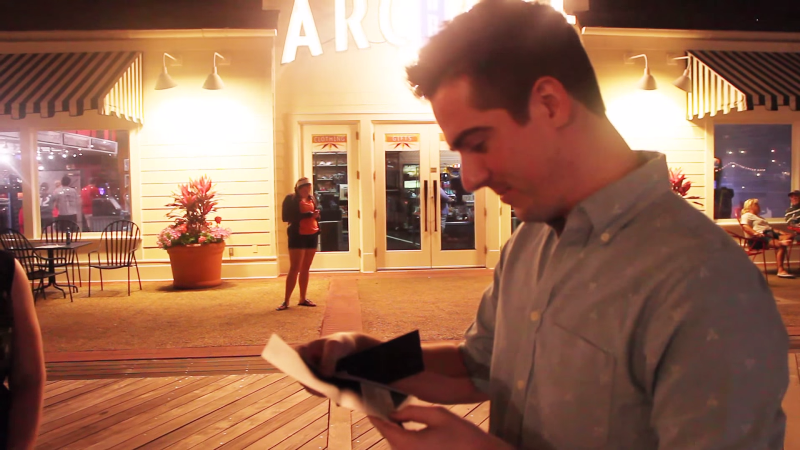 Gavin reading the first of the notes sent by Patrick

This is a proposal made by Patrick Santos to his beloved Gavin Hatch. Mind you, Santos had to get creative so that Hatch wouldn’t get even a whiff of the surprise he’d planned. So, thinking that he was going out for drinks with a friend at Disney’s Boardwalk in Florida, Hatch was handed a card when he arrived.

“Gavin, this very moment is the start of our new adventure together. You always talked about being in love like in the movies, however, all of the best love stories have one thing in common. You have to go against all odds to get there.” 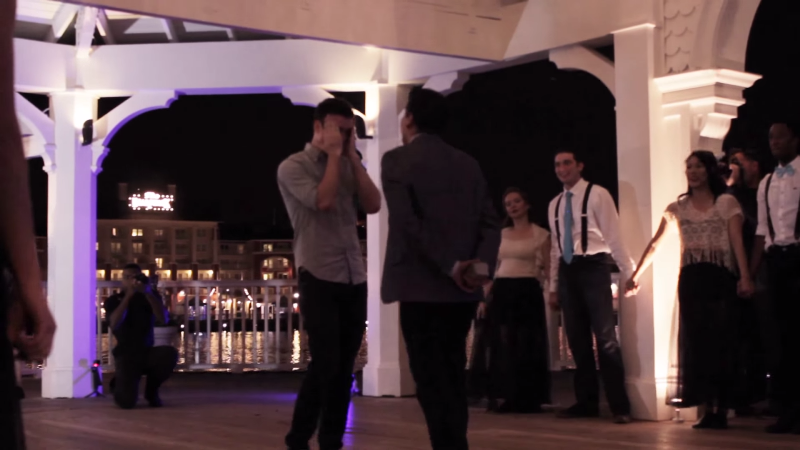 Gavin unable to hold back tears as Patrick approaches him

As Gavin makes his way through the boardwalk, one by one, his friends hand him notes left by Patrick, until he’s met by a spectacular dance performance by a group of dancers to Katy Perry’s ‘Unconditionally,’ followed by a proposal by Patrick.

“I don’t think Gavin had a clue what was going to happen to him that night,” Patrick told The Huffington Post. “I had to make up a few stories in order for all of this to be possible.” 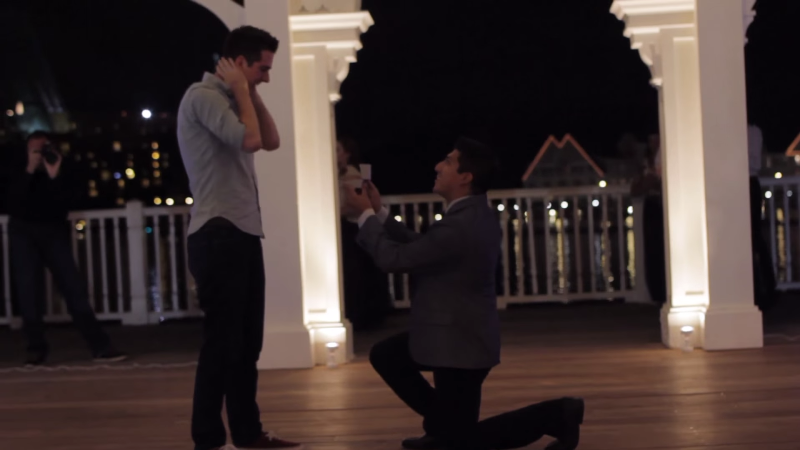 Patrick going down on one knee to propose to Gavin

Seemed like all of Patrick’s efforts paid off when Gavin admitted that he’d had no idea about it, and that he was absolutely blown away by the proposal.

“When I was handed my first card, I knew Patrick was up to something … as we continued to walk the boardwalk and I saw more and more of my friends, I started to think that it might be a proposal, but it just didn’t hit me until I was handed the last card by my best friend,” he said. “I will admit though, I always knew that if Patrick was the one to pop the question, it would be a big and unforgettable event, and it sure was.”

Well, it did make you go awww… didn’t it? Told ya, this was indeed going to be one of the most romantic marriage proposals you’ve seen!

Article Name
Romantic Disney World Proposal Will Make You Believe in HEA
Author
Chaitra Ramalingegowda
Description
You might have seen many marriage proposals till now. But this Disney World proposal will surely make the romantic in you go 'Awwww...'