If you are under the impression that black and white is boring, think again because the divas of Bollywood are here to prove to us that monochrome fashion can be anything BUT boring. Whether it is black, or white, or a stunning marriage of the two in an outfit, Bollywood is here yet again to save the day for us mere mortals, starved of chic and simple fashion inspiration.

The universally acknowledged style icon of Bollywood does not miss out on her style quotient, even when she is stepping out of the airport, in her tied black coat and white pleated midi from BODICE.

Deepika in an LBD for the Mumbai promotions of her film Bajirao Mastani is an absolute vision. This Dolce and Gabbana creation looks fabulous because of the lace bodice and the simple white Peter Pan collars.

Alia Bhatt knows how to work the all-black look to her benefit, as demonstrated in this stunning Shivan and Naresh dress which she wore to the promotions of her film Kapoor and Sons.

4. Athiya Shetty shows how suits are for everyone

Athiya Shetty looked ravishing in a black and white tailored corset suit by Kanika Goyal, which she put on for the Hindustan Times Most Stylish Awards, in which she got the award for Most Stylish Newcomer, and we couldn’t agree more.

5. Karisma Kapoor and her eternal elegance

The elder of the Kapoor sister seems to be growing younger every day. Here too, she looks resplendent in this Gaurav Gupta all black outfit consisting of a peplum top with a stunning cape and trousers.

If you think monochrome can only be pulled off with couture and casuals, think again because Kangana Ranaut totally knows how to rock the white saree by Sandeep Khosla.

8. Aishwarya Rai Bachchan is a vision in black

Aishwarya Rai looked stunning for her Filmfare shoot in a gown by Theia Couture in all black, with a classic bodycon black dress and a black over-stole in lace.

You can’t have Sonam Kapoor only once on a list that teaches you avant garde fashion. She looked like a goddess in her Ralph and Russo all-white sequinned cape dress for this year’s Cannes Film Festival.

Shraddha Kapoor knows that monochrome can be cute too, especially in short, skater dresses such as this one by Alice and Olivia, which looks so chic, yet so street smart.

Nargis Fakhri rocks black monochrome like no other in her black overalls by Madwell, which makes her look comfortable as well as fashion forward, because conventionally, you would expect dungarees to be funky and colourful, but here, they look edgy as well.

12. Prachi Desai suits up in black and white

Prachi Desai looked her usual cute self in a monochrome outfit with black tailored trousers and a white dress shirt with a simple black bow detail, for an event with The Times of India.

Katrina Kaif looked ridiculously good in this Philipp Plein cut-out dress in all black for the annual award show hosted by GQ India, proving yet again that black is far from being boring. 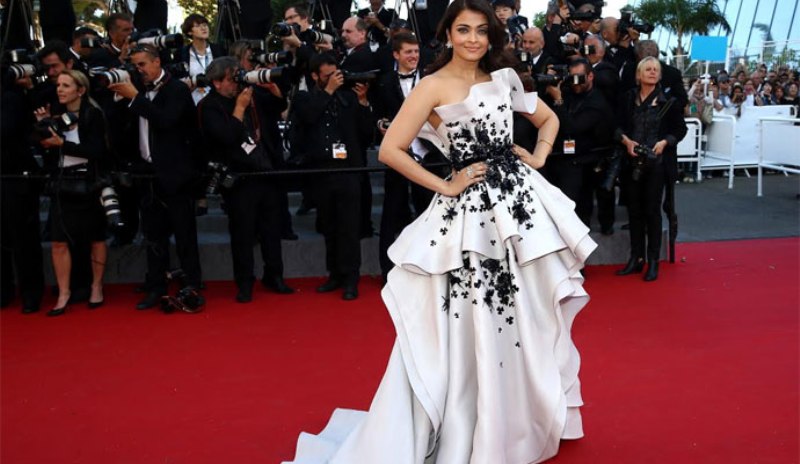 Article Name
Monochrome Fashion Fever: Bollywood Celebs Give Us Major #MonochromeMadness
Author
Aishani Laha
Description
Because monochrome fashion is calling out to our hearts, like never before!