Raksha Bandhan: 20 Quotes That Exemplify The Bond Between Brothers And Sisters

If there’s one relationship that’s unique, it’s that of a brother and sister. Okay, EVERY relationship is unique in its own way, but there’s something about this particular relationship that gives me the warm fuzzies. Maybe because I share a very close bond with my own brother.

Brothers, especially elder brothers, are very protective of their sisters. They may fight, call each other names, kick, push, shove, punch, hit – but nobody else besides them gets to do that! Only they have the authority to do that. If somebody even looks at their sisters the wrong way, then they’re done for! Lord help them! Brothers are there since their sisters are in their diapers. They take on whichever role needs to be filled in their sisters’ lives – a brother, a mentor, a guide, a friend, a protector, and sometimes even that of a parent – effortlessly too. You may doubt your abilities or skills, but they have full confidence in you achieving great things. They believe that you’re made of sterner stuff and can take on the world with your head held high. They are there when you need that push to realize your full potential.

They are your one-stop solution to all your problems. Broken hearts? One ice cream tub coming right up! Got laid off work? No problemo – forwards your resumé to everyone in their contacts list. Parents pushing you to get married? No way, no how, until you’re ready or the right guy comes along – whichever happens, it’s fine with them; they’ll stand by you. Feeling blue? They’ll be there to just hold your hand or tell you everything’s going to be alright – whichever one you need the most, even though they don’t know what’s going to happen in the next minute. Basically, a brother is the best friend a girl could ask for! And it holds true the other way round too. A sister is the best friend a guy could ask for, for she comes out with her claws and teeth bared if anyone dares hurt her brother. See, that’s why I said that this bond is a unique one. Or rather, more unique than any other relationship.

Since today is Raksha Bandhan, the festival that celebrates the unique bond between a brother and his sister, we thought we’d collate a list of awesome Raksha Bandhan quotes about brothers and sisters. Take a look!

1. “Brothers are like streetlights along the road, they don’t make the distance any shorter but they light up the path and make the walk worthwhile.” – Anonymous You can always count on your brothers to walk you through the rough patches of your life.

2. “How do people make it through life without a sister?” – Sara Corpening 3. “The mildest, drowsiest sister has been known to turn tiger if her sibling is in trouble.” – Clara Ortega While brothers are protective of their sisters, the same holds true for the other way too. Nobody but sisters have the right to annoy their brothers! 😉 Your friends may leave you when the times are tough, but your brother NEVER will.

5. “Our siblings push buttons that cast us in roles we felt sure we had let go of long ago – the baby, the peacekeeper, the caretaker, the avoider… It doesn’t seem to matter how much time has elapsed or how far we’ve traveled.” – Jane Mersky Leder No matter how old you are or how far away you might have drifted apart, there’s nobody like your siblings, be it a brother or a sister.

6. “Our brothers and sisters are there with us from the dawn of our personal stories to the inevitable dusk.” – Susan Scarf Merrell 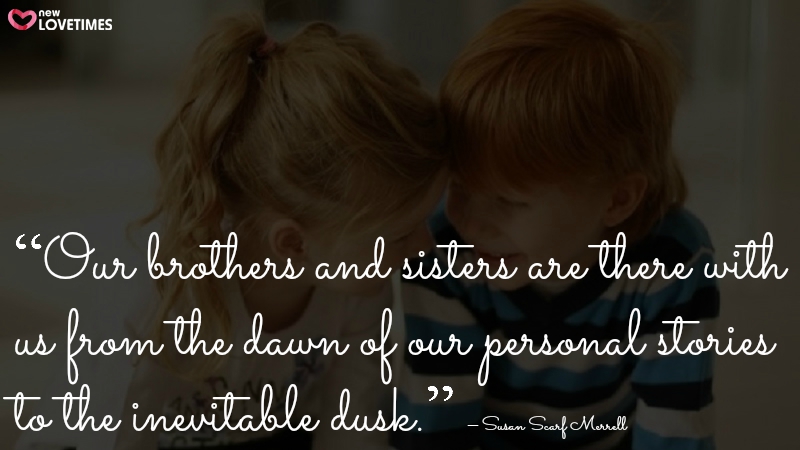 Brothers and sisters start their lives together; they see each other through thick and thin, till the end of your lives. 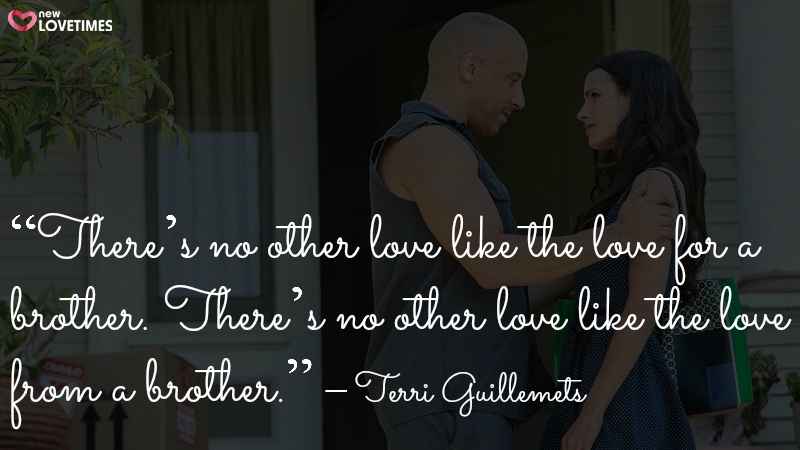 You just can’t compare the love between siblings, especially between a brother and sister.

Suggested read: 30 quotes dedicated to fathers all over the world

8. “A sibling may be the keeper of one’s identity, the only person with the keys to one’s unfettered, more fundamental self.” – Marian Sandmaier 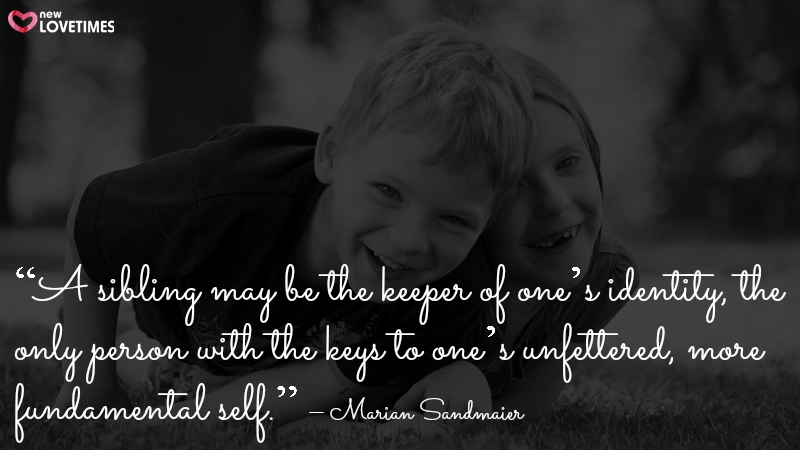 There’s no fear of being judged, however outrageous or terrific your ideas and thoughts are. You can be your true self with your siblings. 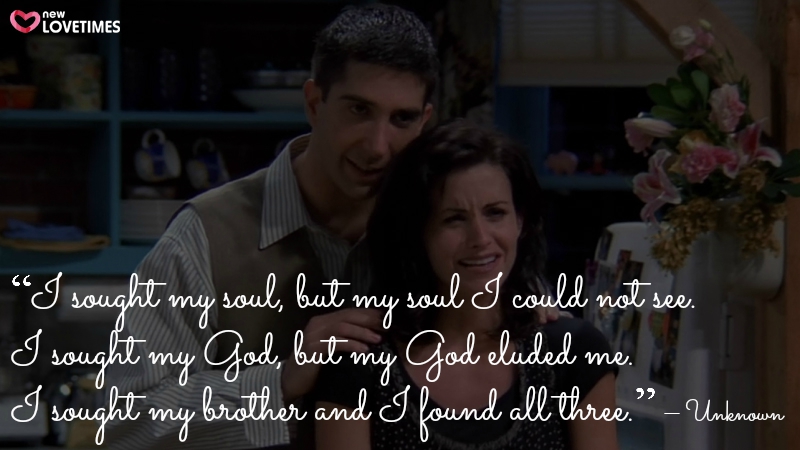 Is there anything to explain in this one? There sure ain’t.

10. “Brothers and sisters are as close as hands and feet.” – Vietnamese proverb 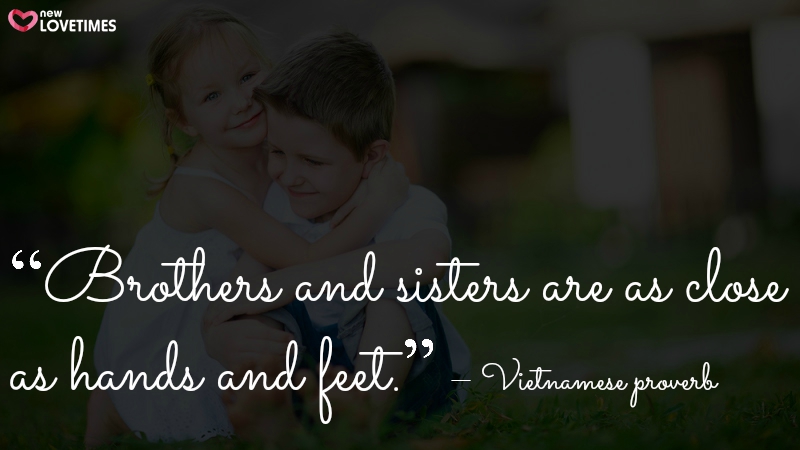 Your hands and feet are an intrinsic part of your body. One without the other doesn’t make sense. A similar bond exists between brothers and sisters.

11. “A brother is a friend given by Nature.” – Jean Baptiste Legouve 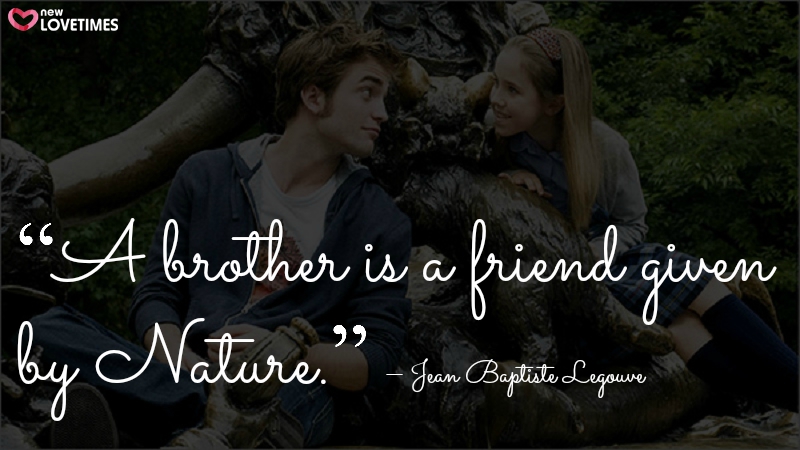 Your brother is your first guy friend, they say, and it’s not for nothing that it is so. He is your first window into the male world.

12. “Like branches on a tree we grow in different directions, yet our roots remain as one. Each of our lives will always be a special part of the other.” – Unknown 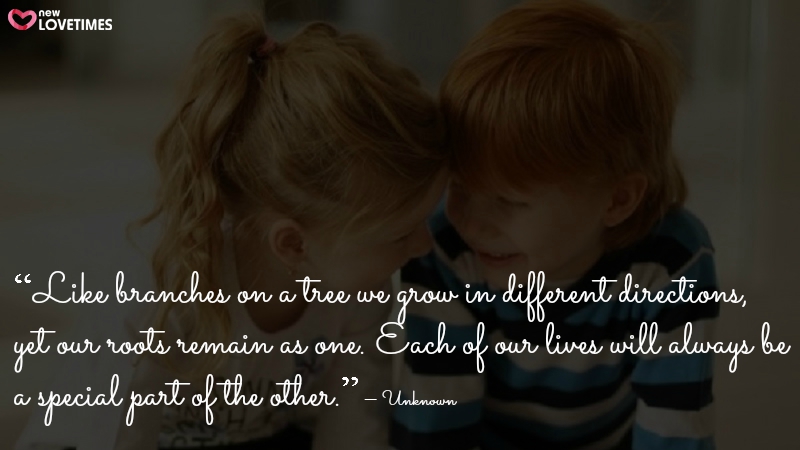 You and your brother may grow older, move away, and lead your separate lives. But you both will always have your roots intact and one. You are connected by something more powerful than a mere blood bond; you are siblings.

13. “Your parents leave you too soon and your kids and spouse come along late, but your siblings know you when you are in your most inchoate form.” – Jeffrey Kluger Your siblings have known you since you were in your diapers. They’ve seen you at your worst, and at your absolute worst. And yet, they still love you.

14. “Having a sister is like having a best friend you can’t get rid of. You know whatever you do, they’ll still be there.” – Amy Li 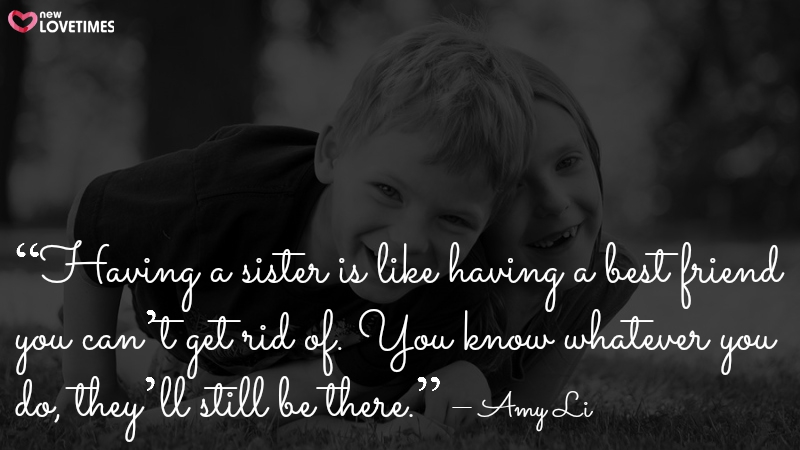 Life happens, and you both lead your own lives. But whatever you do and wherever you may be, you can always count on your sister (or brother) to be there for you, no matter what.

15. “In the cookies of life, sisters are the chocolate chips.” – Anonymous. Awwww! Does this mean I’m a chocolate chip too? 😉

16. “Sometimes being a brother is even better than being a superhero!” – Marc Brown Who wants a superhero when you can have a brother who’s better than one?

17. “Older siblings… the only people who will pick on you for their own entertainment and beat up anyone else who tries.” – Anonymous Yep, yep. This is absolutely true! Your brother will take on whatever role you need in your life – a brother, a bother, or a friend. He’s always there for you to rely on.

19. “Siblings: children of the same parents, each of whom is perfectly normal until they get together.” – Sam Levenson Demure individuals who become absolute devils when they get together! Don’t tell me you can’t relate to this? 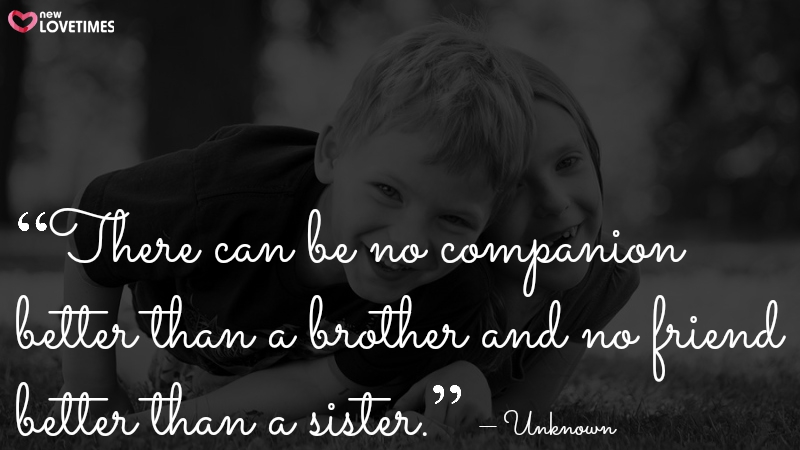 If you can’t be friends with your own brother or sister, I don’t know that if you can ever be with anybody.

Happy Raksha Bandhan to all the brothers and sisters out there!!! May your bond strengthen with each passing day!

What is your fondest memory of your brother? What prank did you pull on your sister that got her in trouble? In what special way are you celebrating this Raksha Bandhan? Tell us in the comments below!

Article Name
20 Quotes On The Bond Shared By Brothers And Sisters
Author
Chaitra Ramalingegowda
Description
Brothers and sisters share a unique bond, that is strengthened throughout their lives. Check out these 20 quotes which exemplify that bond.