Words by Shane L. Koyczan That We Love

Shane L. Koyczan is a Canadian poet and writer. Born in Yellowknife, Northwest Territories, Koyczan grew up in Penticton, British Columbia. In 2000, he became the first Canadian to win the Individual Championship title at the US National Poetry Slam. Together with Mighty Mike McGee and C. R. Avery, he is the co-founder of spoken word, “talk rock” trio, Tons of Fun University (T.O.F.U.).

Koyczan performed a variation on his piece “We Are More” at the Opening Ceremony of the 2010 Winter Olympics in Vancouver.

Here are some of our favorite Words by Shane L. Koyczan that we hope you will enjoy reading as much as we have enjoyed curating them for you.

“I’ve been told
that people in the army
do more by 7:00 am
than I do
in an entire day

But if I wake
at 6:59 am
and turn to you
to trace the outline of your lips
with mine
I will have done enough
and killed no one
in the process.”

but I am here to learn.”

“And you are worth the time it takes to take the time to get to know you. We’ve managed to muttle through the awkward stage of i like you and you like me, but when we both finally said ‘yes’ life became a multiple choice test, not knowing anything we became each others best guess. and, holding your hand is less like exploration and more like discovery. lady, i don’t have to study you to be sure. you’re the choice i made before i knew what the other choices were”

“And as for romance? Well, I want that too.
I want to fall asleep next to you, 100 times a night,
so I can know you 100 times better before we hit the day light. And despite all of this,
I also want amnesia so I can relive each kiss with a perfect newness
that leaves me smashed in the arms of rapture. I want the sky to fracture under
the impossible weight of an apology because I’m sorry. I’m sorry that I want so much.
I’m sorry that I’m using “I’m sorry” as a crutch to lean on for so long
but if you sing me that song of sweet logic again then I promise to make the effort
to stand on my own. There is a reason that our hearts are more like a muscle
and less like a bone. I’ve known so many people who have grown up flexing
in front of mirrors and falling for their own reflection as if that’s adequate but that’s bullshit.
Because we only get now until the time we go and if they’ve only got time to love themselves
then nobody is going to be around to hear the sound of their heartbeat echo.
So lady, don’t expect an apology when I tell you I’m only held together
by a heart that pumps blue, it’s the strongest muscle in my body and I’m flexing it for you”

they have to be wrong”

Beethoven
his thoughts moving at
the speed of sound
transforming emotion into music
and for a moment
it was like joy
was a tangible thing
like you could touch it
like for the first time
we could watch love and
hate dance together
in a waltz of such precision and beauty
that we finally understood
the history wasn’t important
to know the man
all we ever had to do was
listen.

Be savagely thankful, and continuously in awe of the power you possess. You are alive. Inside of an endless cosmos with the freedom that shines brightest in the dark.. Choices.

Your choices belong to you so intimately, that they will never leave you. They, unlike the changing nature of love, where the failing machinery of our bodies will never abandon you to time. Good or bad, they will stay always. An antique that shows the future who you were and what you stood for.

So know that what you choose to stand for, is what will inform you of what you’ve chosen to stand against, so stand. Let each foot crash land into what you believe, and plant them they’re firmly so they may take root in your convictions. And stand.

I think of the beauty in the obvious,
the way it forces us to admit how it exists,
the way it insists on being pointed out like a bloody nose,
or how every time it snows there is always someone around to say, “It’s snowing.”
But the obvious isn’t showing off, it’s only reminding us that time passes,
and that somewhere along the way we grow up.
Not perfect, but up and out.
It teaches us something about time,
that we are all ticking and tocking,
walking the fine line between days and weeks,
as if each second speaks of years,
and each month has years listening to forever but never hearing anything beyond centuries swallowed up by millenniums,
as if time was calculating the sums needed to fill the empty belly of eternity.
We so seldom understand each other.
But if understanding is neither here nor there, and the universe is infinite,
then understand that no matter where we go,
we will always be smack dab in the middle of nowhere.
All we can do is share some piece of ourselves and hope that it’s remembered.
Hope that we meant something to someone.

My chest is a cannon that I have used to take aim and shoot my heart upon this world.
I love the way an uncurled fist becomes a hand again, because when I take notes,
I need it to underline the important parts of you:
happy, sad, lovely.
Battle cry ballistic like a disaster or a lipstick earthquaking and taking out the monuments of all my hollow yesterdays.
We’ll always have the obvious.
It reminds us who, and where we are, it lives like a heart shape,
like a jar that we hand to others and ask, “Can you open this for me?”
We always get the same answer: “Not without breaking it.”
More often than sometimes, I say go for it.

That is all we have on today’s post on Words by Shane L. Koyczan. Did you like what you just read? Let us know in the comment section below. 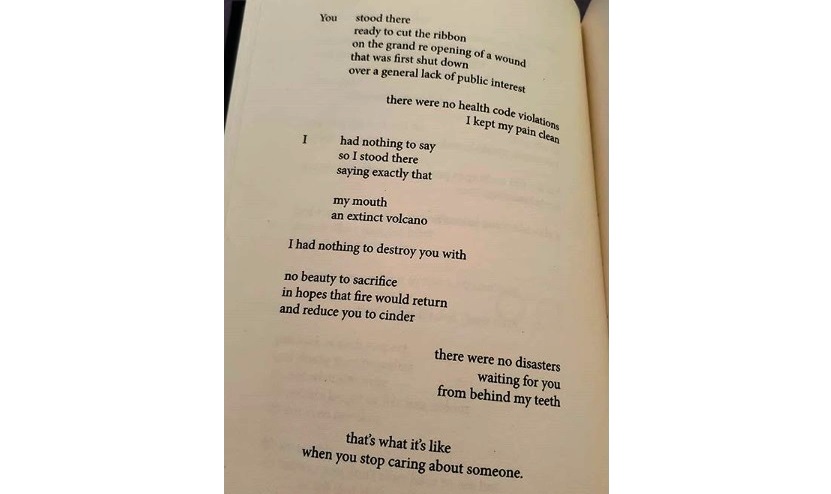