Today’s Book on #50BooksInAYear: The Bad Feminist By Roxane Gay

Bad Feminist by Roxane Gay is a 2014 collection of essays. The collection covers diverse topics from Feminism and Race to Culture and Body Positivity. In the essays, Gay, who is a cultural critic, novelist and professor, explores the grey areas of feminism; she looks into the idea of being a feminist while contradicting some things that are the heart of the ideology. She talks about what it means to be a feminist; what it means to be a human; and how the two come together to form this powerful book. Along this journey of reading 50 Books in A Year, so far this has been my favorite book, and soon you will know why. 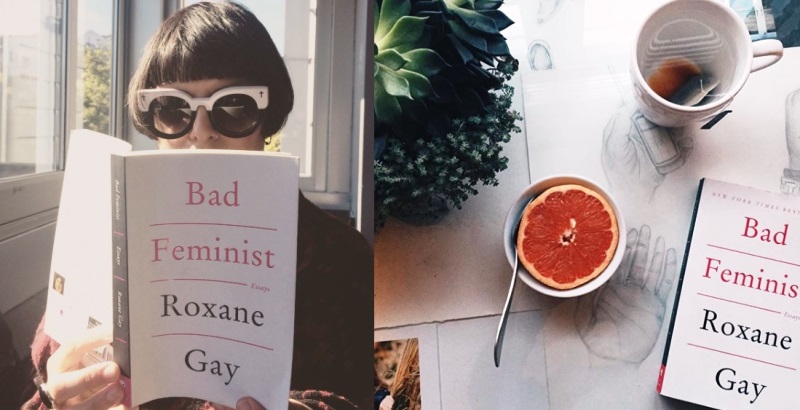 The words you will read in Bad Feminist will break your heart, only to help you emerge stronger in the end. These words are harsh truths that you absolutely need to hear, especially if you have been living in a bubble that assures you the world is changing, and women are being treated as human beings.

The book also addresses the very sensitive topic of sexuality. It talks about womanhood and identity, and the diversity in it. The best thing about the book? I would say that would be, how Gay questions every single thing; I love that about the book.

This book is open, honest, and not hypocritical. Though it is hopeful, it is not sappy at all. What makes the read so interesting is the tinge of humor you see every now and then while flipping through the essays; however, the humor in no way downplays the gravity of the issues it talks about. This is the book that I’d like to gift all my friends and make sure my children read it too.

Since I love this book so much, I will be sharing with you 10 quotes that, according to me, are the best in the book. I could be wrong and might miss out on words that touched you more. If that does happen, then please feel free to share your favorite quotes in the comment section below.

Quotes from the Bad Feminist by Roxane Gay

Changing one’s bad habits is one thing, but changing oneself to fit into boxes designed by the world for you is a different and a horrible thing you could be doing to yourself. Learn to embrace your imperfections because that’s what makes you YOU!

2. On why it is better to be a bad feminist than no feminist at all

“No matter what issues I have with feminism; I am a feminist. I cannot and will not deny the importance and absolute necessity of feminism. Like most people, I am full of contradictions, but I also don’t want to be treated like shit for being a woman. I am a bad feminist. I would rather be a bad feminist than no feminist at all.”

When people nowadays say,” I am not a feminist, I am an equalist”, one couldn’t dumber than that. Just because feminism has feminine in it does not mean it says women are better than men. Feminism, and I hope I am stating this for the last time, is a belief in the social, political and economic EQUALITY of the sexes.

3. On being told that feminists have no sense of humor

“It’s hard not to feel humorless, as a woman and a feminist, to recognize misogyny in so many forms, some great and some small, and know you’re not imagining things. It’s hard to be told to lighten up because if you lighten up any more, you’re going to float the f*ck away. The problem is not that one of these things is happening; it’s that they are all happening, concurrently and constantly.”

“Rape and degradation are just crimes, women! Deal with it, and lighten up!” The next time someone says this, punch in the face, and once he or she regains consciousness, gift them this book.

4. On why it’s important to understand the extent of one’s privilege

This is true in every sphere of life. When we acknowledge our privilege, we understand how we and our experience of the world is different from others. This is how empathy is born.

5. On why women need to prove themselves again and again

“What goes unsaid is that women might be more ambitious and focused because we’ve never had a choice. We’ve had to fight to vote, to work outside the home, to work in environments free of sexual harassment, to attend the universities of our choice, and we’ve also had to prove ourselves over and over.”

If you have not stepped into our shoes, then you have no right to comment on our journeys. Period.

6. On why it’s essential we speak up

“All too often, when we see injustices, both great and small, we think, “That’s terrible, but we do nothing. We say nothing. We let other people fight their own battles. We remain silent because silence is easier. Qui tacet consentire videtur is Latin for ‘Silence gives consent.’ When we say nothing, when we do nothing, we are consenting to these trespasses against us.”

This reminds me of a poem by Martin Niemöller that I ‘d love to share with you all,

“First they came for the Socialists, and I did not speak out—
Because I was not a Socialist.

Then they came for the Jews, and I did not speak out—
Because I was not a Jew.

Then they came for me—and there was no one left to speak for me.”

If this does not move you to speak up, then I don’t know what will!

Suggested read: The Most Inspiring Self-Help Books You Need To Make Your New Year BETTER

7. On why reading and writing is a form of salvation

“I learned a long time ago that life introduces young people to situations they are in no way prepared for, even good girls, lucky girls who want for nothing. Sometimes, when you least expect it, you become the girl in the woods. You lose your name because another one is forced on you. You think you are alone until you find books about girls like you. Salvation is certainly among the reasons I read. Reading and writing have always pulled me out of the darkest experiences in my life. Stories have given me a place in which to lose myself. They have allowed me to remember. They have allowed me to forget. They have allowed me to imagine different endings and better possible worlds.”

Reading has been my catharsis since before I knew what catharsis was! Thank you so much Roxane Gay for beautifully putting this emotion into words.

8. On why women shouldn’t get involved with men who are already taken

9. On why patriarchy is not dead, and so the efforts shouldn’t die too

“Some women being empowered does not prove the patriarchy is dead. It proves that some of us are lucky.”

How on-point is that!?

10. On the worrying case of fairy tales

“The thing about fairy tales is that the princess finds her prince, but there’s usually a price to pay.  A compromise required for happily ever after. The woman in the fairy tale is generally the one who pays the price. This seems to be the nature of sacrifice.”

To explain her point, Gay talks about the Twilight series, and everything wrong with that “love” story. Have a read:

“Consider the Twilight series. The four books are about vampires and werewolves and the sweeping love story between Bella, a young girl, and Edward, an old vampire. Really though the Twilight series is a new kind of fairy tale. Is there anything particularly compelling about Edward Cullen? He sparkles. He’s theoretically attractive, but seems to have only one interest: loving Bella and controlling every decision she makes. We’re supposed to believe his obsessive control and devotion are somehow appealing. We’re supposed to believe he is Prince Charming, albeit flawed because he needs to drive blood to survive. Accepting Edward’s controlling obsession and vampirism is the compromise required of Bella. Eventually becoming a vampire, becoming undead, is the price Bella must pay for her happily-ever-after. We’re supposed to believe she is fine with that because Bella is the one who advocates so fiercely for Edward to turn her into a vampire. We’re supposed to believe Edward is worth that sacrifice.”

That is all we have on today’s post on Bad Feminist by Roxane Gay. Did you like what you just read? Let us know in the comment section below.