12 Reading Resolutions For A Feminist By A Feminist

“I only know that people call me a feminist whenever I express sentiments that differentiate me from a doormat.”
-Rebecca West

Feminism (noun): an advocacy of women’s rights on the basis of the equality of the sexes.

The context of feminism is not particular to the twentieth century. If one looks to the roots, in hunting-gathering societies, women were the gatherers, while men hunted because of their obvious physical prowess. Over the ages, this division has been warped in innumerable ways, so much so, that we grew to perceive women as the weaker sex. Not just physically, but in every other aspect. We did not deserve the right to vote because the brain is a male attribute. We weren’t allowed to follow our “passion”, or pursue any career we wanted, because let’s be honest, what is a woman doing outside a kitchen? Every time we applaud a woman for wearing whatever she wants or pursuing her career after marriage, it baffles me because these are very normal things to do. It puzzles me to wonder where our society went so wrong as to deny an entire sex their right to normalcy.

There are still scores of people who remain confused about what feminism truly is. This feminist reading list, not only helps you understand feminism better, but also (hopefully) inspires you to be a feminist. Because why would you want to be anything else? 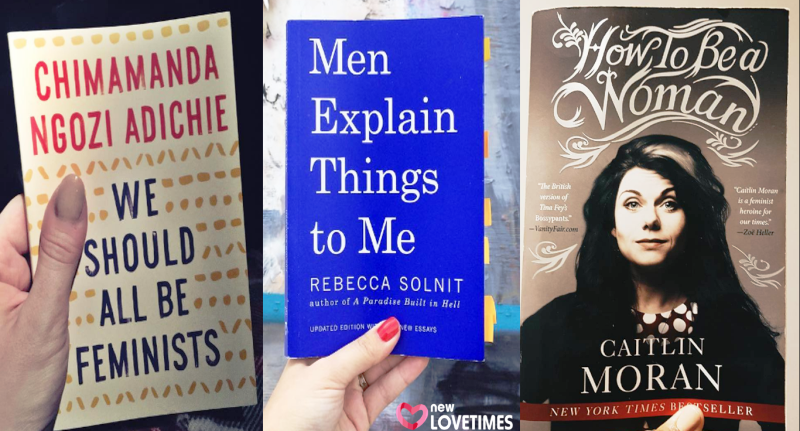 1. ‘Fat Is A Feminist Issue’ by Susie Orbach

A photo posted by Feminist Nutritionist (@feministnutritionist) on Jan 20, 2017 at 8:52am PST

Orbach is an activist and psychotherapist. She founded a global campaign named ‘Endangered Species’, which rises against the trend of body shaming. 9/10 times, when a woman encounters a message from an internet-creep, it asks for her “size”. “Being presentable” has almost been labeled as a woman’s one true goal.

In her book, Orbach traces the negative consequences of the ‘size-zero’ phenomenon. She reveals how several women take to compulsive eating, and ‘unshapely’ bodies, as a sign of protest against patriarchal norms. They embrace obesity because it makes a statement; it tells the world that women refuse to be ‘molded’ by their ideas.

What to do when you have three hours to kill before your flight? Read one of the many books you haven't read, people watch, and take advantage of the free cocktails at the #PriorityPass lounge! What about you? How do you while away the time at the airport waiting for your flight? 😆🍹🛫

This novel, published in 1973, is a daring account of the female sexuality. The first chapter is titled, “En Route to the Congress of Dreams or the Zipless F*ck”. The latter happens to be a recurring motif throughout her novel. It means what modern jargon calls, ‘no strings attached’.

This book speaks loudly against the power dynamics of lovemaking, and therefore against, the subordination of women by it/because of it.

"These days, a plethora of shitty attitudes to women have become diffuse, indistinct, or almost entirely concealed…Because – like racism, anti-Semitism, and homophobia – modern sexism has become cunning. Sly. Codified…a closet misogynist has a vast array of words, comments, phrases, and attitudes that he can employ to subtly put a woman down or disconcert her, but without it being immediately apparent that that is what he is actually doing." 💯 |#howtobeawoman #whatimreading #caitlinmoran

“We need to reclaim the word ‘feminism’. We need the word ‘feminism’ back real bad. When statistics come in saying that only 29% of American women would describe themselves as feminist-and only 42% of British women- I used to think, what do you think feminism IS, ladies? What part of ‘liberation for women’ is not for you? Is it freedom to vote? The right not to be owned by the man you marry? The campaign for equal pay? ‘Vogue’ by Madonna? Jeans? Did all the good shit GET ON YOUR NERVES? Or were you just DRUNK AT THE TIME OF THE SURVEY?”

This novel is a movement in itself, and by the end of it you’re either a feminist or a pile of dust, because all that sass burnt you.

4. ‘The Wife Drought’ by Annabel Crabb

Next up, The Wife Drought. I have started this book previously but got distracted… #sewbrunswickreads #bookclub #annabelcrabb #thewifedrought

The cover reads: “Why women need wives, and men need lives.” In this novel, Crabb speaks about how women who handle household chores, as well as office work, need wives too. It sarcastically equates ‘wives’ with ‘paid housework’ or ‘crèches’, basically anything that reduces your burden. This piece of work goes beyond the demand of equal pay for equal work, to ponder over how women are beginning to work outside, but men aren’t encouraged to work at home and share household chores.

“Now you understand
Just why my head’s not bowed…
…When you see my passing,
It ought to make you proud…
…’Cos I’m a woman
Phenomenally.”

This woman is an inspiration. Being a proud African-American woman in the United States, she set an example for what it means to stand your ground. Her ‘Phenomenal Woman’, makes you feel like one.

Suggested read: 8 children’s books you should bring home to read to your daughter

6. ‘Men Explain Things To Me’ by Rebecca Solnit

Incredibly eye opening for both genders, and really demonstrates what it's like to be a woman and exist in a world that is constantly silencing you, constantly attempting to claim ownership over you, and demeans your existence. (*trigger warning* sexual assault/rape/murder) #menexplainthingstome #feminism #educateyourself #rebeccasolnit

This novel hits home on the annoyance of ‘mansplaining’.

“(In the context of her previous novel Wanderlust) On two occasions around that time, I objected to the behavior of a man, only to be told that the incidents hadn’t happened at all as I said, that I was subjective, delusional, overwrought, dishonest- in a nutshell, female.”

It never fails to baffle me how an entire gender can be barred from having something as natural as an opinion.

Amy Poehler, a plethora of things, including director, actress, voice artist, etc, is most famously known as a comedian. She makes being alive sound like a lot of fun. The novel’s three sections are headlined “Say Whatever You Want”, “Do Whatever You Like”, and “Be Whoever You Are.” Her book inspires you to be the badass you always wanted yourself to be.

8. ‘We Should All Be Feminists’ by Chimamanda Ngozi Adichie

The perfect read for a short flight. #weshouldallbefeminists

“Some people ask: ‘Why the word feminist? Why not just say you are a believer in human rights, or something like that?’ Because that would be…a way of pretending that it was not women who have, for centuries, been excluded. It would be a way of denying that the problem of gender targets women.”

Adichie is a force to reckon with, and this novel tells you why. It is possibly the feminist’s Bible, and is immensely empowering for every woman who has been subject to society’s prejudices.

#DiverseAThon Book 2: "It was in English class, through I Know Why The Caged Bird Sings and The Color Purple…I had never read stories about people who looked like me, about girls who had been touched and told to be quiet about it." #diversitymatters ——————————————–#diversebooks #janetmock #redefiningrealness #booktube #currentlyreading #reading #books #bookstagram #read

In this book, Mock narrates her personal experience of growing up poor, multiracial, and trans in America. She offers a deep insight into what it’s like to be a part of marginalized and misunderstood population; one that exploits and ridicules your vulnerabilities, and reminds you everyday, that you are different. This New York Times bestseller relays a powerhouse on her journey to discover and take a stand for herself. It preaches unapologetic acceptance of who you are, and the courage to move ahead despite all odds.

It is a graphic memoir by the American cartoonist. She is popularly known for the Bechdel test: In a work of fiction, do two female characters speak of anything not related to a man? If yes, only then does a book pass.

Her novel deeply deals with themes of sexual orientation, gender roles, suicide, emotional abuse, and a discordant family. It effectively reveals the underbelly of society and its attitude towards anything slightly differing from established standards of “normalcy”, even within the domestic sphere.

11. ‘The Millennium Trilogy’ by Stieg Larsson

This is my favorite in the feminist reading list. The protagonist Lisbeth Salander, has become iconic ever since the publishing of the first book (The Girl With The Dragon Tattoo), in August 2005. She lives a life of her own accord, dresses distinctly, different from what passes as ‘sober’ or ‘normal’, works in silence, and is one of the most bodacious detectives, fiction has ever had the fortune of creating. She takes no nonsense even from the ones she loves, and is a brilliant example of living life with your head never bowed.

Suggested read:15 must-read motivational books for women, by Women, that are truly inspiring

As an adult, when you go back and re-read certain books you read as a child, you suddenly see it in a new light. While Matilda is considered to be Children’s Literature, it holds gravity for every single woman. Matilda defied her obnoxious and torturing family to drown in the world of books. This reminds me of Malala Yousufzai, and her struggle to help fellow women receive education. It makes me very proud to imagine that Dahl intelligently snuck this anecdote into the world of children to help them understand very early in life that there is nothing greater than creating your own identity.

We hope this feminist reading list brings you closer to what every one of us should be: human.

Article Name
12 Books You Need, To Pen Down Your Feminist Reading List For 2017
Author
Meghalee Mitra
Description
This feminist reading list, was made with a motive to help you understand feminism better, & inspires you to be a feminist. Because why would you want to be anything else?