Stop Faking Your Big O Because If You Fake It, You Will Never Make It

Most women can relate to the experience of faking a climax during sex not to disappoint their lovers. Remember the Seinfeld episode, “The Mango”, where Elaine actually admitted to fake a climax when she had had sex with Jerry? Remember her going, “Fake, fake, fake, fake”? Well, that was an award-winning episode, an episode which is Seinfeld’s most popular one, and you know why it is so popular? It is because most women can relate to that.

Fake it till you make it, women have adhered to this principle, in bed because of a number of reasons, one being that the society we live in “doesn’t believe” in the idea of female sexuality. *Trying not to pull out a gun* Ironically, this is also one of the many reasons why women should stop faking it!

Claire Salisbury and William Fisher, psychiatrists from the Western University, say that while 90 per cent of men experience climax while having sex, only 70 per cent of women have a climax. Also younger women are less likely to climax as compared to older women. Apparently, only with time, women and their lovers work out how to stimulate a climax.

This information poses a dilemma for women who have grown up watching depictions of heterosexual intercourse where there is an emphasis on how important the big O is for both men and women and how it isn’t something very hard to reach at. In many movies and TV soaps, you will see that women climax without any foreplay and this forces women to do nothing but, “Fake, fake, fake, fake”!

Both the psychiatrists from the Western University formed focus groups, small in size, and consisting of undergraduate women and men. The groups, separated by gender, were asked to talk about their experiences of sex and their beliefs regarding the same. A lot of qualitative data was produced and when Salisbury and Fisher began analyzing this data they found five themes that were most prominent.

Suggested read: Why Foreplay Is Important For An Active Sex Life

1. Women need to psychologically prepare themselves to have a climax

The focus group that consisted of female members believed that while physical stimulation was the man’s job, it was the responsibility of the woman to psychologically stimulate herself to have a climax.

Now we can go on debating this physical vs psychological responsibility idea, but because of this when a woman does not achieve the big O she is thought to have not focused enough or not been receptive to her man’s actions. This is read as the woman not being emotionally committed to the man. And so, she fakes it.

2. A woman does not need to have a climax to be sexually satisfied during intercourse

Wait, come again? Women believe this cr*p? As it turns out, they do. They think when a man and a woman make love, the man’s satisfaction determines whether or not the encounter was a success. If the woman feels satisfied as well, then it is a “bonus”! One of the participants even went ahead to spell it out. She said that a climax is an icing on the cake!

3. During sex, (much like in life), women need to boost men’s ego

Wh-a-a-a-t!? C’mon, girls! This is also funny in a way because though a woman should be deriving more pleasure from her own climax, women think that the climax means more to a man’s ego. If and when a woman does not climax, she is hurting the man’s ego. A participant said, “Sometimes you have to [fake the big O] because you’re going to upset the person.”

4. Women tend to value a man’s pleasure more than their own

The women in the focus group believed that hurting their partner’s ego by desiring to be stimulated will be judged by the man. This, they believe, can have devastating consequences on the man’s self-esteem. So they are willing to go through several episodes of sex where they feel zero stimulation, and just fake it so that the man does not start thinking less of himself!

5. Women believe that in a causal encounter it is perfectly fine to fake a climax

In a casual relationship, women this sexuality comes above communication and so fake their climax without realizing that the very reason they are in this relationship is not being satisfied! But they do not want to communicate that to their partners.

For this study, we can come to a conclusion of sorts that women usually fake a climax to not hurt their partner’s sentiments, ego and to also not hurt the relationship. But Salisbury and Fisher in their study have also stated that for a healthier relationship, women need to stop faking it. They need to communicate their desires and help their partners to work out how to stimulate a climax. Only then will they actually come close and their bond will be stronger.

Now let us find out why the “fake it till you make it” principle leads to unhealthy relationships. We will give you 4 solid reasons.

Faking till you make it works for a number of things, but believe it or not, sex is not one of those things! Using this tactic can have serious complications both inside and outside the bedroom. One of these consequences is that faking a climax makes reaching a real “O” even harder. According to Gracie, who is a sex therapist from New York City,

“Faking leads to a disconnect with your bodily sensations and perceptions. And that disconnect can make a climax more difficult to achieve since you need to focus and be present in order to climax.”

2. You are mostly likely to feel disconnected from your lover

Reaching the climax not just brings physical pleasure, but also makes you feel mentally more connected to your partner. According to a study published a couple of years ago in the Communication Monographs journal, couples who actually climaxed can communicate their feelings better to their partners later during the pillow talk. This could be because when you actually experience the big O, there is an increase in the production of oxytocin or the love hormone. This hormone helps you connect on a deeper level with your partner.

3. If your partner finds out before you tell him, then it will be difficult for him to trust you

He will obviously not say this to you, but according to Landes, “many people can sense when their partner is faking it.” If you tell them directly, they will feel like you trust them and want to help them love you better.

4. You never know, but your partner might be faking it too!

According to a study that was published in the Sexual and Relationship Therapy journal, last year, women are not the only ones who fake a climax. 25 per cent of the time, men do the dame. And their reason for doing that is similar to your reason: Do not want to hurt the partner’s sentiments.

So, the policy of “fake it till you make it”, does not work in this case because you will never make it that way.

How can one stop faking it?

“Slowly start acting more authentically so it doesn’t come out of left field to your partner. It’s okay to say you want to stop. That gives you the ability to talk about sex, negotiate what you want, and give both of you some realistic expectations.”

And if all these reasons are not good enough to motivate you to stop faking a climax, then consider this: Lindsay Brown of the Coveteur says,

“Finally, if the prospect of a real org*sm isn’t enough to get you to stop faking it, at the very least, consider the rest of us! Rampant org*sm faking has created a population of men who are completely clueless as to what is required in order to get women off. Think about it: every time you fake it, you are basically handing out the sexual equivalent of a gold medal to a dude who only earned himself a participation ribbon.

There are already too many guys running around mistakenly thinking they are Olympians. So I beg of you: cut it out. Otherwise I fear a dire future is ahead—one filled with sexually unsatisfied old ladies, gathered together at a deli, optimistically ordering twenty-dollar pastrami sandwiches.”

That is a wrap on today’s post. Did you find this useful? Do you think women should stop faking orgasms? Or are you of the opinion that they should not because it can hurt the sentiments(ego?) of their partners? Let us know in the comment section.

See you again tomorrow with a new post on love and relationships.

You can also sign up for our newsletter to receive their posts in your inbox daily. Ciao! 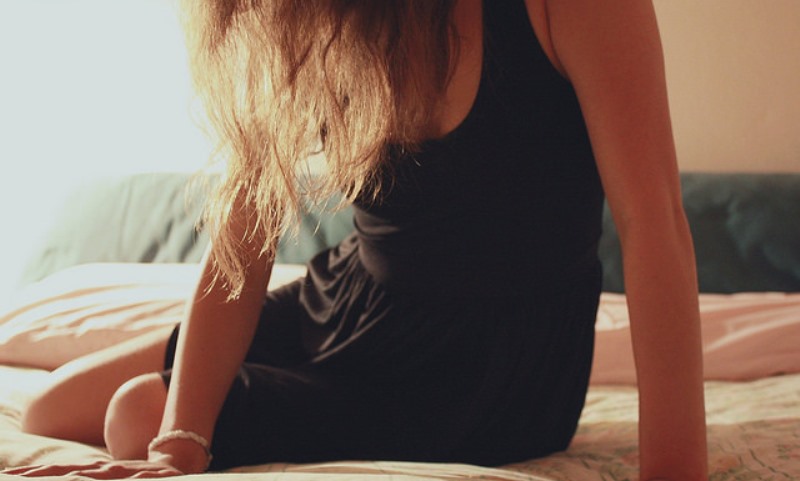 Article Name
Why Fake It Till You Make It Does Not Work When It Comes To Climaxing
Author
Ruth Russell
Description
Fake it till you make it, women have adhered to this principle in bed because of a number of reasons. But what they don't realize is that it does not work!