Saturday Night Live is a late-night American comedy show based on sketches. They are performed by only the most talented artists, and keep you rolling on the floor with laughter. The brilliance of SNL lies in the fact that it does not cater to slapstick comedy. Most of their dialogues work through hyperbolic depictions of reality, serving, ultimately, as a commentary on the same. It debuted in 1975, as NBC’s ‘Saturday Night’. I thank God every day for never taking this show off air.

Here is a list of the best Saturday Night Live episodes, according to me:

Teachers are strange creatures. I am not making a value judgment here. The statement that teachers belong to a different species, holds no doubt. In this particular SNL episode, the teacher constantly gets the names of the students wrong. If you have been one of the kids with ‘unconventional’ names, then I am sure some teacher must have messed up during Roll Call. I, for one, have had my name distorted to ‘Meghbaali’, ‘Meglee’, ‘Meghalaya’, ‘Meghobala’, et cetera.

The brilliance of this sketch unfolds in 3 stages: a) Keegan-Michael Key’s face (which is a comedy set in itself), b) the ludicrous exaggeration of the names, c) the fact that the names he chose to distort where actually the most common and easy to pronounce. Watch the skit for a trip down memory lane, coupled with a lot of laughter.

Have you ever been worried of going out of fashion? I mean, I know that is only something celebrities worry about. But say, if you were Salma Hayek, then you would want to know if you are still popular, right? (Just kidding. Salma Hayek does not need your validation.)

In this skit, Chris Hemsworth (yes, Odinson) crashes a “brunch” where 4 female friends are discussing their celebrity crushes. He masquerades as their friend Claire, complete with a blond wig and a rather hideous dress. Yes, Thor Odinson, ‘Chrissy Hemmy’, the Lord of Thunder, seeking validation. Watch the sketch and marvel at those beautiful white teeth.

P.S: Next time you want to be narcissistic, do it. None of us are beyond it.

If the name itself isn’t a tell-all, then you need to take a step back and ask yourself, “Am I really binging on the right shows?” This SNL sketch is a parody of the famous 90s sitcom F.R.I.E.N.D.S. Every character has a certain stereotype, or a behavioral pattern. Some people talk fast, some have droopy eyes, some have a shrill pitch, et all.

The actors in the skit embody and exaggerate the stereotypes of Ross, Rachel, Monica, Phoebe, Chandler, and Joey. Or, at least, they try to. The fun part is, Mathew Perry, who played the role of Chandler in the original sitcom, is playing the character of his best friend Joey, in the SNL sketch. To the F.R.I.E.N.D.S. fandom, this is an absolute treat.

I know what you are thinking- “Why is this even a question? Have you seen him?” I know, right? But what if Benedict Cumberbatch was a contestant on this game, too? You can always trust Saturday Night Live to come up with the quirkiest of content. Imagine the son of God standing in front of you, with angels flying out of his back, and a warm halo descending on his head. How on earth do you tell him why he is the most perfect snowflake?

Throughout the sketch, Cumberbatch (or, Cabbagepatch) is clearly uncomfortable. Even in real-life interviews, the man turns bright red when shown thirst tweets. Somebody once tweeted at him saying his face looks like it had an allergic reaction to bad shrimp. The disgrace?!

The women in the game-show fumble, stutter, but deliver the best replies. Watch the skit and see if their reasons match yours?

When you see the view count on this one, remember that I constitute one million of those. This is hands-down my favorite Saturday Night Live sketch.

The premise is that a spaceship had abducted three citizens. Once they are returned, the government rounds them up for questioning. So, there is an interview panel with Aidy Brynt, and Mikey Day. The three people abducted were Kate McKinnon, Ryan Gosling, and Cecily Strong. Once the questioning begins, we realize that Kate has had an experience that is markedly, and quite shockingly, different from the other two. While they were shown the intricacies of the Universe, Kate was pooped out of the spaceship with her trousers thrown separately, 3kms apart.

This is one of Kate McKinnon’s best performances. It is so hilarious, that Aidy, Ryan, and Kate are often led to break character. Gosling just starts laughing at one point, with his head lowered, while Cecily passes off his visible shaking as him grieving Kate’s misfortune.

Watch this one. You deserve the laugh.

It has Sofia Vergara and Kate Mckinnon. I’m just grateful that the set did not catch fire, or that the director could focus hard enough to actually get the project done. They are two of the funniest women I have watched on screen.

In this sketch, they make a parody of the usual shampoo commercial that speak about beneficial chemical compounds as though anybody understands any of it. Pulling it way out of proportion, the ‘complex words’ are taken to a point where it just does not make sense even to an expert. Coupled with the classic ‘hair-flying’ scenes, and unnecessary sexualized nature of the product, SNL has hit home with this one.

Ever thought of the impracticalities of fairy tale tropes merging with the real life? No? Well, luckily for you, Saturday Night Live has. This sketch is set in the infamous song- ‘A Whole New World’. Aladdin and Jasmine are on the flying carpet, flying through a “dazzling space” they never knew, deeply in love with each other.

The duet is magical, but as is the usual drill with SNL, you always have a feeling of foreboding. A giant bird smashes into Jasmine’s face, in the middle of her singing. So, some of the feathers also make their way into her mouth, along with the fish that that bird was carrying. Nonchalantly, Aladdin continues to sing, and Jasmine joins again. This time, an airplane empties its toilet waste on her head. The script is brilliantly precise and succinct. The hazards that fantasy does not speak of, has been brought to the forefront. Watch this episode for a new perspective on the real-life/fantasy discord.

The rivalry between Trump and Clinton is nothing new. Unless you have been living under a rock for the last couple of years, you know that these two Presidential candidates for the U.S White House, have been at loggerheads for as long as one can remember. While Trump publicly decries Clinton, the latter does it with a tad bit of class.

Kate McKinnon’s impersonation of Hillary Clinton is as flawless as it gets. Alec Baldwin as Donald Trump is the stuff of dreams. One can quite easily forget that we are watching a scripted comedy sketch, and not the actual Trump on a podium (which says quite a lot about his Presidency). Watch it for the light-hearted version of a debate that tore America wide open.

This is one of the best Saturday Night Live episodes in history. In a time when the #MeToo movement has shaken the industry out of its comfort zone, SNL lands with the perfect commentary on gender-bias in the work place.

In the sketch, Cecelia Prince (played by Sasheer Zamata) is moderating a panel on Women In Film. It has Emma Stone, Leslie Jones, Jennifer Aninston, and Debette Goldry (played by Kate McKinnon). As questions about work environment and camaraderie are bounced off the actresses, Goldry, who belongs to a much earlier era of Hollywood, is shocked at the amount of human decency granted to the present-day actresses.

The Hunger Games trilogy, written by Suzanne Collins, is a wonderful dystopian fiction about how poverty and Capitalism can throw all of us into a bottomless pit of unethical survival. This was adapted into a motion picture, starring Jennifer Lawrence, Liam Hemsworth, et all. Katniss Everdeen, and Peeta, survive the Hunger Games. It is the first time in this history of the game show that there have been two survivors.

In the sketch, the duo are brought into a press conference soon after their tryst with the game. What follows is a panel of journalists shooting insensibly hilarious questions, which is quite bathetic to the usual grim atmosphere associated with a murder-oriented game.

Have you ever imagined a chicken in outer space? If you have, then what is wrong with you?

In this sketch, all the people on board are fighting over the dangerous route that the spaceship is taking. Everybody but one person of the mother-ship disagrees with the unanimous consensus of changing course. That is their Captain. Chris Hemsworth, despite having better sense, will not budge from his position because he owes his complete loyalty to the Captain. It is peak-absurd when you we find out that the Captain is actually a chicken.

Watch this sketch for the absurd space fantasy, brilliant acting skills of the animal, and Chris Hemsworth completely breaking character.

Adele cures everything. You could be a 10-year-old with no history of heartbreak, or a 40-year-old lamenting the loss of your toolbox, Adele delivers catharsis for every kind of pain.

In this sketch, a table has been set for Thanksgiving. The family has gathered together, but their views bounce off each other, leaving rash dents. Whenever the conversation begins to descend into chaos (read: homophobia, transphobia, racism, et all), the young child hits the music player. Immediately the whole scene in transformed into an Adele music video.

Come to think of it, this technique could actually save a lot of families.

To me, these are the best Saturday Night Live episodes. I hope they bring you as much mirth, laughter, and utter confusion, as they always have, to me. 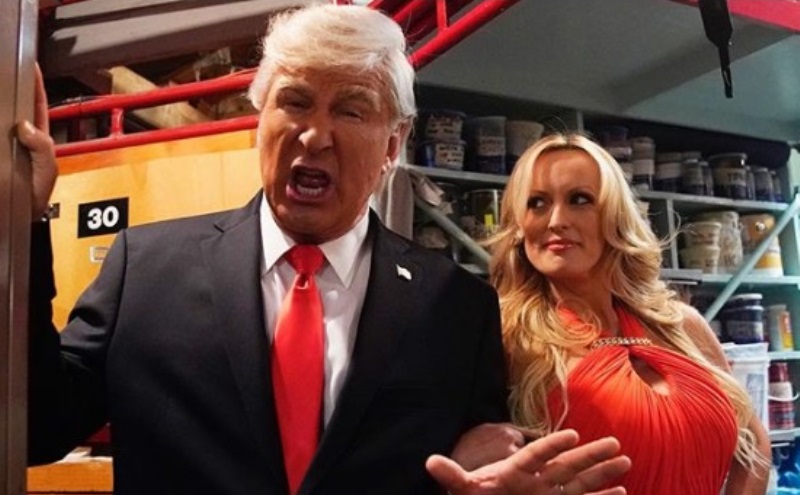