When It Comes To Being Badass, Nobody Does It Better Than Frida Kahlo!

The iconic unibrow. Ostentatious tropical flowers in her hair. Cigarette in hand. A clandestine stare.

If you are on trend with pop culture, then you definitely must have heard of Frida Kahlo. There are pictures of her everywhere, her paintings sell for millions and millions of dollars, people everywhere still dress up as her on Halloween and sometimes for no reason at all. So, who is Frida Kahlo? Literally speaking, she was a Mexican painter and artist who was born in 1907. She made a lot of self-portraits, lived a horrifyingly unfortunate life, and died at the age of 47 in 1954. But the real question is- why is Frida Kahlo famous?

Suggested read: For All Women: 10 Powerful Lessons From The Life Of Frida Kahlo

For a Latin-American painter who lived several years before this generation was even born, she is an incredibly relevant figure in today’s world. She is featured in magazines and publications, and her works are considered some of the most sought after pieces ever. So why does she appeal to the youth so much? What about her is so intriguing that people today behave as though she were alive and constantly doing great things. Why is she so widely spoken about, revered and emulated?

Today, not only do we ask why is Frida Kahlo famous, but also show you what an incredibly talented, progressive badass woman Kahlo was, which makes her such a cultural icon even today.

1. She did not believe in gender stereotypes

One of the most iconic pictures of Kahlo is a picture of her with the rest of her family; she is wearing a full “men’s” suit in a photo where the rest of the women in her family are wearing skirts. In a day and age when gender roles were in place and patriarchy was considered normal, she chose to redefine what femininity and womanhood meant, by doing whatever the hell she wanted to.

Not only did she dress in clothes that traditionally men wore, but also competed with them in tequila drinking competitions (and won), smoked openly and constantly, and didn’t alter her looks in any way, and chose to highlight “flaws” like her unibrow and upper lip hair. However, she was also very brazen about her femininity, which she chose to display through her flamboyant clothes, unconventional jewelry and flowers.

2. She was openly bisexual

Not only was bisexuality, or alternate sexuality considered “abnormal” and “taboo”, but it was highly scandalous for a woman to experiment with her sexuality. In fact, back then it was scandalous for women to do practically anything at all. Of course, these were restrictions that did not affect Frida Kahlo in the least, for she was openly bisexual, and had many female lovers during the course of her life.

This is one of the more iconic pictures of Frida with one of her lovers- Chavela Vargas. She had also courted Josephine Baker, the famous painter Georgia O’ Keefe, Paulette Goddard, Dolored del Rio, etc.

3. She went through hell, but didn’t abandon her art

Like I mentioned before, Frida Kahlo’s life was anything but easy. Even though she looks graceful and elegant in all of her pictures, she was in literal physical pain almost throughout her life. At the age of 9, she survived a massive bout of polio which left her permanently deformed. When she was eighteen years old, she was in a bus accident where she was impaled in the pelvis with a metal rod.

Suggested read: Our Top Picks For The Greatest Love Letters In History

This left her bedridden for a long while, and without the ability to bear children. She spent over 9 months in hospital. Most of her paintings are self-portraits because she used herself as a muse and model, by installing a mirror on the ceiling above her bed. Right before she died, her leg had to be amputated, but till her last breath, she remained true to her art.

4. She was unapologetic and fierce in all things she did

When you have a look at the hardships that Frida Kahlo had to deal with during the course of her life, you might come to the conclusion that the universe deigned her to be the victim of her circumstance. She was born unfortunate, meant to be broken, destined to be defeated.

However, when you look at the incredible legacy that she left behind, you will see that she used her circumstance to create something beautiful. She didn’t shy away from her disability, and literally and figuratively, laid herself bare in all her beauty and all her ugliness for the world to marvel at. Kahlo was a personality whose fierceness and ferocity not only set her own life slight but also continues to inspire generations of people born after her death.

5. She kept exotic animals as pets

If you need some inspiration to embrace your weirdness without inhibition, then take a leaf out of the wonderfully colorful book that was Frida Kahlo’s life. She was not only “weird” in the sense that she defied every single orthodox social norm that was prevalent during the time, but also because she lived her life on her own terms in all its weirdness. One of her quirks was her fondness for exotic pets.

She had two monkeys called Fulang Chang and Caimito de Guayabal. She also had an Amazon parrot called Benito. There is a famous picture of her with her pet fawn- Granizo. She also housed a number of hairless Mexican ixquintle, which are dogs whose lineage can be traced back to the Aztecs. Along with macaws, parakeets, sparrows, chickens, and hens, she also had a majestic eagle by the name of Gertrudis Caca Blance, which translates to “Gertrude White Shit.”

6. She said the most wonderful things

Here are a couple of earth-shattering things that Kahlo wrote in her diary during the course of her life.

I tried to drown my sorrows, but the bastards learned how to swim, and now I am overwhelmed by this decent and good feeling.

Pain, pleasure and death are no more than a process for existence. The revolutionary struggle in this process is a doorway open to intelligence.

7. She had no secrets

A lot of painters tend to have an air of mystery about them, in order to add an element of vagueness and intrigue to their art. Frida Kahlo defied the stereotype on that account as well, because she was literally an open book. She recorded all her thoughts and fears and insecurities in her diary, which was published, and despite her style being predominantly surrealist, she claims that she painted only her “reality.”

Whether it was through speech, nudity or art, her candor remained a constant part of her identity. She was so unapologetically herself, that even now, we feel privileged to get such an intimate insight into the life of such an incredible personality.

8. Her relationship with her husband Diego Rivera is the stuff of legends

There have been two great accidents in my life. One was the train the other was Diego. Diego was by far the worst.

Diego Rivera, who is also one of the most renowned painters, was 20 years Kahlo’s senior when they met and married. It was after their marriage that she began developing her art and dressing like art herself. They had a tough and tumultuous marriage, divorcing and then re-marrying again. They both had numerous affairs, although her paintings express that she was deeply wounded by his philandering ways.

Some critics are of the opinion that Kahlo in her art tried to portray herself as a strong, unaffected woman, which she used as a defense mechanism to protect herself from emotional vulnerability. However, there is no denying that the companionship of Kahlo and Rivera inspired some of the greatest artworks in history from both the people involved.

No matter how much you write, you can’t do justice to the badass icon that Kahlo was. It is normal for you to wonder why is Frida Kahlo famous. After all, thousands of painters have existed in history. Why did Vogue magazine decide to feature Kahlo on their cover, so many years after her death? Perhaps she truly was made of magic. Perhaps something about her raw candor and brutal defiance resonates with who we are today. We can only hope to find out one day, and in the meantime, continue to celebrate the legend that was Frida Kahlo. 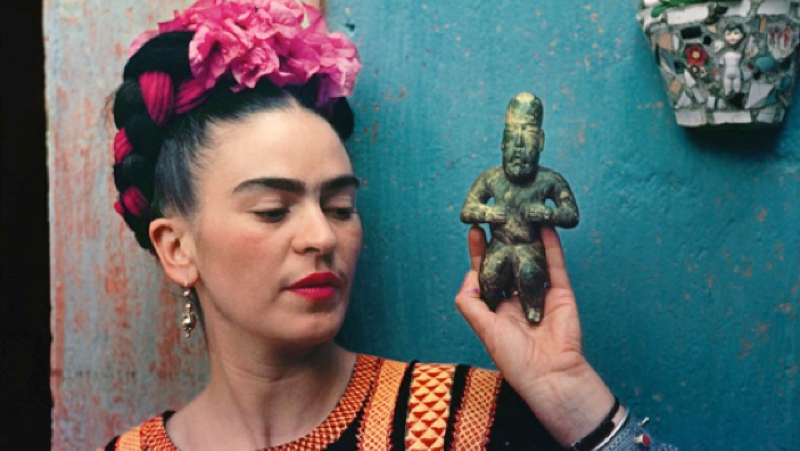 Article Name
Why Is Frida Kahlo Famous? Find Out Here!
Author
Aishani Laha
Description
We have all heard, seen, and maybe even dressed up like Frida Kahlo, who is a cultural icon. But why is Frida Kahlo famous in today's day and age?