The general belief about couples who have been together for a long time is that they get so close to each other and been through so many ups and downs together, that they become well aware of each other’s general reactions towards various occurrences. Silence between them starts to become a comfortable one and they seem to be able to communicate with each other without speaking. Couples begin to live in a pretty little world of their own, one that becomes their very personal private bubble.

But there is more to a couple that is going steady than what meets the eye! You will understand this better if you yourself have been or currently are in a long term relationship. When away from public eye, couples tend to develop some special idiosyncrasies that come from having grown to be so amazingly comfortable in each other’s company. They develop weird habits that differentiate them from other people and strengthen their bond as a special unit.

Suggested read: 15 ways healthy couples understand each other without words

Couples have a secret language of their own. This may seem awkward to the people in the presence of the couple, but it isn’t very unnatural for them to be speaking in shorthand. They have secret hand gestures or nods and smiles that mean more than what they apparently do.

Couples tend to give each other the weirdest nicknames. When you have dated each other for a while, you start calling each other by strange names. These nicknames may not even have anything to do with your real names. They are not shortened versions of your first name, like the kind of name that your friends and family members give you. Instead, the names they give each other are ones that are romantic and cute. They call each other by these names mostly when they are in private, because most of these names have no literal meaning at all.

Couples literally love to tickle each other’s literal funny bones. This is a weird, yet cute, habit that most couples have. They love to tickle each other for the oddest reasons. They use tickling when trying to cheer each other up, to make up for a fight in a humorous way, and sometimes even as a bit of foreplay. And guess what! The tickling trick works miracles on couples that have been with each other for a long time and know just where to tickle in order to get the needed response. Funnier still, people seem to love getting tickled by their partner. Heck, who in this stressful world wouldn’t want a reason to laugh a little?

4. Texting, while in the same room

They text nonsensical things to each other from across the room. This does sound strange. What is the point of texting someone who is in the same room as you, or probably just the next room? Why not just holler to them and convey your message or go talk to them in person? But no, long term couples have a very different way of communicating, it seems. They randomly text each other even if they are both at home but in different rooms, and also if they are in the same room. Sometimes, one person just texts the other to pass the pizza to them. 😛

They take very weird selfies, or should we say, relfies (relationship selfies, and yes, they are an actual thing; I’m not making it up!). When they are with each other, couples love spending time taking pictures of each other and also sometimes take selfies of them as a couple. These pictures include photos that are taken upside down or videos of them doing the most random and ordinary things. These pictures are actually the best expression of their true selves as they are extremely comfortable in each other’s presence and don’t hesitate from posing in their most natural manner.

Suggested read: 10 awesome reasons why Monica and Chandler will be the best TV couple

Couples tend to finish each other’s sentences. When you have been in a long term relationship, you become acutely aware of your partner’s thinking process, ideas, and behavior. Couples may even be able to predict exactly what the other person is thinking. After having spent so much time with each other, they are expertly able to finish their partner’s sentence. Talk about love that is telepathic in nature!

Talk about multitasking! When couples have been together for a while and are in a steady relationship, then it becomes important for them to plan things together. It’s important for couples to plan their daily activities together, such as getting ready for work or preparing their kids for school. What better time to talk about all this than in the morning, while everyone’s still at home? And mornings are the most hectic time of the day. Yet it is not a surprising sight to see most couples talking with toothbrushes in their mouths, discussing agendas, shopping lists, duties and so on. For an outsider, it may all seem like gurgling noises, but couples understand each other just fine, considering all the practice that they have gotten in all the years of being together and listening to the ‘toothbrush in mouth’ speech.

Couples often do their laundry checks. This may even seem repulsive to all those who haven’t experienced this level of love and closeness, but for couples who have been together for a long time it is no big deal to sniff their partner’s clothes every now and then. No, not those freshly washed ones, the ones that are worn and have the unique smell of their beloved partner still lingering on them. Talk about weird things couples do! People do like to take a whiff of their partner’s smell, just as long as it is not unbearably gross. 😉

Couples study each other’s moles and every little physical growth. When you have been intimate with that special person and have grown familiar with every inch of their skin, then it becomes a common habit for you to study them physically. However, the weird part is when you become fixated on the growth of a certain mole, or just casually inspecting your partner’s face for no reason. This is one the many funny things couples do.

They fart and burp in each other’s presence. When couples are extremely close, then this is something that they end up doing. Without even the slightest sense of shame or regret, they fart or burp in front of each other when they feel like it. They share a few laughs and probably tease each other, but that’s about it. Couples at this stage, reach a point when they hardly feel affected by each other’s bodily functions.

They have at one point or the other tried on their partner’s clothes. This is something couples love to do, especially when they have spent a lot of time together. Girls especially will like to borrow their boyfriend’s larger sweatshirts to be comfortable, and guys might joke around with their girlfriend by trying to fit into something of hers.

Suggested read: 15 subtle ways guys say ‘I love you’ without actually saying it

Weirdness comes in different measures. The weirdness that is seen between couples who have spent a reasonable period of time of their lives with each other is actually adorable and a very positive sign of the love and harmony that exists between them. Which of these adorable quirks do you and your partner share? Tell us in the comments below! 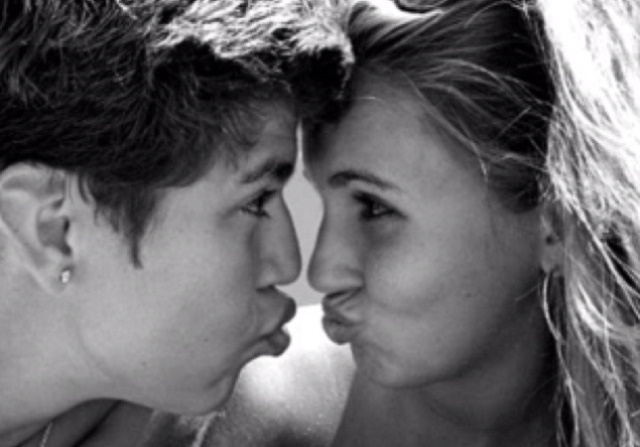 Article Name
12 Incredibly Weird Things Couples Do
Author
Suraiya Islam
Description
Couples who have been together for a long time, have developed their own quirks and idiosyncrasies. Take a look at some of the weird things couples do.