21 North West Outfits That Are Fashion Goals For Most Adults

North West, a.k.a. child of possibly the two most famous people in the world, that is Kim Kardashian and Kanye West, and also elder sister to Saint West, is a fashion icon at age 4, with some of the greatest North West outfits we have seen. While most normal four year old wore shirts with Barney the dinosaurs face on them, North West has garnered the envy of millions of fully adult people all over the world with her overwhelming wardrobe.

Suggested read: How To Copy Kim Kardashian’s Beauty Routine With ALL Drugstore Products

Even though it is safe to say that it is her mum and dad who pick out her clothes for her, we can’t deny that this little girl rocks her Givenchy, Versace and Alexander Wang outfits like no other. Her mum just launched her contour sticks from KKW Beauty and all her aunts and her entire family is super (in)famous, but amongst all this media hype and publicity circus, North West has held her own. Here are 21 of her best fashion moments, in the four years that she has graced us with her presence in this world.

While most kids would look super cute in their ballet costumes and little tutus, it is important to keep in mind that North West is not most kids. She is the daughter if Kim Kardashian, and therefore must wear a jeweled choked and oversized pink fur coat on her way to a ballet class. Also, it is important to mention that she looks like a real life princess, and as a 22-year old, I want to wear that.

North West attended church with her aunt- Kourtney Kardashian wearing this super gorgeous velvet dress, with lace-up details. Oh, not to mention, the dress which was custom made, and worn with matching sneakers also had the names of her parents- a.k.a. Kim and Kanye- airbrushed on the back portion of the dress, no big deal.

While North was out with her super stylish mum, she definitely made her own style statement. Most adults wouldn’t be able to rock a pair of silk and lace shorts with an oversized denim jacket, which also not-very-coincidentally has her initial embossed on the chest pocket.

4. North West in a tutu look

Even though North West doesn’t seem to particularly enjoy her ballet lessons, she definitely knows how to look like a professional dresser with her outfits. This tulle with the camo jacket is fashion of the future, people; sort of what I imagined a badass Tinker Bell to look like.

If you thought the tutu looks were over, that smirk was back to wow us all, along with that on-point outfit of course. Inspired by Yeezy, a.k.a her father, Kanye’s fashion label, North manages to look like she is some sort of fashion princess in an outfit that I am pretty sure a normal child would not be seen sporting. That beige jacket totally changes the cutesy tutu.

6. North West in her layered look

How does a child look so smart with layers like this? While visiting the Museum of Ice Cream with her fam, North wore a pink slip dress, under which she wore her plain black T-shirt and her fashion game was on point like a true Kardashian.

7. North West showing us how to work ‘oversized’

Most adults are unable to make something so comfortable look so cool. That oversized sweater paired with jeans, a thick gold chain and her signature VANS shoes is the epitome of fashion for Kanye West’s daughter, and we are just waiting for this trend to hit the runway pretty soon.

8. North West in her all black outfit

Normal kids wouldn’t think of things like wearing their own clothing line now, would they? Here is North West, legit wearing her own line of clothes from The Kids Supply and looking a kween. Black on black is not something a lot of people can pull off, and we are totally envious of her style.

9. North West rocks fashion from before her time

For North West, the early 2000s are probably retro, but she goes way back this awesome beige velvet dress with a matching choker and those constant VANS sneakers which make her look like a pop princess from the 90s. How a 4-year-old child does this, no one knows.

So many complex elements to this fashion statement I don’t even know where to start. The red velvet dress is layered over a graphic tee (genius) and accessorized with a thin, velvet choker, which also matches and of course the Yeezy pumps, which we could only dream of owning one day.

North West decided to show the world that nautical stripes are a thing of the past, and this is the correct way of rocking blue and white uniform pattern. Also, I am not aware of too many adults who will be able to pull off a uniform jacket with a casual t-shirt and silk shorts, so we are totally digging this look.

This is possibly one of the coolest North West outfits, even by her standards. Would you be able to rock a bright pink, slightly oversized sweatshirt/hoodie and distressed shorts on the beach? I think not. Also, it is a relief to see her with her natural hair down, because that top knot is too high fashion.

We sort of wish we looked this cool while sporting a minimalistic tee and boy shorts. Also, I’m feeling that double top knot trend catching on super soon. And truly, what would we do without those classic Yeezy sneakers?

Look at North West looking like a cute little mafia boss in her oversized fur coat. I mean, that fur coat alone probably costs more than a person’s college tuition. However that information doesn’t daunt north West and she rocks this all black everything look with ease and panache.

15. North West was inspired by a super fashionable lemon

Here is another specimen of the fashion line for kids that her parents- Kim Kardashian and Kanye West deigned with a lot of inputs from North herself, I am sure. The dress itself is a high neck choker dress, which she paired with a beige jacket, which was a pretty bold fashion choice, and topped it off with a pair of black sneakers and tube socks. Iconic.

16. North West schooling us on all-white

An all white ensemble is a recipe for disaster for us mere mortals, but when you are North West, who is 4 years old by the way, rocking a HIGHLY expensive all-white outfit is not big deal. That fur coat probably can compete only with the black fur coat she wore, and the rest of her outfit speaks for itself.

This is one of those classic North West outfits because that swagger is unmatchable. A black spaghetti top paired with a bright, tropical pair of shorts which is literally perfect for the beach is an outfit dream few adults manage to achieve with such flair. Also those reflectors are killing me. Even though we’re missing the classic sneakers, the translucent sandals are the perfect fit for the beach.

If you were under the impression that the age and place for cowboy boots was gone, think again, because North West recently rocked cowboy boots with black leggings, a black jacket and a body-con animal-printed top. This particular North West outfit was so cool that nature did a hair flip for her.

Did you ever think a person could look more like a Disney princess than an actual Disney princess? Well, here is North West dressed as Jasmine for Halloween, semi-matching with her mum and totally slaying the Halloween game.

Find me an adult who would look this good, wearing something this avant-garde, and make it look like it was the only kind of fashion that should exist. Even though her paparazzi mother was walking beside her in an equally shimmery ensemble, North looked like the true daughter of her go-big-or-go-home father. What a time to be alive.

Suggested read: All Hail The Queen: 20 Quotes By Beyonce That Teach All Women To Be Warrior Princesses

The cuts on this top, with her accessorizing truly establishes her as the queen of adult high fashion dressing, while at the same time, managing to look like a little baby. That sleeveless turtleneck is nothing short of revolutionary, and when paired with the shiny handbag which holds god-knows-what and a pair of standard jeans and sneakers, she looks like she is ready to take on the Kardashian game any day now.

Honestly, I don’t know whether it is the Kardashian genes here, or her mother’s overbearing stylist (her father), but this is definitely one of the best dressed kids in the whole entire world. 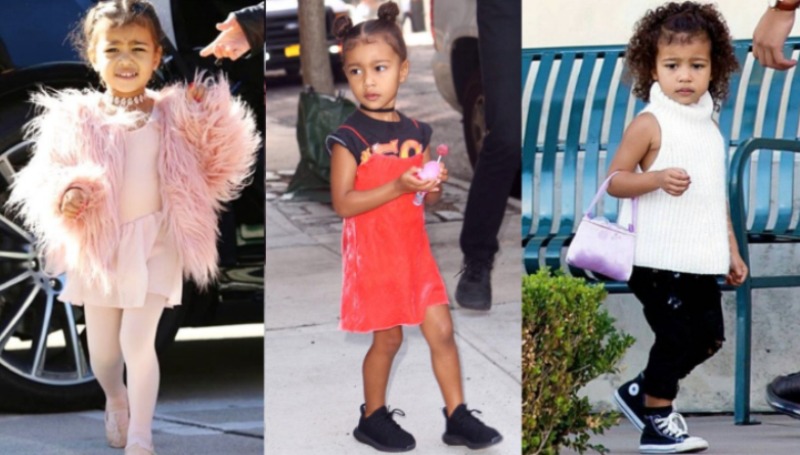 Article Name
21 North West Outfits That Are Fashion Goals For Most Adults
Author
Aishani Laha
Description
North West is probably the most famous child in the world, so here are some of the best ever North West outfits that would put an adult's wardrobe to shame.