An 89-year-old couple tie the knot, proving that love is ageless!

Love knows no bounds – of age, or looks, or color, or creed, or race. Love can creep up on you like a stealthy cat when you least expect it, or hit you like a Mack Truck with all the force it can muster. All that matters in the end is love.

Take for example, this couple in the UK. Their combined age is 178! And the couple got married just last week, Thursday, making them one of Britain’s oldest newlyweds. 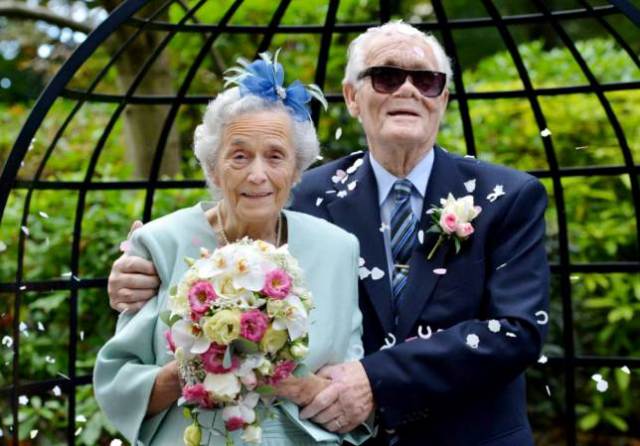 Mary Talbot and Fred Collingwood at their wedding

Meet Fred Collingwood and Mary Talbot. The 89-year-old widow and widower met at a social club for visually-impaired and partially sighted people in May, and soon their friendship turned to romance following a ‘quick kiss and a cuddle’ on the sofa. While Fred lost his eyesight and a chunk of his nose during his stint in the World War II when a mortar bomb exploded in front of him, Mary’s sight began deteriorating about seven years ago after her husband’s death, due to a condition called Age Related Macular Degeneration (AMD).

“It has been a whirlwind and now I couldn’t do without him,” said the new Mrs Collingwood. “I’ve said to him that if he dies we are going together.”

The young-at-heart couple got engaged in July, and a wedding was planned near their homes in Newcastle-under-Lyme, Staffs, just in time for Mary’s birthday. Fred said that the wedding was very “informal but it just felt like the right thing to do because we are so comfortable and affectionate with each other.” He added that, “We don’t behave our age together. How many couples in their 80s spend every day cuddling on the sofa. In fact Mary sulks if I don’t site with my arm around her.”

Mary confessed, “Freddie is a wonderful man and a great companion and makes me laugh a lot. I’ve had a wonderful day and I’m looking forward to many more years of fun and friendship with Freddie.”

Along with family and friends, the couple celebrated their union with a reception held at The White Lion pub in Weston, Staffs.

After coming back from the War, Fred went on to work as a physiotherapist for the NHS, and married Dorothy, with whom he raised four children. But Dorothy died of cancer in 2009, after 65 years of marriage. Mary, on the other hand, is a former pottery worker, and lost her husband Lewis Talbot about seven years ago.

A volunteer at the Friday Club, where the couple met, Elizabeth Glover said, “It was so lovely to watch their love blossom earlier this year. We have watched it develop and were thrilled when they announced they would get married.” And added, “They always come in together holding hands and smiling. They won’t be parted,” of the 89-year-old couple.

Well, if this couple can find love at the budding young age of 89, then all the rest of us definitely have a chance at love ourselves. Here’s wishing the golden couple a happy married life! May your ilk grow!