2017 is expected to be the best year for Bollywood movies, so far. Here are 9 movies that we cannot wait for; movies that we think will either break box office records or set new ones! See if you feel the same way about these movies. 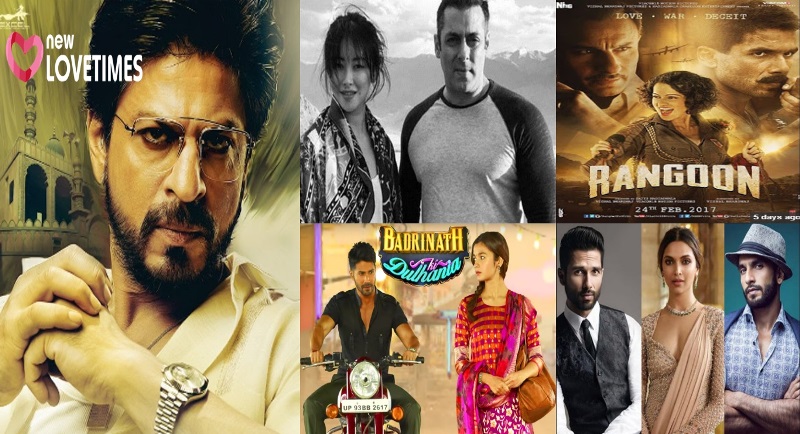 Here are the 9 fantastic Bollywood movies 2017 will be showcasing.

Suggested read: 10 TV series you cannot afford to miss in 2017

When SRK ties a “taaviz” around his neck, sports “surma” in his eyes, and wears a not-so-neat stubble, you cannot not look! The attitude that comes naturally to the Badshah of Bollywood makes his character in Raaes the ultimate bad guy. The trailer is already out, and if you have not watched it yet, you have missed out on some “dhamakedar” action.

The trailer of this Hrithik Roshan and Yami Gautam-starrer thriller, Kaabil, has already got all of us hooked. The stellar duo portrays a visually impaired couple in the movie. Kaabil revolves around Hrithik’s character, who is avenging his wife’s rape and murder. The movie is directed by Sanjay Gupta, and is set to hit the movie theatres on the 26th of January, this year, together with Shah Rukh Khan’s Raaes. Let’s see which movie reigns the box office.

Apart from the fact that Rangoon is a Vishal Bhardwaj movie, this film has created a stir because it stars Shahid Kapoor and Saif Ali Khan (now you know why!). Add to the mix, the supremely talented, Kangana Ranaut. Rangoon is set against the backdrop of the Second World War. The film will hit the movie screens on the 24th of February, this year.

Was Humpty Sharma Ki Dulhania successful in tickling your funny bones while giving you the right quota of romance? Well, Varun Dhawan and Alia Bhatt are clubbing up again for the second installment of the franchise Badrinath Ki Dulhania. Directed by Shashank Khaitan, the movie is set to release on the 10th of March, 2017.

Anushka Sharma’s first production venture, NH10, saw box-office success as well as won accolades for the gritty storyline. Well, the actress has upped the ante. Her next production, titled Phillauri, is a romcom, written by Anshai Lal. The movie will see Anushka romance Diljit Donsanjh in a unique love story with one of them being a ghost!

We have been waiting for this one for quite some time now. The Ranbir Kapoor and Katrina Kaif starrer Jagga Jasoos suffered a number of delays (did you know the shooting started in 2013?!), but the movie is finally hitting the theaters in April, 2017. The audience is not just excited to watch the movie because it is by Anurag Basu, but also looking forward to seeing an ex-couple share screen space.

Here’s what Ranveer Singh had to tweet about the movie,

“Extraordinary! never seen anything quite like it in Hindi cinema! Falling short of superlatives to describe it! Congrats to Team Jagga!”

Actor Salman Khan and director Kabir Khan are teaming up again. After Bajrangi Bhaijaan which hit screens in 2015, the duo will be coming together for a film called, Tubelight. The audience is already very excited about the flick, thanks to the quirky title, but the fact that we will see Khan romancing Chinese actor, Zhu Zhu, is what we cannot wait for!

Ranveer Singh, Deepika Padukone and Sanjay Leela Bhansali are all set to create magic, again. And this time we will see an addition to this team: Shahid Kapoor. This Bhansali treat has been in the news for many odd reasons, like the apparent financial troubles of this movie and the alleged problem between Shahid and Ranveer. Nonetheless, watching Ranveer as Alauddin Khilji, Deepika as Rani Padmavati and Shahid Kapoor as Raja Rawal Ratan Singh, will be something no one would want to miss. Padmavati is supposed to release in November 2017.

After Ek Tha Tiger, Salman Khan is all set to star in the sequel, Tiger Zinda Hain. Like in the prequel, we will see Khan and Katrina Kaif in the lead of the second installment. This movie is set to release in Christmas, 2017, and now you know what you are doing that season!

That’s a wrap on the Bollywood movies 2017 will be gifting us with. Did we miss out on some flicks that you think can make it big at the box office? If yes, let us know in the comments below. So long, people!

Article Name
9 Blockbuster Bollywood Movies 2017 Is Gifting Us With
Author
Riya Roy
Description
Here are 9 Bollywood movies 2017 will be showcasing, movies we cannot wait for, movies we think will either break box office records or set new ones!