Soha Ali Khan and Kunal Khemu all set to tie the knot!

After Salman Khan’s baby sister Arpita Khan’s big fat wedding, it is time another Khan sister followed suit. Yes, you heard that right! After a long live-in relationship with longtime boyfriend Kunal Khemu, actress Soha Ali Khan has decided to take the relationship forward and step into the arms of marital bliss. The love birds are all set to tie the knot on January 25th. 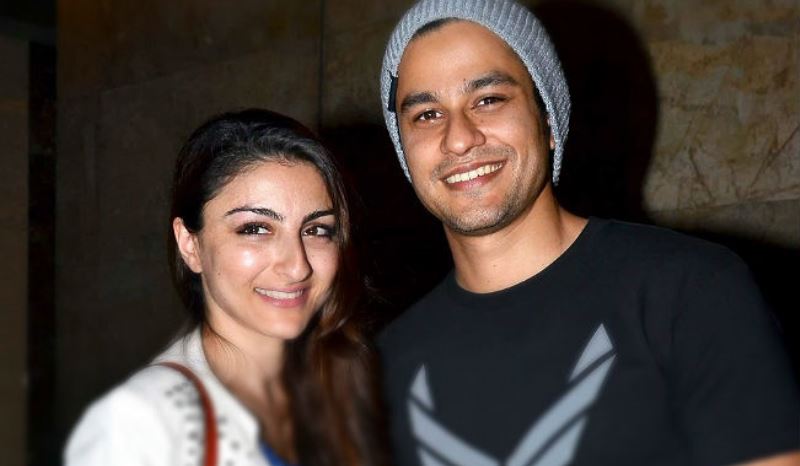 The two met on the sets of Dhoondhte Reh Jaoge back in 2009, and didn’t even know if they’d get along as friends, let alone being in a relationship! But Cupid had different plans. Our cherub’s love-dart struck them hard and the duo has been inseparable since. 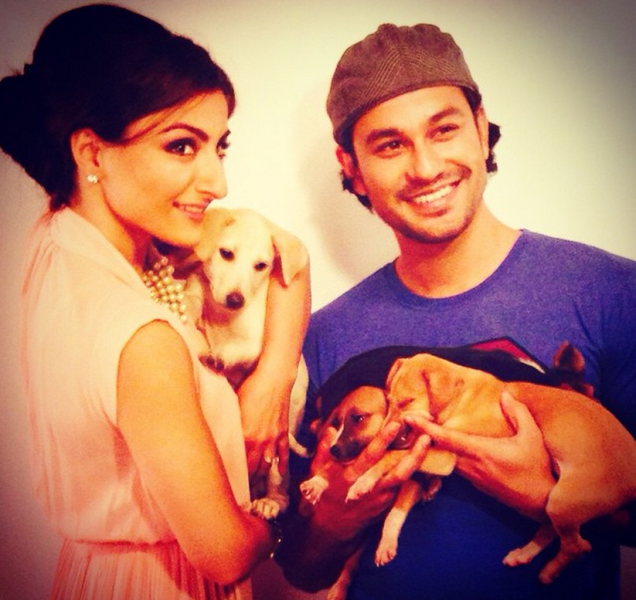 The couple, unlike other stars, had always been candid about their relationship. Speaking of their decision to move-in together in 2013, Soha had quite openly asserted,

“We have taken a big step together where we are living together, which is equivalent to being married. For me, that’s the biggest step. For me, this is the biggest commitment and we have made this commitment to make things work. The formality is just associated with signing paper, but the value and commitment is more important to me.” 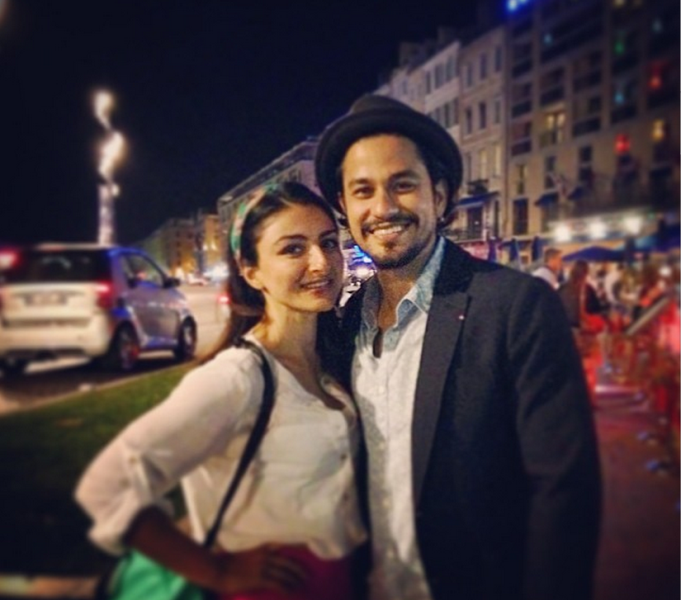 The proposal came in last year in Paris and a blushing and beaming bride-to-be shared her happiness with the world through a tweet:

Now, with ‘the formality’ (If a marriage in the Khan-Pataudi household can be called that!) just around the corner, it is almost impossible to not notice the excitement in the Khan and Khemu households. The mother of the happy bride-to-be, evergreen actress Sharmila Tagore, has expressed her happiness in no uncertain terms:

“Everyone in the family loves Kunal. We are all very happy that he and Soha have finally decided to get married. Kunal is a very nice person. He will keep my daughter immensely happy.”

Sister-in-law Kareena Kapoor Khan had expressed a similar emotion when the couple had announced their official engagement in July 2014. Talking for the entire royal family, she had said,

“It’s great that she is getting married. Everybody in the family is very happy. The most important thing is whenever Kunal is around, Soha is always smiling and that is the ultimate thing in life. I am happy they have decided to settle down.” 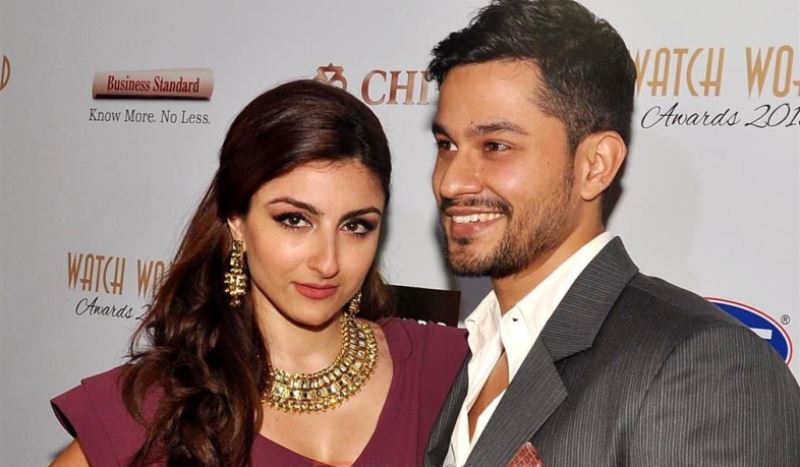 Although the Pataudi beti and Kalyug-star wish to have a simple wedding, a close friend of the couple has a different opinion. He has been quoted as saying,

“How can a wedding in the Khan-Tagore parivar be simple? Even the Saif-Kareena wedding was meant to be attended by just a selected few. Soha and Kunal have planned an austere wedding on January 25. But we feel it will finally turn into a big fat wedding.”

And new developments on the Soha-Kunal wedding reveal that the wedding is indeed going to be a small, intimate affair at home. This does not imply that the bride-to-be undermines the importance of this most special day of her life. Speaking of the day, she says,

“There are just few days left for my wedding. I am very grateful that I have my mother, my sister and friends, who are telling me what I should wear … But I have finally decided on my look. It’s a simple wedding at home. But I think it should be memorable and special. And I will be dressed for the occasion.”

While we are waiting to see what hue would finally complement the royal princess, we know that she has decided not to don the family’s traditional ‘gharara’ that Kareena wore on her wedding day. Needless to add, we shall keep bringing exclusive details of this ‘simply-grand’ wedding for you!

The day has come and as promised, we are here with the insider details of the Soha-Kunal wedding. Excitement was already rife in the air of the Pataudi and Khemu households ever since the lovey-dovey duo – Soha and Kunal decided to tie the knot. However, the festivities brought the anticipated excitement alive and kickin’ with the promise of solemnizing a bond of love. 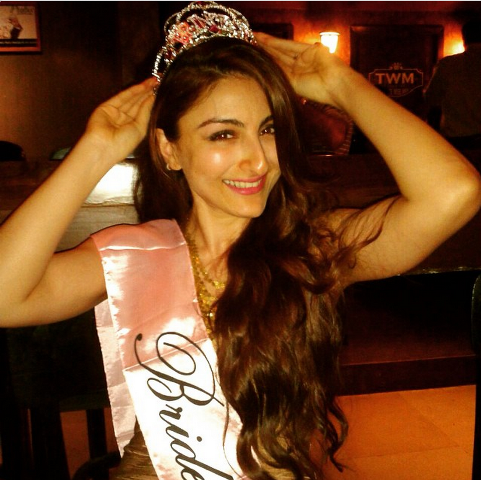 It all began with a fun bachelorette bash organized by close friends Neha Dhupia and Konkona Sen Sharma for the soon-to-be-wed-princess on 22nd January. The beaming and blushing bride-to-be looked spectacular in her one-shouldered Nupur Kanjoi outfit and wore a ‘Princess’ sash and sported a tiara. Sandhya Mridul and other friends were present at the party. In the midst of all the fun and excitement, Neha Dhupia tweeted:  “N the gorgeous bride to be is chillin like a Villian @sakpataudi.” 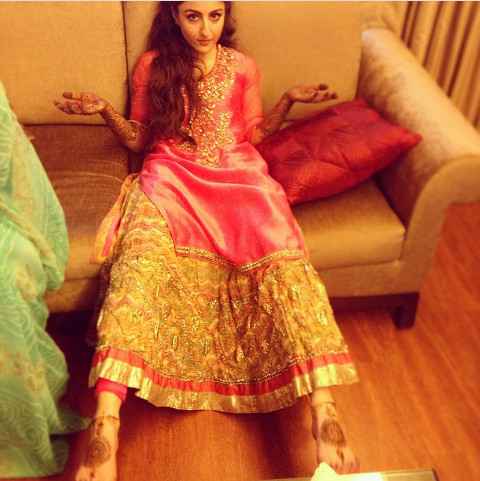 Soha Ali Khan at her mehendi

Whilst the Pataudi beti enjoyed a bachelorette bash on the 22nd, the real wedding celebrations began with the mehendi ceremony the following day. As averred earlier, Soha chose to keep every ceremony a simple, low-key affair attended by family and a few friends. At the mehendi, Saif was seen pampering his li’l sister while Sharmila Tagore was seen as an over-joyed mother who couldn’t help revelling in the happiness of her daughter. The bride-to-be looked stunning in a  pink and gold ensemble by Ritu Kumar and was joined by close friends Neha Dhupia, Konkona Sen Sharma, Arpita Khan Sharma and of course, sister-in-law Kareena Kapoor Khan. 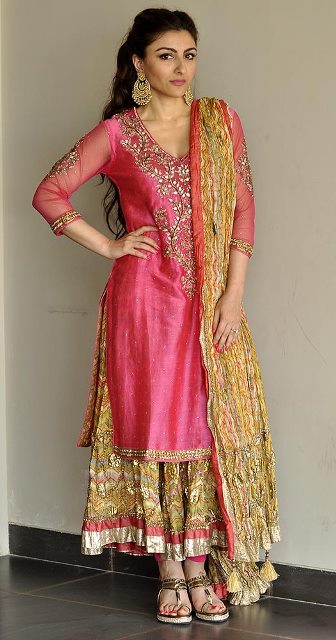 “The ensemble consists of three pieces and is worn one over the other. The inner peshwaz is made of soft cotton worked with a pastel palette of the lehriya pattern done in a Rajasthan inspired theme with deep borders embellished with chutki gota. An over kurti in pink chanderi yoked with the same gota work will be worn over the peshwaz. A similar jaipuri lehran odhni completes the ensemble, perfect for a day time mehendi.”

My last selfie as a single lady!! pic.twitter.com/KCS5UCTr0R

24th January saw a simple sangeet ceremony held for the soon-to-be-wed lovebirds at Soha’s Khar residence and soon, it was time for the wedding. Soha Ali Khan married ‘best friend’ (as evinced by her tweet) Kunal Khemu in a private ceremony today in the presence of select family members and a few friends. 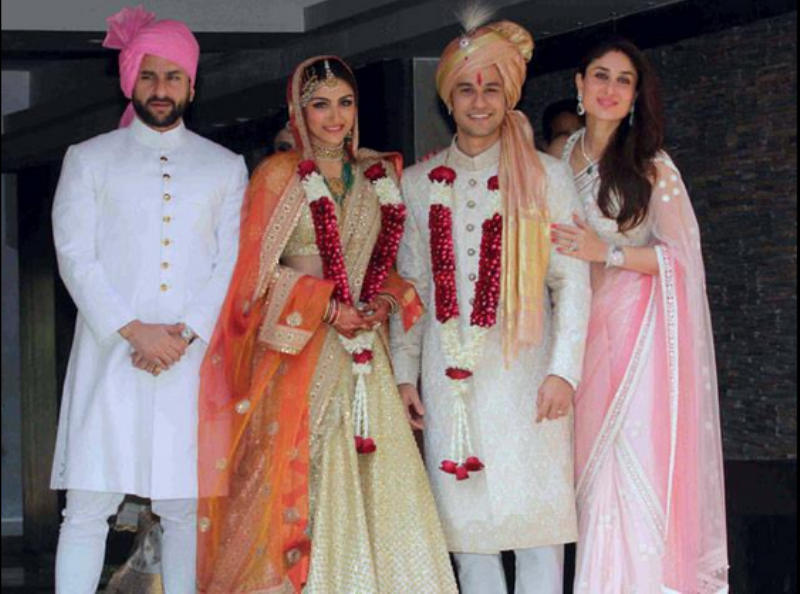 As revealed earlier, Soha did not don the traditional family ‘gharara’ but looked ethereal in a cream and orange lehenga-choli. Kunal’s sherwani and turban complemented the bride’s ensemble and made the couple look every bit a perfect nominal of royal love. The royal family, on the other hand, had the sister-in-law Kareena Kapoor Khan looking spectacularly gorgeous in a champagne pink sari by designer Manish Malhotra while Saif looked the perfect nawab in a flawless white achkan with mother Sharmila Tagore looking elegant in a white and gold sari. Saif’s daughter Sara and ex-wife Amrita Singh were conspicuous by their absence but Ibrahim (Saif’s son) stood proud and tall beside his father, joining in on the festivities. An ecstatic bride, Soha had posted her ‘last selfie as a single lady’ on Twitter earlier in the day while she posted pictures from the wedding later. Her tweets evince her happiness at having found a best friend and soulmate in now-hubby Kunal Khemu.

While the intimate wedding was indeed a stark contrast to the royal celebration that marked the Saifeena wedding in 2012, it was exactly what the couple wanted. And we, here at NLT, wish that they get whatever they want, for now and for always!