These Women In Suits Are Turning Up The Heat This Winter

If you thought gowns are the only viable sartorial options for red carpet events and fancy gatherings, then you couldn’t have been more wrong.

Even in the 21st century, there is an unnecessary emphasis on the relationship between women’s fashion and a woman’s femininity. Years of being classically conditioned to associate certain types of clothing with either of the gender binaries is still internalized in our mindsets and finds reflection in the kind of fashion and clothing that we see in the society around us. Who decided that the color pink is an exclusively feminine color and any man who wears a color like that is probably either homosexual or really, really bold for embracing his “feminine side”? Who decided that pantsuits and tuxedos are a strictly male attire that is out of bounds for women?

The very fact that we’re writing articles like these, shows how flawed our society still is and how we still haven’t been able to normalize or get our senses used to something as simple as women in pantsuits.

Forgive me for going a little off-track, though, because the feminist in me refuses to dial herself down when she is presented with an opportunity to point out the misogyny that we’re still subjected to, and that which largely goes unnoticed by majority of us because even we have been acclimatized to such behavior and ideals.

But without further criticism of the society and its ways (you can never have too much of that, can you?), let’s dive into the plush, sophisticated and classy world of women in suits, along with tuxedos as well.

What stands today as the ultimate power apparel for a woman, was once a source of scorn and scandal for many women who wore it back in the old days. Pantsuits and tuxedos were experimented by women as early as the 1870s when actress Sarah Bernhardt wore a custom-made Worth pantsuit. She was painted in it and referred to it as her “boy’s clothes”. Bernhardt was known for always subverting gender norms and breaking barriers; she played the role of Hamlet onstage and also dressed her son in women’s clothing.

Then the 1930s arrived and many famous women took to wearing pantsuits; however back then they were termed as “masculine style lounge suits”. But women in suits were such a bold statement against the norms of the time that several common women would be arrested for wearing pants in public, on the charges of “transvestitism”. Crazy how easy it is to make men insecure, right?

It’s interesting to note that it wasn’t before the 1960s that women started wearing pantsuits to the workplace and even then, the younger women wearing them would be scorned and judged by the men as well as the older women in the establishment.

Yves Saint Laurent is credited for making the pantsuit surge its way to popularity. He designed the Le Smoking tuxedo in 1966, and advertised it not to be worn as a masculine attire, but with bright shades of lipstick and high heels. A woman in a Le Smoking was the ultimate image of power and strength- establishing women as equals to men by appropriating masculine styles.

In Fall 2016, with support for Hillary Clinton rising, or at least appearing to, at the time; something that reached heights greater than her Presidential career was the pantsuit and tuxedo trend. The trend saw a steady rise all through the year, and further continued until Fall 2017. This helped the classic fashion trend catapult itself to the very forefront of the runway and the top of our shopping lists this fall/winter.

There’s just something really elegant and classy about women in suits and we are all for embracing this trend that is making a successful comeback from the glory days of fashion. Without further ado, here is a list of some celebrities who donned the pantsuit, exuberating sheer confidence and authority in the way they carried themselves.

If floral prints bursting with splashes of colors are your thing, then go for this bright pantsuit by Roberto Cavalli that Kerry Washington looks like an absolute diva in. Perfectly winged eyeliner, big hoop earrings, and a solid red clutch make this outfit look like a million bucks and more. Floral printed pantsuits are playful with just the right amount of feminine touch and a whole lot of sass.

No one rocks the pantsuit the way Demi Lovato does at the 2017 EMAs in London recently. She decided to go one step ahead with this powerful attire and we can’t help but be super impressed with the panache and oomph that she’s carrying it off with. With no accessories, nude lips, just the right amount of makeup for the eyes and her long tresses blow dried to perfection; she’s let her clothes do all the talking, and we’re honestly not complaining.

Have you ever met anyone who’s intimidated you by how stunning they look? Malgosia Bela, Polish model and actress, is the perfect match for an outfit that is as irresistible as the pantsuit. In this photoshoot for Porter magazine’s Fall issue, Malgosia effortlessly pulls off this Isabel Marant pantsuit with a wrap-around style top. Hoop earrings seem to go really well with pantsuits and add a playful touch to this formal outfit. If we could use one image to describe the term “boss-lady”, we would pick this one without a doubt.

If you thought we would have an article on celebrities who have done justice to the pantsuit without including Kim Kardashian, then you couldn’t have been more wrong. A close contender for the look that Demi Lovato donned, Kim too, decided to go shirtless and braless underneath her crisp black suit from the house of Gucci by Tom Ford. Loose curls and nude lips add more glamour to this outfit that was already a winner from the start.

There aren’t many things in this world that Cara Delevingne cannot pull off, and as one would expect, the pantsuit is not one of them. She turned heads with her silver bald and alien chic pantsuit at the Met Gala this year, and was easily one of the best dressed at this coveted event for all things fashion in Hollywood.

Suggested read: 10 Lesser Known (But Amazing) Indian Fashion Designers You Can Check Out if You Are a Hipster Bride

The Fifty Shades sweetheart looked gorgeous as ever in this bright red pantsuit she wore at the Hollywood Film Awards earlier this year. Accessorized by a chunky neckpiece and sandal heels; the red lips accentuated her outfit and made her look fifty shades of beautiful. Fall 2017’s favorite color makes Dakota look like the style icon that she is.

Ever heard of the saying “black is the new black”? This is a color that you simple cannot go wrong with no matter what. Anna Kendrick looks stunning in this sleek black suit paired with heeled pump shoes. The Pitch Perfect star’s outfit is, like her, bubbling over with sass and confidence. We love how clean and simple she’s kept this look; which, in turn, highlights the elegance of the suit.

If there’s one person who can pull off a pantsuit with the grace and class it truly deserves, it’s Emma Watson. Hollywood’s very own Hermione Granger looks elegant in this pantsuit that she’s teamed with a crisp white shirt. The matte red lips add a pop of color to the outfit; and her neatly tied bun, along with those shiny black heeled pumps make this look one of our top favorites.

If there’s anyone you should take inspiration from before breaking out into your pantsuits, then it is Victoria Beckham. Wearing her limited edition black tuxedo with a royal blue ruffled shirt, she looks nothing short of perfection. Her silver glitter pumps make this outfit shine brighter than it possibly could.

This is what you’d call a power woman. Blake Lively redefines style in this checked pantsuit. We love the matching trench-coat that makes this a comfortable wear for those chilly winter days. The crisp white shirt and the tie make this look perfect for formal meetings and workplace meetings. The matching bag and boots complete this look that is packed with style.

Suggested read: Here Are The Runway Trends You Need To Try This Season

When you think about the history of the pantsuit and the craze surrounding it currently, you realize how women have come along in this society. The pantsuit and tuxedo is a wardrobe essential for every independent woman out there, not just because of how versatile and elegant it is as an item of clothing, but also because of its symbolical relevance through much of recorded history.

From being something that could get a woman arrested, to now being synonymous with being the chosen outfit option for some of the most powerful and gorgeous women on this planet, pantsuits have truly been women’s allies in their struggle against society; redefining not just how women’s fashion is viewed, but also helping us break free from some of the gender norms that have been imposed on women since time immemorial. 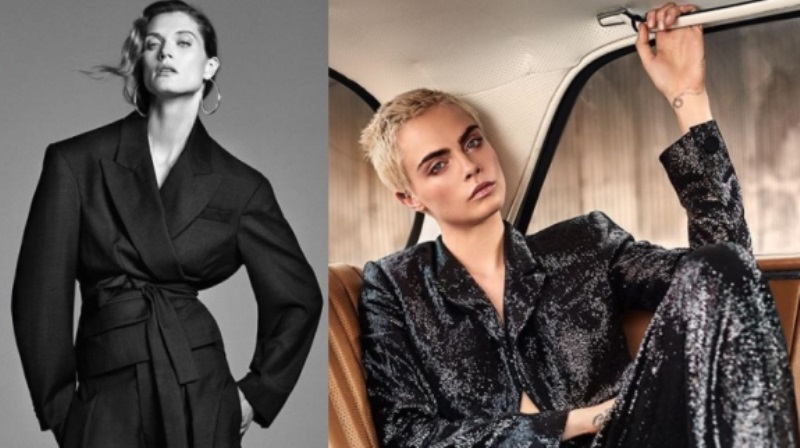 Article Name
These Women In Suits Are Turning Up The Heat This Winter
Author
Sanjukta Bose
Description
Let’s dive into the plush, sophisticated and classy world of women in suits, along with tuxedos as well.