William and Kate, the Duke and Duchess of Cambridge are probably the most well-known royals in the world and welcomed their second child, a beautiful daughter named Charlotte, just a few days back. They have been married for over 4 years now, but the fact remains that people still haven’t stopped talking about Kate’s wedding dress. Yes, that is the power of royal wedding dresses. They live on for decades and decades and people copy them and talk about them. There is no end the speculation, the comparison, and the excitement regarding royal wedding dresses. 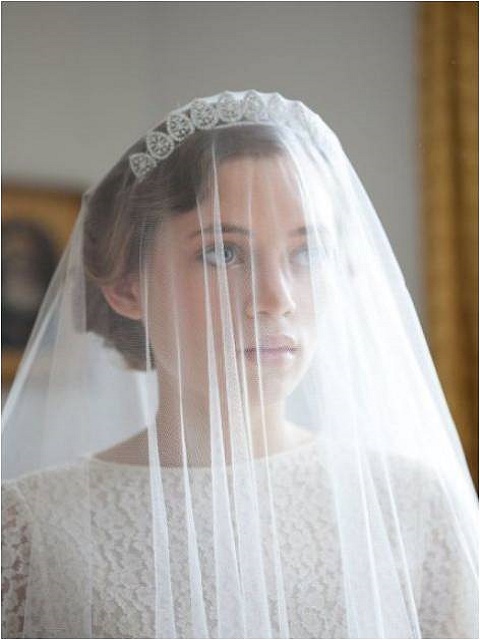 Since the marriage of the Queen mother (Queen Elizabeth’s mother) to the Duke of York in 1923, there have been over 40 royals who walked down the aisle with their royal (and sometimes not so royal) counterparts. But the fact remains that a royal marriage is nothing short of a fairytale with a train of flower girls and bridesmaids, carriages, men in uniform, and of course, the most gorgeous wedding dresses in the entire world, made with no cost spared.

Suggested read: What does your wedding dress say about you?

Here is a comprehensive list of 25 of the most gorgeous and unforgettable royal wedding dresses throughout history. Lady Elizabeth Bowes-Lyon, who is better known as the Queen Mother in contemporary times, married Prince Albert who was the Duke of York in Westminster Abbey in 1923. Even though the fashion during those times was much different from what it is now, her wedding dress is still considered one of the most iconic ones. The unstructured, low-waist, ivory silk gown was designed by Madam Handley Seymour. 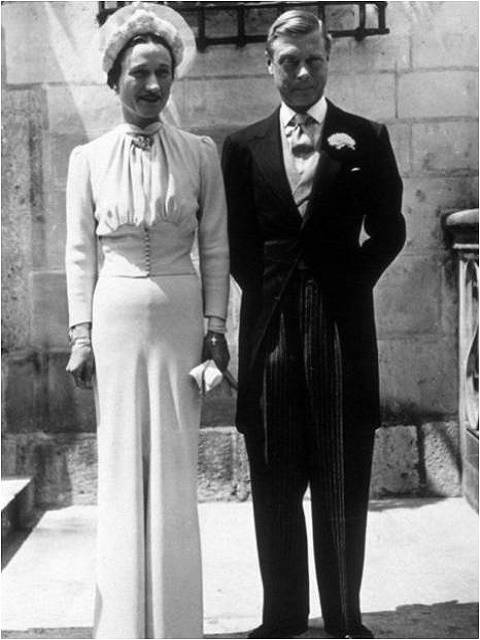 Wallis Simpson was a very controversial figure in history, because after all, the king of the United Kingdom abdicated his throne for her sake. Her wedding dress was as unconventional as she was. It was designed by Mainbrocher, and the light blue color of her gown was termed “Wallis Blue”. She chose to wear a matching straw hat made of blue tulle along with it. 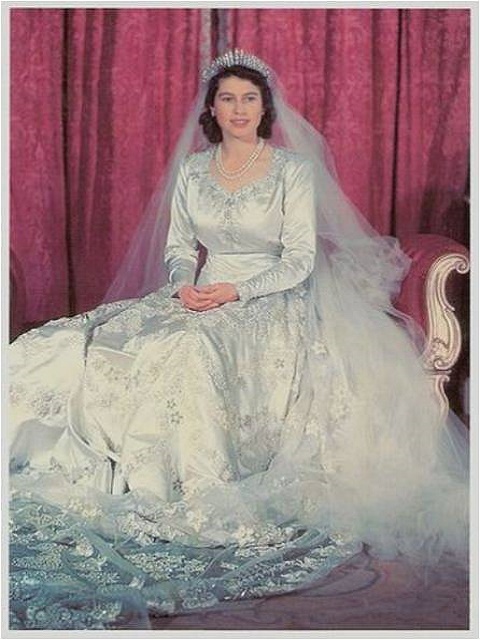 One of the most iconic weddings of all times, Queen Elizabeth II, who was then Princess Elizabeth, wore a classic vintage wedding dress. It was created by Norman Hartnell and had 10,000 seed pearls sewn into the ivory silk bodice. They married in Westminster Abbey in 1947. Now known as the Shah and the Empress of Iran, Queen Soraya and Shah Mohamed married in 1951 in an elaborate wedding where Queen Soraya chose to wear a custom made wedding dress designed by other than Christian Dior. 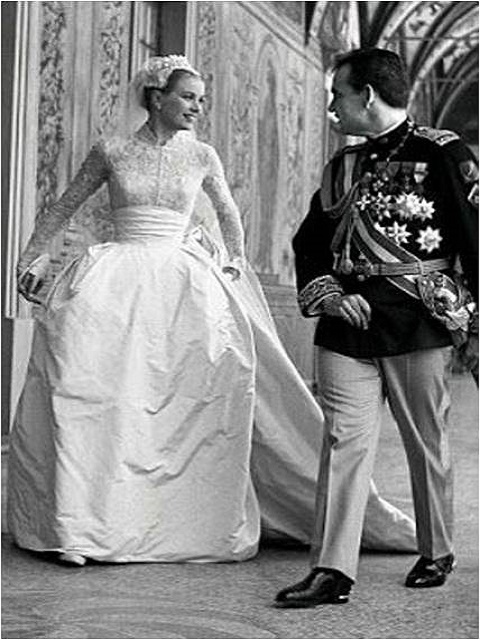 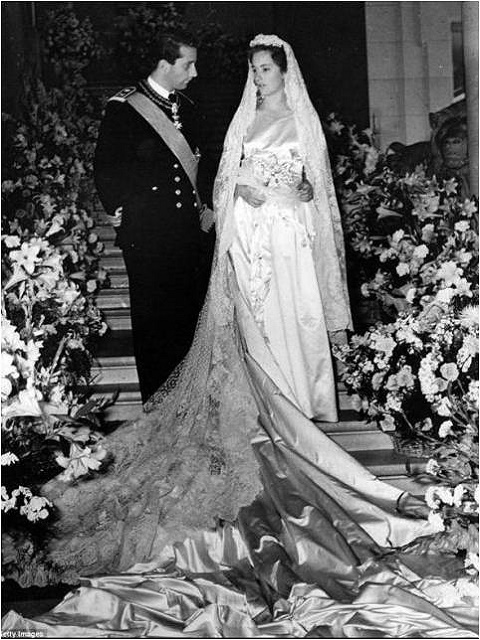 When Paola married Prince Albert in 1959, her wedding dress left the world stunned. It was several feet of pure Brussel, adorned with a large bow and a brooch. Instead of a tiara, she chose to wear a bloom of orange blossoms on her head. Just as her sister, Queen Elizabeth II chose a Normal Hartnell number, Princess Margaret also chose the same designer for her 1960 wedding to Anthony Armstrong-Jones. The bodice was made of Irish lace, with a Daisy brooch, and inherited veil and tiara.

8. Princess Sophia and Juan Carlos I 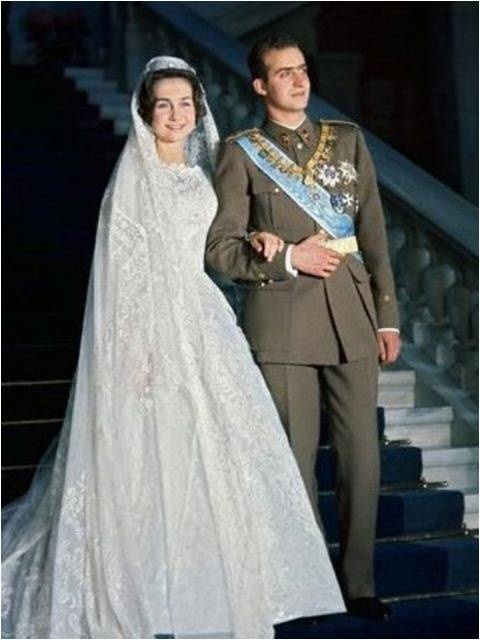 Princess Sophia of Greece chose a Jean Desses number, which was hand embroidered by several Greek seamstresses for wedding to Juan Carlos I of Spain in the year 1962. The iconic train of her dress was one of the talking points in the fashion world. Sonja Haraldsen is known as one of the first ever commoners or “non-royals”, so to speak, to marry into a royal family, when she married Crown Prince Herald in a royal ceremony in 1968. Her white ivory silk dress was bought from a fancy department store in Oslo. 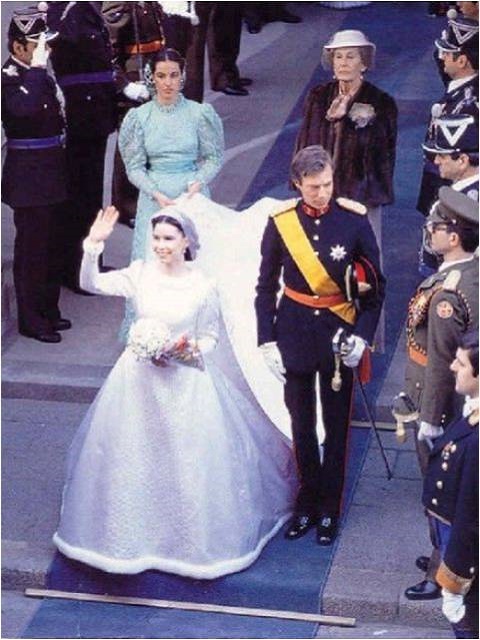 When Maria Teresa married her husband, now known as the Duke of Luxembourg in 1981, her wedding dress was designed by none other than Balmain and it was intricately embossed white silk with jewels and a fur lining. 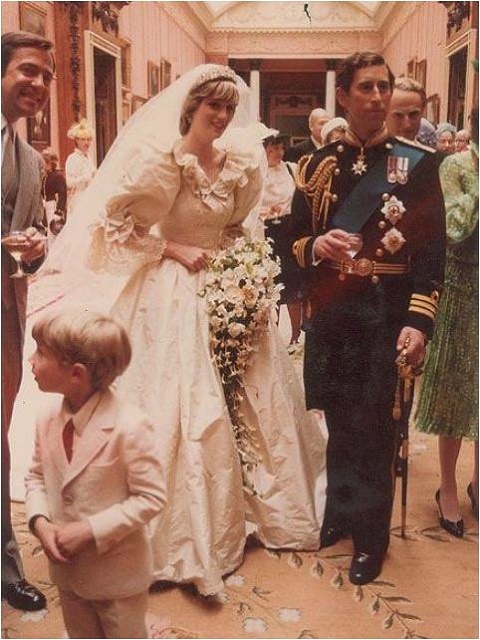 I probably won’t be exaggerating when I say that Lady Diana’s wedding dress is the most iconic royal wedding dress in all of history. Designed by Elizabeth and David Emmanuel, the dress contained over 10,000 pearls on ivory taffeta silk, bows, laces, and of course the unforgettable 25 foot long train. In the marriage between Sarah Ferguson and the Duke of York in 1986, the bride chose to wear a Lindka Cierach number, with padded shoulders and pearls, bows, and lace in ivory duchesse silk.

Suggested read: The perfect wedding dress for your Zodiac sign

13. Stephanie of Monaco and Daniel Ducruet 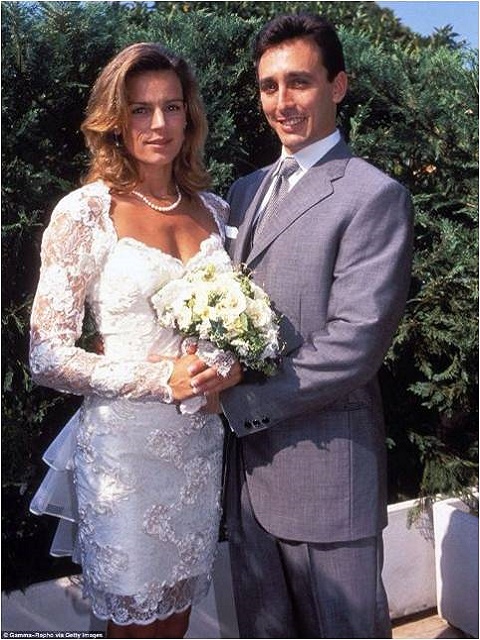 Princess Stephanie of Monaco was not only famous because she made the unconventional decision of marrying her bodyguard, but also because of her choice of dress. She was probably the first royal to choose a short dress, and it is a great model for modern brides. 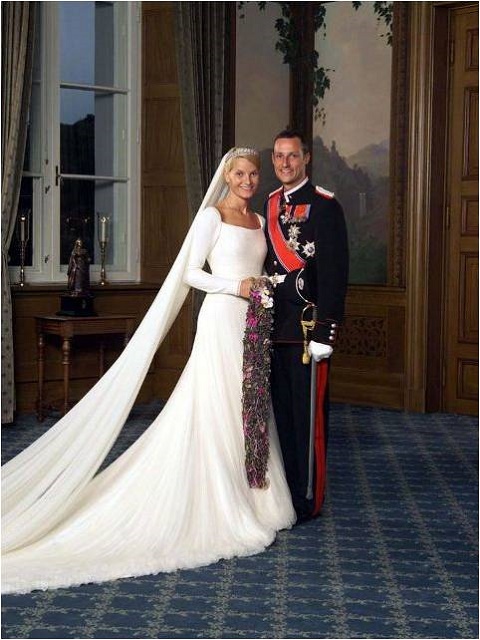 Moving on to the royal wedding dresses from the 21st century, one of the first and remarkable ones was Mette-Marit Tjessem Høiby’s wedding dress, designed by Ove Harder Finseth, made with silk tulle and pure silk crepe. When Maxima of Argentina chose to marry the Prince of Orange in 2002, she chose a simple Valentino gown which was hand-embroidered with elegant floral lace panels and a silk tulle veil. The Princess of Norway chose to marry her author husband in 2002 in a Wenche Lych number. This dress was a two-piece, elegant royal wedding dress, consisting of Swarovski crystals and cultured pearls, diamonds and gold. The then Prince of Asturia married former journalist Letzia Ortiz in 2004, where the latter chose to wear a wedding dress designed by Manuel Pertegaz. The intricate silver and golden embroidery on her dress was truly memorable. Autumn Kelly, who married the Duke of Edinburgh in 2008, was the first ever Canadian to marry into a royal family. She chose to wear a dress by designer Sassi Holford, and it was a royal lace wedding dress with elaborate tulle and satin work. Designed by Par Engsheden, the wedding dress worn by Princess Victoria for her marriage to her personal trainer was made of cream duchess silk satin and had a whopping 16 foot long train. Kate’s dress was easily one of the most iconic royal wedding dresses of all time. Inspired by Grace Kelly and designed by Alexander McQueen, it also featured Chantilly lace appliqué. It was simple, yet regal. 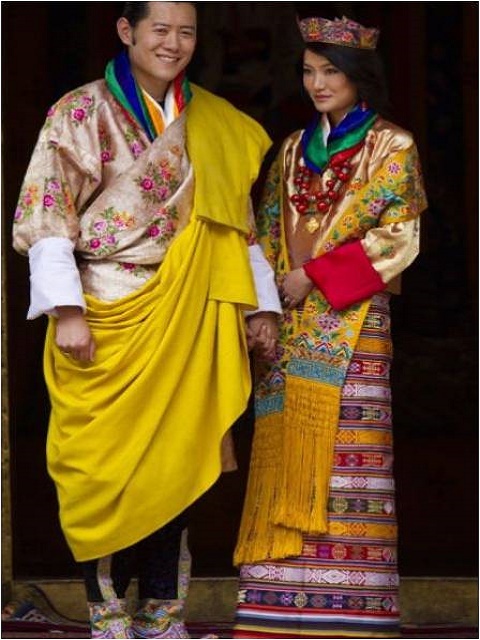 Considered to be one of the most beautiful royals in the world, the marriage of Jetsun Pema to the King of Bhutan was a spectacle. She ordered several kiras for her wedding from renowned weavers to choose from. Rumor has it that it took three years to weave! 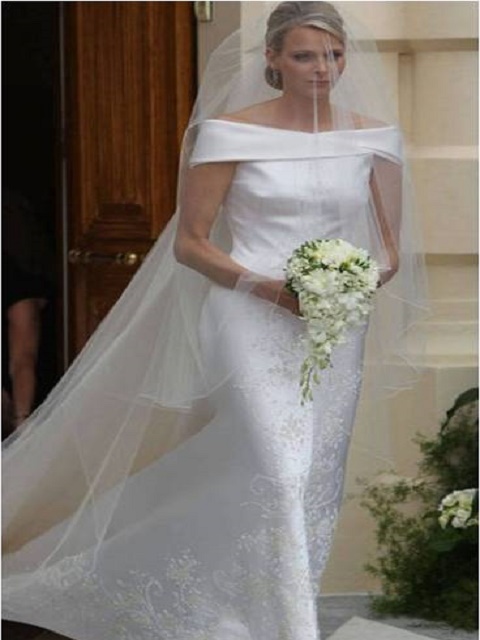 Princess Charlene, who was a former South African swimmer, had her wedding dress designed by Armani, taking a whopping 2,500 days to make. It was covered in 40,000 gold beads, 40,000 Swarovski crystals, and 20,000 mother of pearls. Countess Stephanie of Luxembourg was married in 2012, and her wedding dress designed by Elie Saab went a step further, containing 10,000 meters of silver thread, 80,000 crystals, and 50,000 pearls. Claire Lademacher also chose an Elie Saab number for her 2013 wedding to Prince Felix of Luxembourg. Her wedding dress was made of Chantilly lace and had embroidery work throughout, serving as great inspiration for modern brides. The most recent royals to tie the knot, Princess Sophia, a former swimwear model, chose to sport an Ida Sjostedt number made of silk crepe and organza and a hand-cut, hand-stitched train behind her.

Looking at some of the most beautiful royal wedding dresses throughout history is a wonderful feeling, and it also serves a very practical purpose. Contemporary brides all over the world can draw inspiration from these dresses and also look regal on their wedding day. Whether it is a vintage wedding dress, a lace wedding dress, or one that is exclusively inspired by one of the above, the royals have tried and tested them all, to ensure that you suffer from no shortage of ideas and inspiration for your big day. Article Name
25 Beautiful Royal Wedding Dresses That Are Totally Swoon-worthy
Author
Rayne Carruth
Description
Here is a comprehensive list of 25 of the most gorgeous and unforgettable royal wedding dresses throughout history.

"All I can be is me - whoever that is." 20-something writer, still trying to figure it out, forever in love with cheesy rom-coms, and 19th century poetry.