A few days back, we saw a video go viral on YouTube. In the video, all female employees of a Chinese office, in Beijing, were lined up, to receive a peck on the lips from their male boss. Not a typical office behavior, is it? Well, according to the boss, this ‘ritual’, where women MUST kiss the boss, is a part of “morale building”. However, his lewd idea of morale building has drawn attention not only in China, but also all over the world, as confirming perceptions of work settings and gender relations.

Wonder, who inspired this practice? According to reports on the Internet, the boss had derived this concept from the American corporate culture, which surely raises similarities with other reports regarding a particular presidential candidate we all know!

Though a tempting piece of news, popularly dubbed, as the kiss the boss scandal, is supposedly false, according to a number of employees who work at the alleged company.

A woman who works for this Chinese company, Hansens, which makes brewing equipment and is based in Tongzhou, said,

“It’s fake news. Look yourself, our office doesn’t look anything like the office in the video.”

The woman requested to be kept anonymous, and added that her company didn’t have justify something that was clearly false.

Another worker, sniggered when a reporter inquired about this video. She pointed out that the uniform that the employees were wearing (Black and white) is not the dress code at Hansens. Also, the man in the clip looks nothing like their boss at Hansens. She added that it looked more like a game, where each person passes something from mouth to mouth, since in the end, the last person seems to have dropped something.

Whether the story is true or just another example of picking up a click-bait story without fact-checking, one thing cannot be ignored: The comments this video is receiving from around the globe. Women are opening up about their experience of sexual assault and harassment in the workplace. Some of the comments include,

“I was once forcibly kissed by a boss.”

“Once a male colleague asked me how far my tights went up, and that I was beautiful. I felt everything, but beautiful.”

“I have received mails of a sexual nature from my manager, in the past. When I confronted him, he laughed about it, saying it was only a joke.”

“The most senior person in the organization made a series of jokes over the course of six months about how I might want to give my boss a ‘rub down’ or a ‘massage’. Another director tried to grab my breasts at a social gathering.”

These are just a few stories of women who have been sexually abused or made to feel uncomfortable at the workplace. Sexual harassment is a reality that more than half of the population of working women face, around the globe. According to a new research, the extent to which sexual abuse has spread in the workplace is alarming. For the first time in ten years, more than two-thirds of women between the age of 18 and 24 have accepted being sexually harassed at work: Subjection to unwanted sexual jokes, sexual comments about clothes, makeup or body and body language. One in every four women, has been put through unwelcome sexual advances, with one in 7 being touched or kissed against their consent.

Can there be anything worse? Well, there is. Most of these experiences are snubbed by the perpetrators as friendly banter or joke!

The survey has also revealed that most of these wrong-doers at work are men. 8 in every 10 cases that got registered, women did not feel empowered enough to ask for help or talk to the management about the pestering they were facing. More than a quarter of these women, felt,

Sexual abuse devastates the victim, and subsequently, affects productivity and workforce morale. For this reason, it is necessary the management adopts stringent policies that ensure an incident of sexual harassment does not go unnoticed. The managers need to be trained to identify bullying and wipe it out, immediately. Also, there must be mechanisms in place that encourage and empower women to report an experience of sexual abuse as soon as it occurs. The co-workers, too, need to be sensitized about such happenings, so that, first, they don’t indulge in such activities, and second, lend support to their colleagues who have been harassed.

The kiss the boss scandal may be true or may be false, but sexual harassment faced in the work place is no myth. The workspace, sadly, is one of the many places, where women don’t feel safe. And what can we do about that? All of us can play a very important role in creating a workroom, where everyone feels empowered, safe, heard and cheered. All we need to do is start perceiving, listening and acting, promptly.

Have you had an experience in your office when you felt sexually harassed or abused? Call out the bully in our comment section. That will be a first step in stamping out the evil!

Want such trending news pieces to be delivered in your mailbox each day? Sign up for our newsletter today! 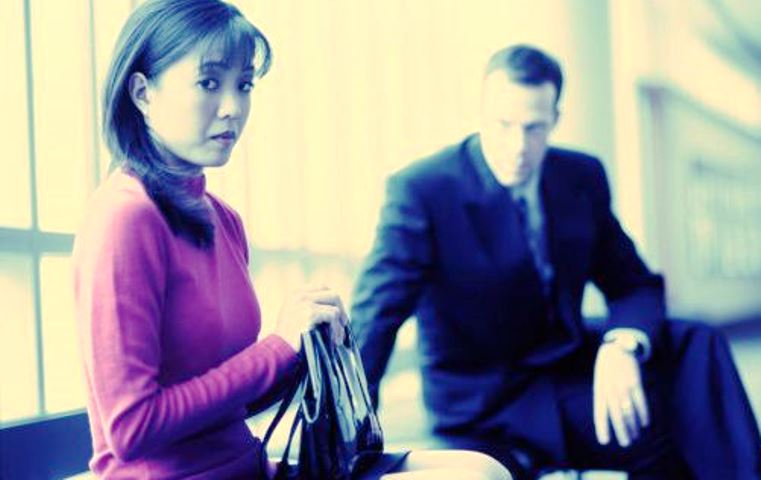 Article Name
A Chinese Company Compels Women Employees To Kiss The Boss On The Lips Every Day Before Starting Work
Author
Riya Roy
Description
Whether true or not, the kiss the boss scandal has bared something scarier: The prevalent culture of sexual harassment at work, which surely isn't a myth.