Up In The Air: Kolhapur Couple Get Hitched 600-feet Up!

KOLHAPUR: 33-year-old Jaideep Jadhav, a trekking enthusiast, tied the knot with Reshma Patil, 26, *wait for it* while on a 350-foot-long temporary three-line ropeway. The wedding ceremony was conducted over the 250-foot-deep valley of Jakhani, 70 km from Kolhapur! Not just the couple, even the priest hung from one of the three ropes to perform the ceremonial rituals this past Sunday.

The Story: Up in the air wedding ceremony!

Jaideep and Reshma took their “arranged marriage” to another level, quite literally! They exchanged garlands in mid-air in the Jakhani valley that lies between the 3,000-feet tall Vishalgadh and Panhala peak, about 15 km from Bhattali, the base village. 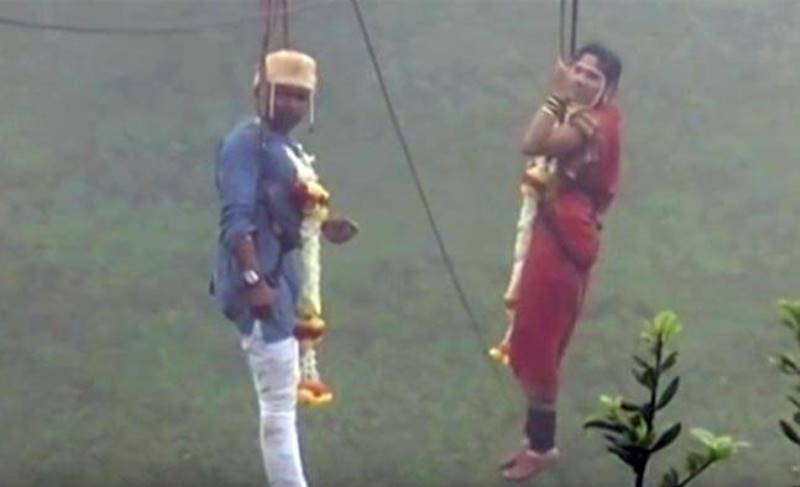 Jadhav, who treks almost religiously, wished to create awareness about adventure sports. He and his bride wanted their marriage to serve as a live example. Their mentor, Vinod Kamboj, who is the President of Western Mountain Sports, Kohlapur, planned this wedding.

“While Mr Jadhav was all prepared for the ‘hanging’ nuptials, his bride-to-be Reshma – a first-timer for any such ‘high-flying’ adventure, had no hang-ups and joined enthusiastically, albeit a bit nervously,” said Kamboj.

35-year-old, Suraj Dholi, a professional priest, served as the third critical ‘hanger on’. 1200 people attended the ceremony, of which, 1000 were from nearby villages, and the rest comprised of relatives and friends of the couple.

Both Jadhav and his bride, Reshma, wore traditional Maharashtrian wedding attire; dhoti-kurta for the groom, and Mahrashtrian bridal saree with zari, for the wife-to-be. They tied onto firm, double nylon-fibre fastens, with supports.

Suggested read: The most adorable wedding ceremony fail EVER!

The duo was slowly eased on to the venue of the ceremony in the heart of the valley, which has a direct 600-foot drop! The “muhurat” (auspicious time of the marriage) was at 1 p.m.

Dholi joined them mid-air, and started reciting the holy mantras. He completed all the rituals while hanging mid-air, except the “saat-pheras” around the divine fire.

The marriage chants were heard by the people gathered below using cordless microphones. Jaideep and Reshma exchanged garlands, before which, Jaideep tied the “mangalsutra” around Reshma’s neck. All the while they were hanging in space, with cottony clouds billowed around them. It also drizzled a little, creating an incomparable romantic spectacle. 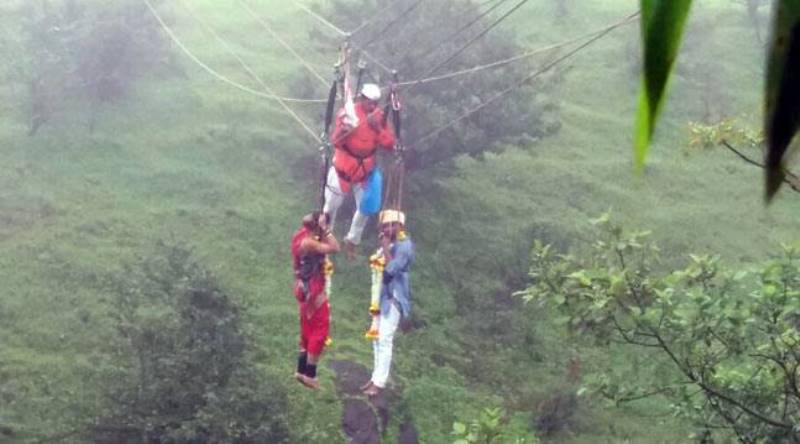 As the crowds boomed their blessing across the valley, and clapped all along, the marriage was declared as solemnized. The people continued cheering the newlyweds throughout.

The wedding, from the moment they were tied to the ropes to the time the marriage was formalized, took a little over 40 minutes, said Kamboj.

After landing and being freed from the nylon ropes, the couple went and prayed at a nearby temple. They took the family’s blessings, and were applauded by their friends and other invitees.

The feast time comprised of a simple wedding fare where masala pulao, vegetable curry, dal, and sweet sheera were served to all invitees as well as the villagers.

The arrangements for this mid-air wedding ceremony had begun from Friday. Reshma was given some training since she is a complete novice when it comes to adventure sports. Mumbai’s Malay Adventures’ President, Mahiboob Mujwar, and Kohlapur’s Hillriders & Hikers Group, provided the technical support and equipment to make this a success.

“Ours was an arranged marriage, the ‘muhurat’ for which was on July 31. This idea came from my friends, and I liked it immediately. Reshma’s family also readily agreed for the event,” said Jaideep, who is a computer science engineer by profession.

The total wedding expenditure came to about INR 50,000/-, which was borne by three different organizations, including Western Mountain Sports, based in Kolhapur.

“When I was released over the valley, I was afraid that I might fall. However, the mystical fog all around and the constant drizzle… motivated me to experience the best 15 minutes of my life,” Reshma said.

Here’s wishing this adventurous couple a happily ever after!

Article Name
Up In The Air: Kolhapur Couple Get Hitched 600-feet Up!
Author
Riya Roy
Description
If you think you got hitched in a pretty cool way, think again. This up in the air wedding ceremony will leave you gasping for air!