Asin Gets Married To Rahul Sharma In A Hindu Ceremony Too

Bollywood actress, Asin Thottumkal tied the knot with Micromax co-founder Rahul Sharma. The couple had a Christian wedding in the morning, which was followed by Hindu rites. The 30-year-old Ghajini star got married in a private ceremony graced by close friends and family only. Both the weddings were conducted in the resort, Dusit Devaran, itself. While 50 guests were invited in the morning, the shaadi was honored by 200 guests.

This is the hotel (@DusitDevarana ) where #Asin will be getting married to @rahulsharma on 19th January 😊 pic.twitter.com/YflpXwIKR3

The gorgeous #asin and handsome #rahulsharma will be tying the knot at the stunning resort… https://t.co/nvCa1TB7qv pic.twitter.com/ViuMahwM2D

The Church wedding was done following the Catholic rites and took place around 11 in the morning, yesterday. Her fan club shared pictures of the couple around 3 P.M. Asin wore a white gown, designed by Vera Wang, while Rahul, 39, sported a black suit and a bow tie. The couple undoubtedly looked really handsome and very happy! Touch-wood!

“It was a beautiful wedding. Everyone looked amazing. It was Asin’s idea to have a Catholic wedding. We all are very happy,” said a close relative of Rahul.

#AsinThottumkal ties-the-knot to Rahul Sharma. We wish the couple a Happy Married life ahead

According to sources, there was an exclusive 10-tier vanilla cake that the couple cut after telling their vows. The Delhi-based music group called Elohim Worship performed at the couple’s wedding.

“Everything went great at the wedding. We played 2-3 songs. Asin looked beautiful in her white gown. We had a rehearsal yesterday,” said a band member.

In the evening, the couple had a Hindu wedding to make sure both the faiths are equally revered to. The shaadi included jai mala and pheras, a typical of a North Indian vivaah! Akshay Kumar graced the evening wedding too as a baraati. Guests have confirmed that Rahul had arrived in an open car for the baarat. Asin was wearing Sabyasachi Mukherjee for the evening wedding.

Suggested read: Asin and Rahul Sharma get married at church

Both the functions were kept very inmate with tight security that was arranged at the hotel’s entrance. A get-together is expected to take place today at Rahul’s private farm house. Akshay Kumar will be joining the couple today as well. There will also be a wedding reception where the couple will host their friends and families in Mumbai.

In August last year, Asin revealed that she was seeing Rahul Sharma and were set to marry each other. It was during her promotions for All is well, though the couple had already started dating 3 years ago! Asin, known for being a very private person, remained tight-lipped about any details of her love life. It is when Rahu proposed to her with a 6-crore solitaire that her wedding became the talk of the town. The pictures of her wedding invite further confirmed that this was going to be a helluva grand affair!

Akshay Kumar, who was Asin’s co-star in Houseful 2 and Khiladi 786, played cupid by introducing the love birds. Akshay took to Twitter when he was sent the first wedding invite by the couple. “Yes, I introduced Asin to Rahul Sharma”, said Akshay Kumar on being asked whether he played matchmaker. Akshay was also the best man to Rahul for the Church wedding.

It is very strange that Asin, who started her career in Bollywood with A.R. Murugadoss’ Ghajini, has a love story similar to Kalpana in the movie, getting hitched to a mobile company owner (so only the happy parts!). 😀

Here’s wishing the couple loads and loads of happiness. May they be together always and forever! ☺ 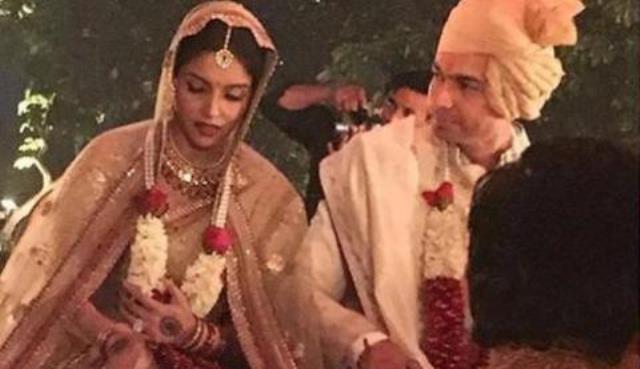 Article Name
Asin Gets Married To Rahul Sharma In A Hindu Ceremony Too
Author
Riya Roy
Description
Asin is now a married woman!