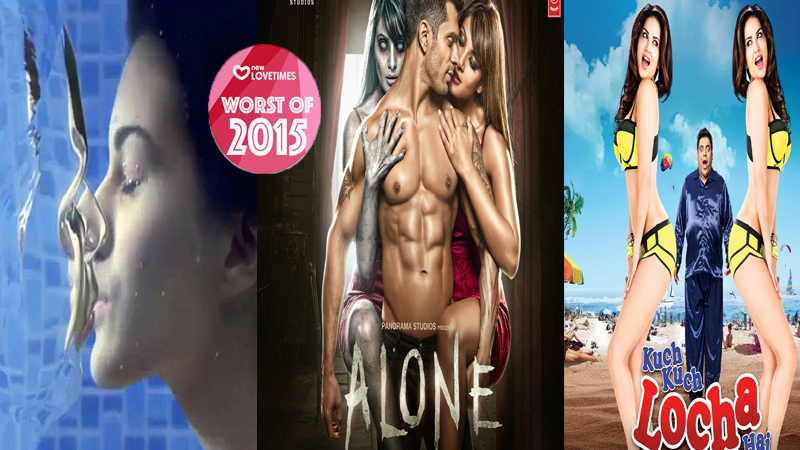 I think Bollywood should leave science fiction alone. This film was nothing ‘sciency’. No heads or tails whatsoever and complete absence of anything you may call a plotline or story. I had no idea what was going on throughout the film. Also, why Emraan, why? We do love you- y u do this to us?

I thought Arshad Warsi was a funny guy. Well, maybe he took the compliment way too seriously and decided to make a joke of a movie with Welcome to Karachi. A sad, sad version of Dumb and Dumber with even worse songs!

A horror movie has to be on this list, isn’t it? Or maybe not because Alone doesn’t qualify as one! A silly plot, Bipasha Basu in a negligee, a million shots of Karan Singh Grover shirtless (yes ok, you have a nice body, we get it) creaking stairs, a dysfunctional fan, a forest setting and of course, a white faced ghost. Yay! All this does not a good horror film make.. so, Bollywood, about time you left this genre out of your to-do list too.

Ah, Sunny Leone, her new film Kuch Kuch Locha Hai is worthy of this place. This was supposed to be, ahem, a ‘sex-com’. I think the director hoped that starring Sunny Leone would be enough to make the film a BO hit. Apparently not..

Dilliwaali Zaalim Girlfriend earns the next spot and rightly so. What is this new fad of turning song lyrics into movie titles anyway? This ‘rom-com’ starring Jackie Shroff fell flat on its face soon after its release.

Khamoshiyan should have the honour of taking this one. The film stayed true to its title and came and went quietly. <silent claps>

This film. Ah, what do I say? This film was deemed ‘semi-porn gibberish’. The only aim of this film was to showcase Sunny Leone in all angles possible, in as many outfits and against as many backdrops. So, if you’re into that kind of stuff, well, go for it!

No, it’s not a greeting. It’s a movie! Bet you didn’t know that 😛 This comic film atleast earned a laugh in that it tried.

OK, I am really torn here because I want to give this award to two films. This one should have been the easiest! MSG Part 1 AND Part 2. Standing for Messenger of God, starring Gurmeet Ram Rahim Singh, I don’t know what the deal was. Was he Superman? Was he a musician? What was the movie?

Article Name
#WorstOf2015 Top 10 Worst Bollywood Movies 2015
Author
Amrin Talib
Description
You might not even recognize some of these worst Bollywood movies of 2015...