2015 has been a very, very active year in terms of celebrity marriages, with big-shot names like Johnny Depp, Cameron Diaz, Amy Adams, Ashton Kutcher and Mila Kunis tying the knot. However, it has also been one of those years when these celebs have gone all out in choosing their wedding dresses, from some of the leading labels in the fashion industry. 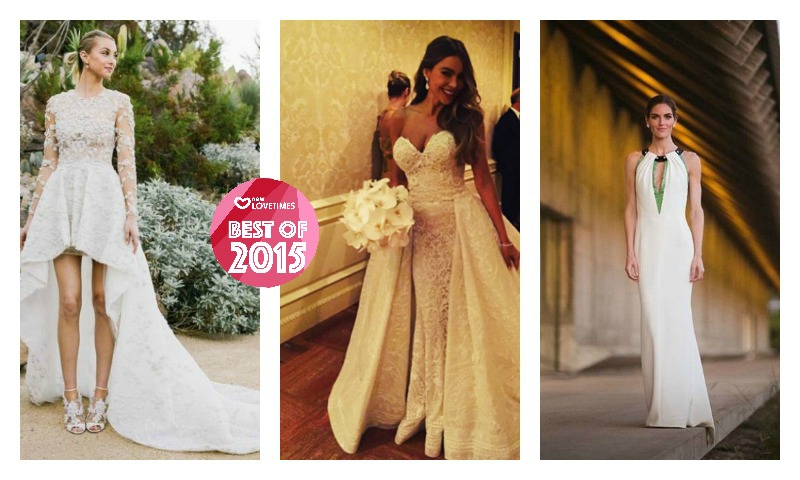 Here is a look at 10 of the best celebrity wedding dresses worn by them on their big day, in 2015. 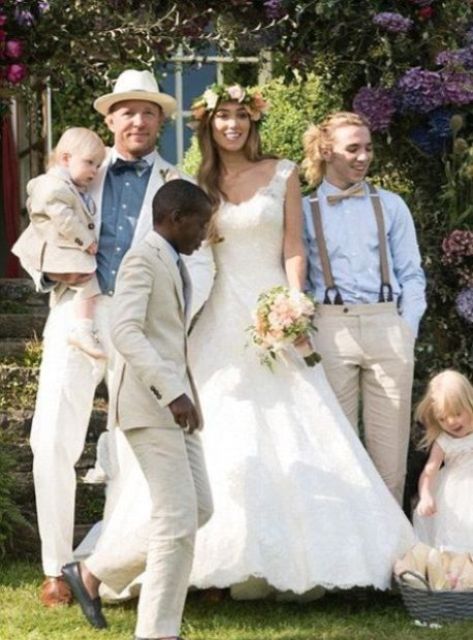 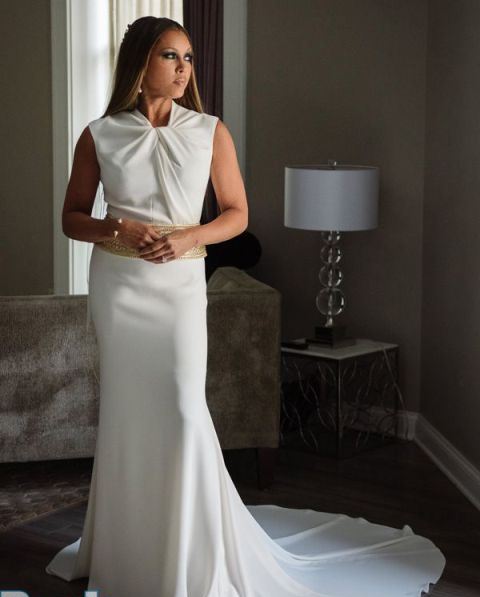 Williams decided to go with a simple, streamlined ivory silk wedding dress with a refreshing gold band at the waist, designed by Carmen Marc Valvo. The dress, like the wedding ceremony, was inspired by Egyptian themes, because that is where the two lovebirds first met. As Vanessa Williams’ husband described it, the dress was “sleek, simple, and sexy.” 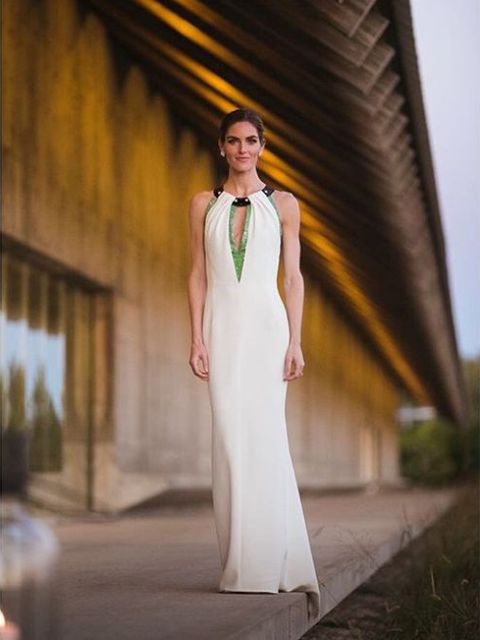 Talk about unique wedding dresses! Hilary Rhoda, known as the face of Estée Lauder, is a gorgeous individual as it is. However, she looked exceptionally stunning in her Carolina Herrera column wedding dress in ivory silk and green grosgrain detailing. The surprise black embroidered neckline added to the unique charm of the wedding dress, as did the 14.7 carat diamond earrings that the model chose to accessorize her wedding dress with. 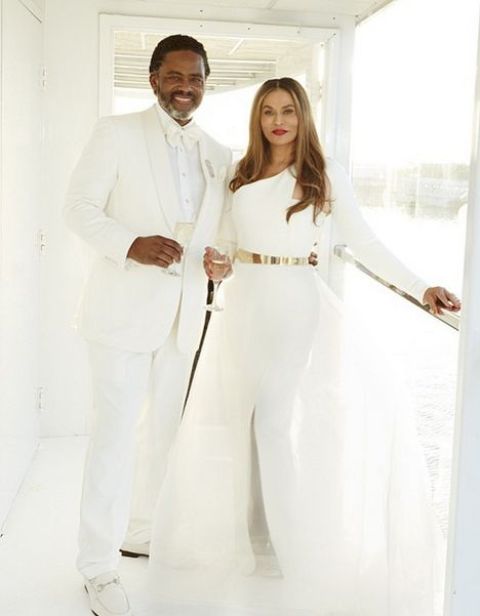 Beyoncé and Solange’s mother got married to boyfriend Richard Lawson in a lavish, all-white cruise ceremony in a sleek Romona Keveza number, with a gold band completing her stark white one-shoulder wedding look. Considering that Tina is 61 years old, this dress made her look youthful, appealing, and elegant. But then again, we expect no less from Beyoncé’s mother, do we? 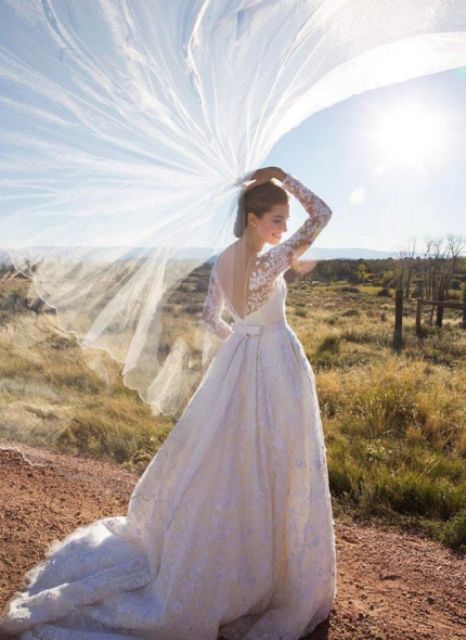 The Girls star chose to get married in an unforgettable Oscar de la Renta dress, with a strapless, backless bodice, long lace sleeves, and an ethereal veil, which compelled Lena Dunham to call her the “most beautiful bride in the world.” We couldn’t agree more! 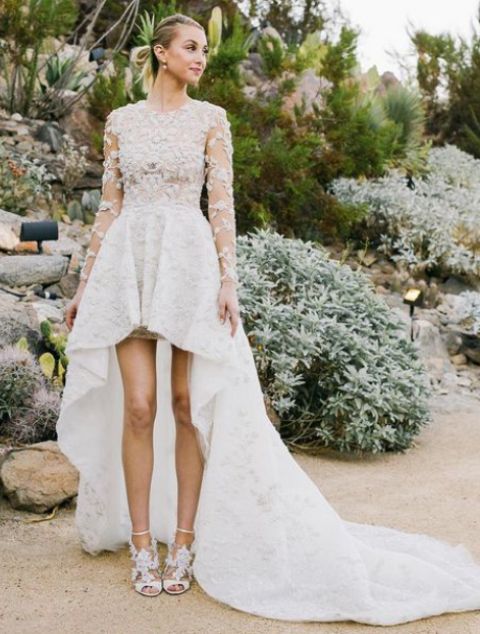 One of the most recognized faces on American television, Whitney Port, got married in a wedding dress from Ashi Studio which was nothing short of a showstopper. The waterfall hemline, lacework on the sleeves, and the one-metre long train was said to have been modelled after an Italian chandelier. 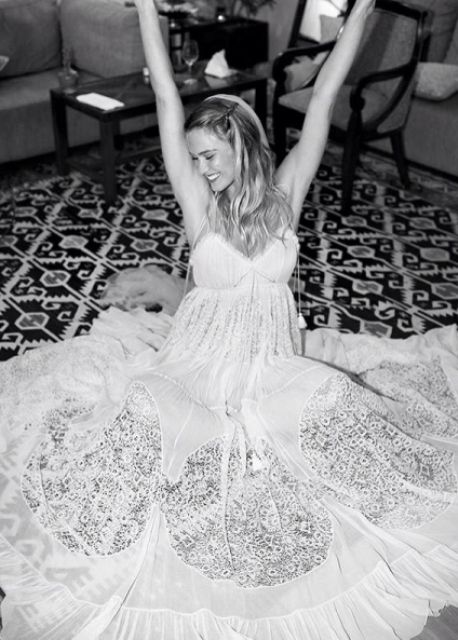 Bar Refaeli’s white lace Bohemian style wedding dress left everyone stunned with its sheer simplicity and elegance. Leonardi DiCaprio’s famous ex seems to have moved on in style, with a dress custom-made and designed by Chlo, which had ruffled trims, ribbon straps, intricate lace work throughout the bodice, and an asymmetrical hemline. 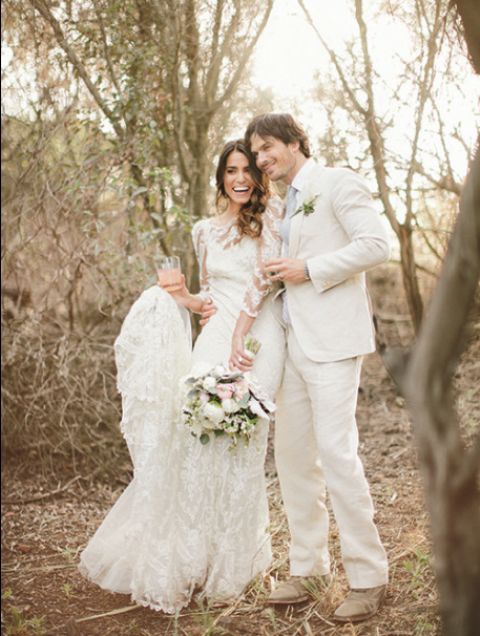 The famous Twilight star married her boyfriend of nine months, The Vampire Diaries star Ian Somerhalder, in a laid-back backyard ceremony. Her gorgeous wedding dress was designed by Claire Pettibone and had exquisite lace work, and a stunning backless bodice gave way to quarter-length sleeves. 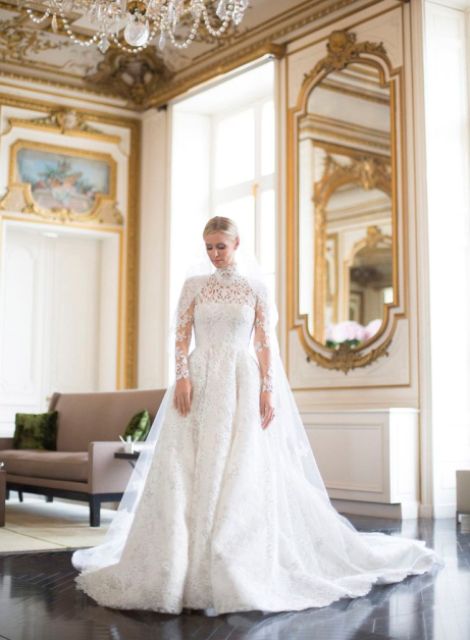 Nicky Hilton’s Valentino dress was definitely the stuff that dreams are made of, and she looked nothing short of royalty in her custom-made, lace, full-sleeved number. Appropriately, she got married in Kensington Palace in that jaw-dropping dress of hers, which cost $75,000! 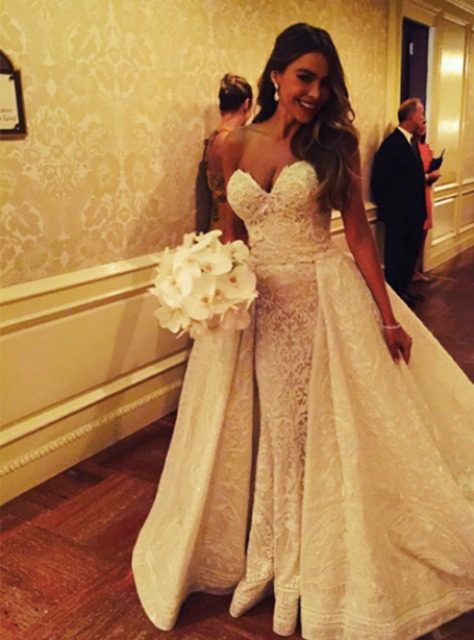 The Modern Family star wore a wedding dress that would want to make you curl up on the floor and cry for hours, just because of its sheer beauty and elegance! Sophia Vergara and Joe Manganiello’s wedding is possibly the wedding of 2015, and so was her dress, that is why she gets to be #1. Custom-made by Zuhair Murad, the column dress had an overskirt embroidered with lace, crystals, ruffles, and it took a whopping 1400 hours to make!