Which Type Of Mother-In-Law Do You Have?

My girlfriends and I can write a thesis about the alarming rate at which the mother-in-law woes of the world are shooting to an all-time high. Usually, our notes are exchanged over endless rounds of martinis- coz that’s really what it takes to check the amount of baggage we didn’t know we were claiming as the ink on the dotted line of the marriage certificate spelt out our name.

No, seriously- legal as everything is, my girlfriends and I believe no reason valid for calling a mother-in-law a mother-in-law coz to be extremely honest, these in-laws are actually outlaws who are out to rob our marital bliss at every step of the way. Now don’t get me wrong, am sure the monster-in-law stereotype is fading away (?) and you may have a doting mother-in-law (WE aren’t very sure this breed exists) but we can, with the certainty of ‘the sun rises in the east,’ declare that no matter who your mother-in-law is, she comes with one supremely singular built-in flaw- the label that makes her a mother-in-(f)law… 😛

Suggested read: 5 tips to break the ice and build trust with your mother-in-law

In fact, the odds for finding a good mother-in-law are slimmer than landing an ideal mate on Tinder- is one of the accurate inferences drawn on one such night when drinks and mouths overflowed.

Don’t believe me? Check to see if years of experiential learning has taught me all about the mother-in-law species..Also, I have a lot of alcohol in me as I write this (yep, I just returned from one such night-out), but they say alcohol makes you say the truth..so…. 😉

This woman’s life and everything in it is far more important than your own. She is busier than you, has more ‘important’ stuff to deal with and God forbid, if you are a homemaker and a stay-at-home mom, she will tell you that you do nothing purposive with your life save being a coffee-chugging couch potato who binge-watches trashy TV shows and hogs on bonbons!

BEWARE brides. This woman is never going to see you as her own daughter but more as a son-stealing interloper determined to whisk him away from her forever! You will never win her over, and if you do, well, share the secrets, girl! 😉

3. The ‘I know what’s better for your kids’ mother-in-law

This woman will discount the importance of one candy/day rule, the no TV at night and timeout regimen and spoil your kids but tell you off when you follow suit just to spite you! Either way, she is telling you that you do not know how to bring up kids, posing the son you nabbed for a husband as a wonderful example of her parenting  skills! If only, you could tell her you live with him and there’s enough scope for improvement! 😛

This one is the matriarch who does not want to relinquish control, ever. So, in case, you packed along some crowns to rule as the queen in your husband’s kingdom, you might as well let them rot in the suitcase, coz this mother-in-law shall never give you a chance to wear one!

Thought peer pressure ended in school? Wait until you marry and meet this one! If your mother-in-law is a victim of OCD (no matter the type), God bless your soul! Your meals will always be average, your dishes and pans rotting in the sink, your laundry never folded right and your house messy and chaotic. On the plus side, if her OCD is extreme, she may just set some of these ‘wrongs’ right as she lectures on!

This mother-in-law suffers from an extreme case of diarrhea of the mouth. In fact, she even waits for that shit to hit the fan and the resulting poo pourri to be inhaled by other vulnerable members of the family (most probably, including your husband)- so that the manipulation lends way to a fight she can further gossip about!

This one thrives on drama. If there exists a human black hole, she is one! She will suck up all emotions- only to pull off a stunt that can rival the most stinky episode of Desperate Housewives.

This one wants you to keep pace with her- at all times. So, call her- when she is going for a trip, when her plane lands, when she has had dinner, when it’s time for her to pop her pills, when it’s time for goodnight and then again in the morning and then, when she takes a dump and two hours later and when it’s hot and then, when it’s cold and when her cousin’s best friend’s daughter meets her and she has to tell you how she might have been a better match for your husband- so…well, yeah!

Suggested read: 20 ‘simple’ ways to get in your mother-in-law’s good books

This one treats everything in life as competition. She will tell you about how well she brought up her son, how she can whip up a fancy meal way early and better than you, how she has better taste in clothes, how she has got the financial chops and maybe even how her sh*t smells better than yours! I don’t know how you fight that and win!

This one shall never get her nose and prying eyes out o your household. From every penny you spend to the clothes you wear, she needs to know everything! Why her son stays out late, whether you are wasting money on high-end brands and even if you’re doing it- right!

This one’s fairly easy. These types are everywhere. Only it’s worse if she pretends otherwise in front of her son!

12. The ‘I want grandchildren’ mother-in-law

If there were a clock going tick tock reminding you how you can be the vessel for bearing kids only for so long, this woman is it! She’s fairly decent except that she wants you to do it so your vagina can pop teeny tiny human beings as soon as you said ‘I do.’

May you be equipped with patience for this one. She wants to spend ALL the holidays with you! Doesn’t let the holidays seem like holidays! Just that!

14. The ‘you are not good enough’ mother-in-law

Snide remarks, backhanded compliments, ‘helpful’ advice and sarcasm drenched camaraderie are her favorite tools. Her modus operandi comes replete with cocky quips and rolled eyes and lets it be known that you can never be ‘good enough.’

This one has never outgrown her fervent parenting days of a frenetic toddler. She will still feed him luxe meals, do everything for him and exhort him to act like a spoilt mamma’s boy! Be careful- you don’t want that kind of crap flying about when you get home!

Suggested read: Why I don’t do marriage, even as everyone around ties the knot

Now now, if you have found this woman who loves you for loving his son and is supportive of your every move, hold on to her! This woman is the Holy Grail of MILs! I wish I had one! <sigh>

Anyway, I am sure you met your match in here. 😉

And just in case, you do have no. 18, would you consider swapping her with mine? Okay, fine- I know nobody in her right senses would chuck a winning lotto ticket but maybe if I…..umm, drinks? 😉 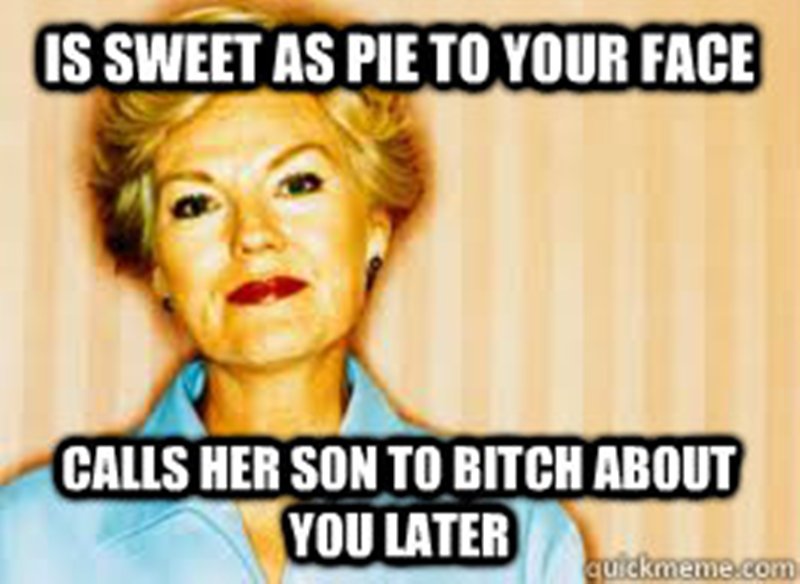 Article Name
Which Type Of Mother-In-Law Do You Have?
Author
Sejal Parikh
Description
Mother-in-law or mother-in-(f)law? Read and decide... :P