Yes, the Golden Globes were erm, for lack of a better word, golden and the Grammys saw some sizzling sirens set the red carpet on fire- but our desi divas were no less dazzling on the red carpet either. We gave you the Hollywood chapter of the best dressed celebrities on the red carpet this year and it is time to shake things up a li’l, back home! From Monisha Jaisingh to Sachin and Babi and Ralph & Russo to Elie Saab, our Bollywood celebs were dressed in the best of the best this year and pulled off some audacious RED HOT looks to make our red carpet lookbooks a lot more fashion-tastic! From turning our Fridays Fri-yay during the Filmfare awards to making the fashionistas in us ‘ooh n aah’ at the IIFA outfits, the leading ladies of Bollywood have us in a corner with their red carpet looks- because, no matter our backs hard up against the wall, we are hardpressed to pick n’choose!

So, we’ve got a sweet deal- we are rolling out the best red carpet looks of 2016- and you can help us decide which, among these, is worthy of the NLT Year-In-Review award in the category. C’mon, that’s only fair:

1. Aishwarya Rai Bachchan dressed to the nines for Cannes 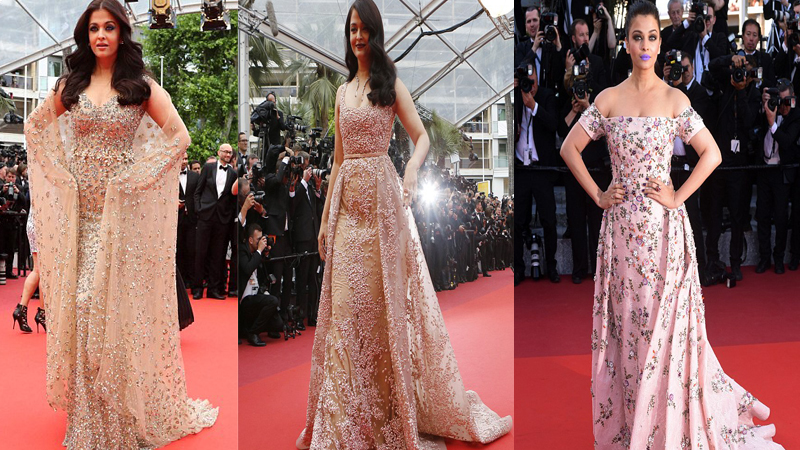 At the screening of Ma Loute, the 42-year old stunner looked dazzling in a glimmering gold Ali Younes gown. Studded with innumerable shiny sequins and topped with a sheer cape featuring similar sparkly embellishments, the gown became one with the woman who has turned not into anybody’s ‘zaroorat,’ but most certainly every dil’s ‘khwaish,’ and not just since Ae Dil Hai Mushkil burst onto the scene. Not only did she pull out all the style stops with her luscious locks worn out in loose waves dramatic blue peepers juxtaposed with a subtle pink pucker but upped the fashion game further with a floor-length beige Eli Saab gown at the BFG screening. The mother-of-one wore the ornate outfit, overlaid with delicate flowers with a pair of matching Salvatore Ferragamo heels and set off the delicacy of her  piece with a bold, audacious lip. Not to forget, she became the talk of the town when she pulled out a pretty pastel Rami Kadi dress in delicate pleats to flaunt with a purple pout! With a chic ponytail and a statement makeup, she drew all attention to herself at the Mal De Pierres premiere. 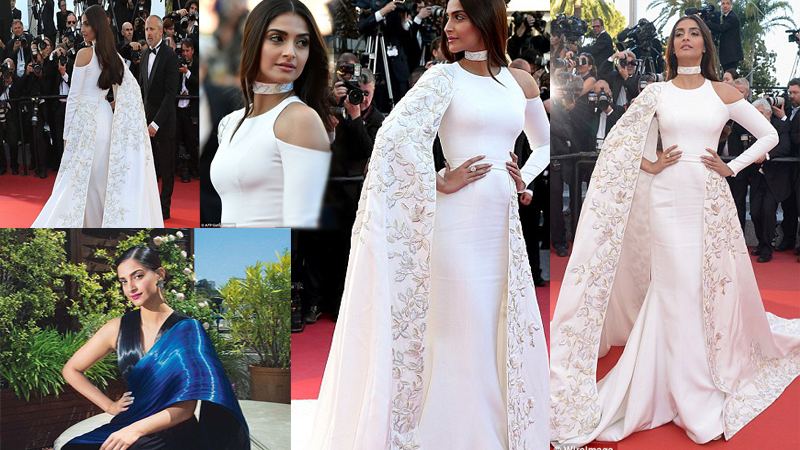 We cannot forget Sonam Kapoor when we are talking of Cannes regulars. Bollywood’s own fashion gal made her singularly distinctive style statement at Cannes this year in a breathtaking Ralph & Russo gown. After donning Anamika Khanna for two years straight, Sonam took to the R&R label and certainly, made heads turn at the Mal De Pierres event, even as Ash’s purple pout sent ripples all about. The 30-year old was dressed to impress in a magnificent white gown, cut-out across the shoulders and topped with an extravagant cape with leaf print splashed all across the borders. The choker feature added a dash of sophistication to the outfit and Sonam’s subtle makeup furnished just the elegance needed to round off the look. Of course, the Rimzim Dadu outfit in bold hues of blue worn for a photo session overseas is worthy of mention as well. Sonam, though, loves Khanna and wore an Anamika Khanna to the 61st Britannia Filmfare Awards and looked every bit the flawless fashionista she is! 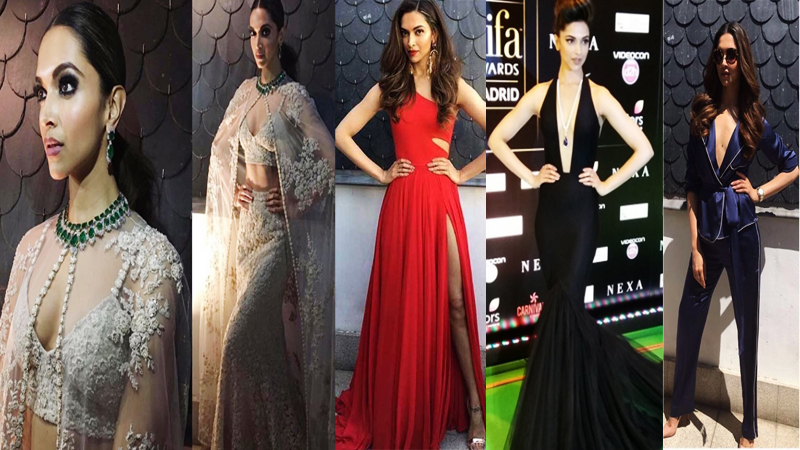 All things said and done, if there is one lady who took to nailing the F-game (and we mean fashion, folks!) after sending off all B-town charts in hyperdrive and gliding away with all the awards last year, it is Deepika Padukone. On-point for every appearance she has made, whether in Madrid for IIFA or at Filmfare in aamchi Mumbai, she has been fashion-tastic- looking fierce, ravishing and delicate, all at once. Noteworthy among her red carpet looks are Sabyasachi’s bolero-inspired white confection worn to the IIFA premiere, a royal blue suit in a plunging neckline by Chloe, a RED HOT Prabal Gurung gown worn on day 1 of IIFA and of course, the Swapnil Shinde magic worn on the final day. The first outfit was inspired by Spanish bull fighting rituals and featured a Godet skirt and an embroidered cape that the stunner topped off with elegant emeralds while the suit by Chloe was a seemingly dressing-robe inspired pantsuit that the Chennai Express actor wore with Christian Loubotin pumps, flowing hair and simple makeup! She looked every bit a goddess in a red Prabal Gurung, paired with statement Outhouse jewelry and luxury sandals from the house of Giuseppe Zanotti. As for turning all stunners on the green carpet green with envy, she took to the brave, bold and audacious Swapnil Shinde black gown, paired with Farah Khan fine jewelry and  rings by Anmol jewelers. Her striking hairdo and bold eye makeup completed her look, as she sashayed down the aisle with elan. 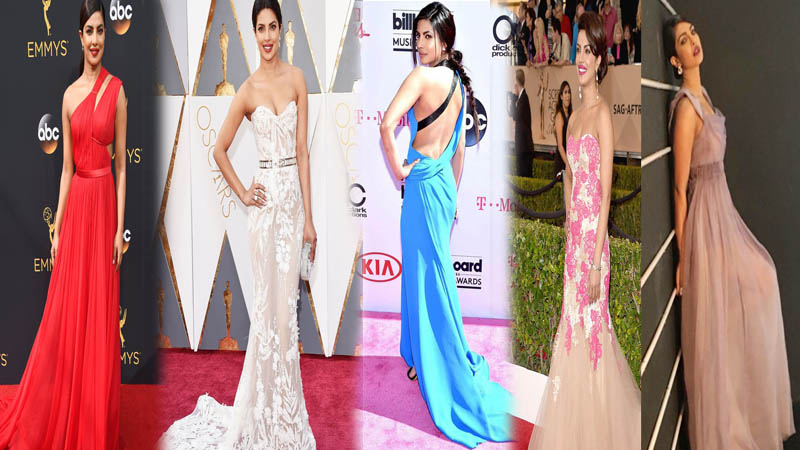 Wowing in white, PeeCee stole all hearts as she glowed in a fit-and-flare Zahir Murad sheer strapless number at the Oscars. What’s more, she completed the look with Monique Lhuillier shoes, a matching clutch and Lorraine Schwatrz diamonds worth a whopping $3.2 million! Tell me she didn’t like look a million bucks! Adding to the her series of striking appearances, she wore a bold black and blue Versace gown to the Bilboard Music Awards- looking a chic hottie! At the Emmy Awards, though, our Quantico star took to a you-can-never-go-wrong-with red number, a Jason Wu crimson gown while opting for a princess-look for the SAG Awards in a Monique Lhuillier mermaid gown that hugged her perfect curves, as she lent a flair of finesse to her look with matching teardrop earrings and a statement updo.  Back home, though, she sizzled in a flowing chiffon gown from Schiaparelli, paired with classic Cartier jewelry. 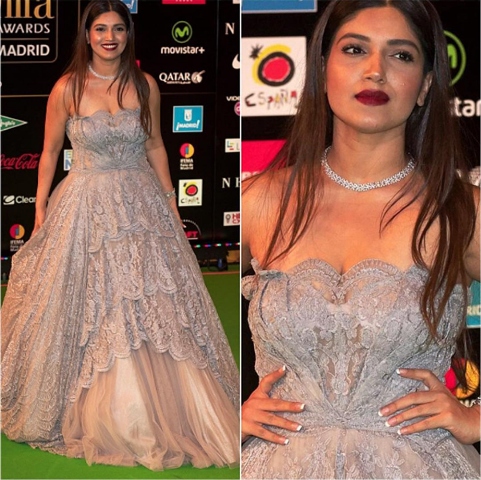 Bhumi Pednekar made a distinctive statement of her own in a gorgeous grey princess gown with lace overlays at the IIFA night. The actress looked stunning in the Shantanu & Nikhil outfit, pairing them with diamonds and a bold pucker. We do think that an updo might have gone well instead of those flowing tresses. 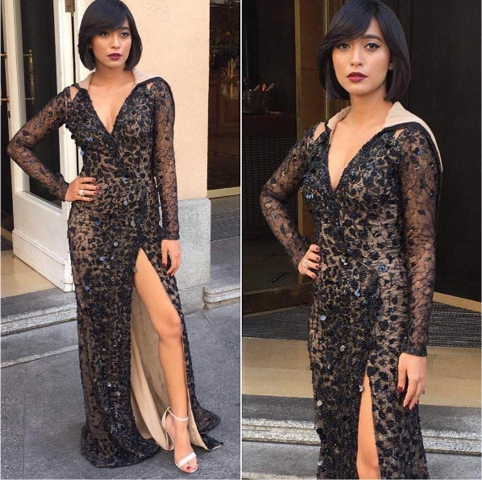 The girl from Margarita With A Straw surprised all fashionistas by taking to a La Bourjoisie gown with a deep neck and an interesting sailor-like skin-toned flap at the back. Styled by Sheerja Rajgopal, the bold slit, bold lip, bold bob combination really cut deep and left its mark in the hall of fame for the urban chic! A job well done!

7. The newbies playin’ it right 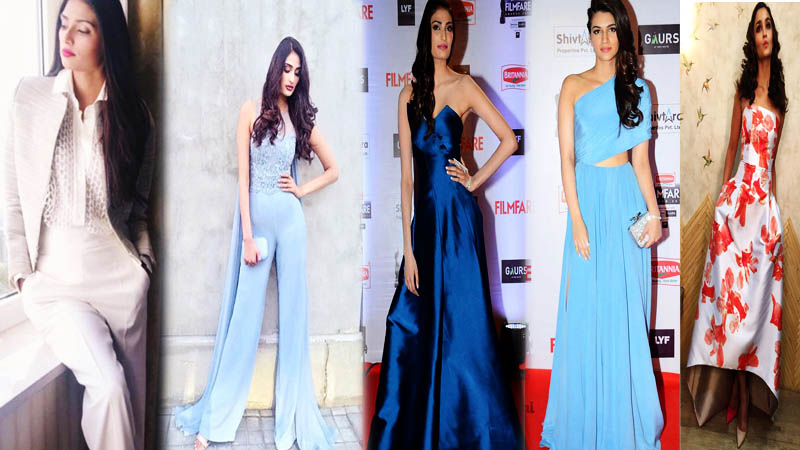 Athiya Shetty played it right with a jacketed white pantsuit and laced blouse designed by Bibhu Mohapatra for a regular IIFA daytime look, while opting for a Rayane Bacha jumpsuit in the Pantone color of the year with a matching clutch, neutral sandals and a berry lip for another day! She took to a Monisha Jaisingh for the Filmfare night, while Kriti Sanon stuck to a flattering cerulean by Nikhil Thampi. The cuteness overload, though, came from Alia adorned in a Sachin and Babi, wearing mismatched heels. Bebo-inspiration, we call it- a good one!

Suggested read: Here are the most “hearted” celebrity Instagram posts of 2016 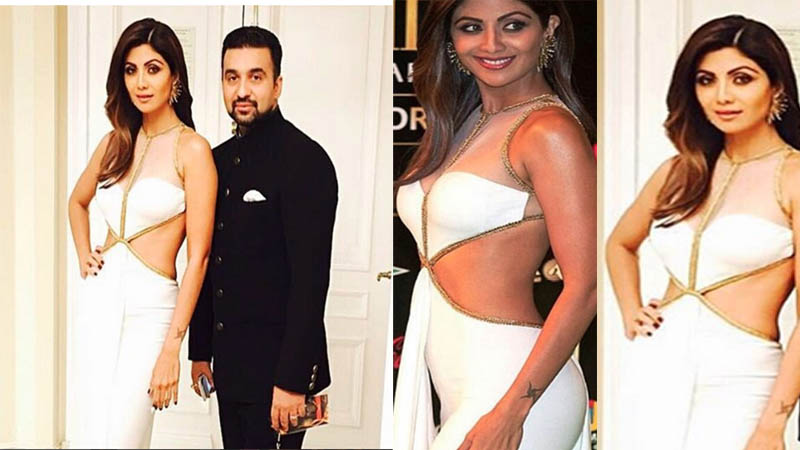 Which of these red carpet looks do you think should walk away with the trophy? Type away in the comments below. 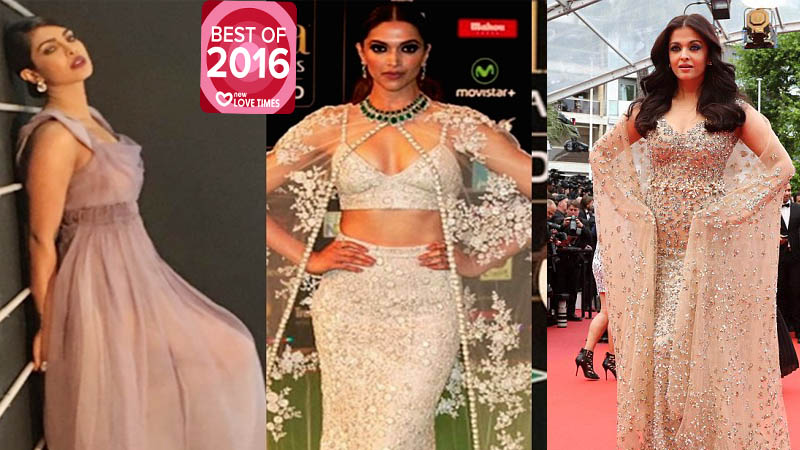 Article Name
#BestOf2016 The Bollywood Best Red Carpet Looks Of 2016
Author
Sejal Parikh
Description
We are rolling out the best red carpet looks of 2016- and you can help us decide which, among these, is worthy of the NLT Year-In-Review award in the category.