*Eye Roll* News: Paid His Neighbor To Impregnate His Wife And Then, Sued Him!

A court in Stuttgart, Germany, is faced with a bizarre hearing. It must decide on a case of ‘honorable’ intentions in a situation where a man hired his neighbor to get his wife pregnant!

Demetrius Soupolos, 29, and his former beauty queen wife, Traute, decided that they wanted kids. But after several failed attempts and an invasive medical examination, Demetrius was told he was sterile. So, Soupolos hired his neighbor Frank Maus, 34, to impregnate his wife. Since Frank looked a lot like Soupolos and had two kids in marriage, the plan seemed an effective one. The cash that changed hands amounted $2500! Only – for three evenings a week for the next six months, Frank tried and tried and tried – and nothing happened!

72 failed attempts angered Soupolos as well as Frank’s wife. While Frank calmed his wife saying he was doing the job for the wads of green and not because he liked it, Soupolos insisted that Frank have a medical examination. Frank agreed for the same and lo – the result was that Frank, himself, was sterile!

This, then, forced Frank Maus’ wife to fess’ up to it. The kids weren’t Maus’, and now, Soupolos is suing Maus for a breach of contract and wants his money back. Maus, on the other hand, is unwilling to dish out the money and claims that he never guaranteed conception – only that he’d give it an honest shot! 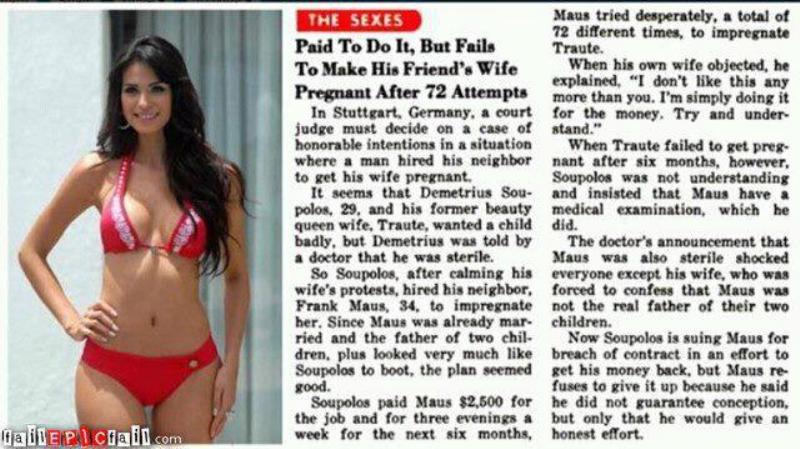 Article Name
*Eye Roll* News : Paid His Neighbor To Impregnate His Wife And Then, Sued Him!
Author
Sejal Parikh
Description
You wouldn't believe what happens next!